The Maharja of Kalindi was taken prisoner by the warriosof Kishkindhain a battle between the two states in which Kishkindha was victorious. He could be released only if Shibani, little princess of Kalindi would be given in marriage to the prince and heir apparent of Kishkindha.

The princes already in love with a young man of her choice had to choose between love and filial duty. She sacrificed the former to the latter. Subsequently she had to be the guest of Kishkindhaon the occasion of the announcement of her betrothal and the installation of the prince as the ruler.

This literally broke the heart of Timir, the chosen lover of the princess, who saw his love being so lightly kicked.  He decided to bid good bye to Kalindi accompanied by the members of his troupe.

AshitBaran, the younger brother of the prince of Kishkindha happened to notice Nilama, one of the members of the troupe and a young girl endowed with exquisite charms. Designing to use her excellence in the art of dancing as a weapon in his armory he took Nilama with him to his own castle.

A few hours before the installation ceremony, AshitBaransucceeded in administering to his elder brother, during a dance performance by Nilamaand through her agency, a hypnotic drug which would keep him in slumber for several hours. He would have thus become the ruler of Kishkindhain the absence of the rightful heir who was not present at the ceremony of installation, but the foresight and keen intelligence of Prime Minister Phalgunifrustrated his evil design. Phalguni had discovered Timir, who resembled in all details the Prince and having dressed him in royal robes, fitting the big occasion, Phalguni presented Timirin the nick of time and got him installed as the ruler.  AshitBaran could hardly believe his eyes but he washelpless.

AshitBaran locked up his elder brother in a secret place and applied himself to finishing Timir. He again tried his old weapon­ Nilama - but his efforts again met with frustration. And yet, he wasneither dismayed nor discouraged and went on with his evil designs.

When Prime Minister Phalguni asked Timir - now personated as the Maharaja - to make love to princess Shibanihis heart trembled. His soul, already immersed in love for Shibaninow began to struggle under the heavy strain of duty. He often tried to speak plainly to Shibaniand divulge the truth to her but every time the prime minister happened to arrive in the nick of time and prevent him from doing so. Shibani'sheart had already recognised Timirin the guise of the Maharaja, but the fake Maharaja got no encouragement from her in revealing his real identity to Shibani.

On the other side poor Nilamawas all along dreaming of the success of AshitBaranin usurping the gadiof Kishkindhaand of becoming his Maharani. But when she found out that AshitBarandid not covet the throne alone but also Shitani with it, she found herself undeceived. She did not take Jong to find out a helper. Her charms soon secured for het AshitBaran'smost trusted man, Shakuni, as a helpmate who became ready to upset the designs of his own master.

Some incidents later on proved it beyond doubt to Shibani that the Maharaja of Kishkindha was none else but her own Timir. Her heart jumped with emotion at the opportunity of renewing her old love. But Timir reminded her of the great sacrifice she had made for the freedom of her father from bondage. She was in duty bound to marry the real Maharaja and it would be disgraceful of her if she reduced to ashes the great sacrifice and the filial affection which had made her great. Time demanded silent and complete submission to fate. Such was Timir's advice to Shibani.

But who knew what the will of the Almighty was? Who knew how would AshitBaran get himself entangled in the various snares he was putting up for others? And who can tell how the wheels of destiny would move so as to punish evil and let truth triumph?

For all that you will have to watch what follows on the screen. 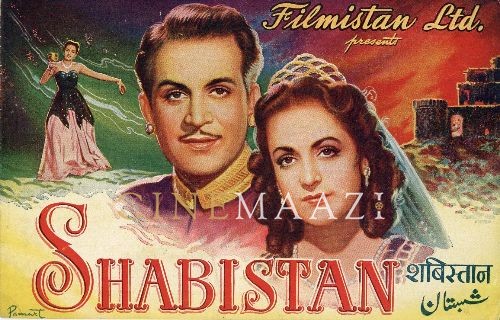