SEETA'S Swayamwer ' was being celebrated. It was the marriage ceremony of four daughters from Janak's family to four sons of Dashrath.

After a little happy time, Bharat went to his maternal uncle's capital. Meanwhile, his mother Kaikayi goaded and guided by her chief maid ' Manthara ' demanded two boons from her husband, Maharaja Dasharath father of Shri Rama and Bharat.

She demanded throne for her son Bharat, and 14 years' Vanvas (simple forest living) for Rama.

There upon Rama with his another devoted brother, Laxman and his wife Seeta, left Ayodhya in spite of great entreaties from father, down to common man of Ayodhya, to stay.

Bharat was in no way less devoted to his elder brother Rama, took his own mother to task, threw away the offered throne, and went after Rama, to bring him back to Ayodhya.

Dasharath was already dead of a shock as a result, Rama leaving Ayodhya.

Rama, as a 'Khshatriya' refused to turn back from voe already taken to fulfill the promises given by his father. Thereupon Bharat took a voe not to set on the throne live as simple as forest life as Rama and decided to enter fire alive, if Rama did not return at the end of fourteenth year, as per his promise.

After fourteen years when Bharat did not find any sign of his brother's return, he prepared to enter the fire but.

The screen wants you to tell you in the most dramatic way, the immortal story of Ramayana,' which you will realise only after seeing our '‘Shree RAM BHARAT MILAN………. 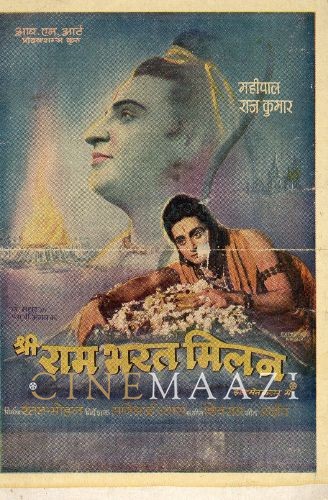