This is the sacred story of Sixteen Fridays vow of the Great Goddess Santoshi Mata, the Goddess of satisfaction and content, blessings and happiness.

MOHAN and KAUSHALYA, while celebrating the birthday of their only child Munna on Diwali night misfortune took away the life of Mohan when he tried to save his child from fire. Kaushalya became widow and to bring up her child she accepted the job of a maidservant in a Seths House and to save her chastity from Seth's hand, one day she killed the Seth and ran away to Bhola, a well-wisher, handed over her child to him and requested him not to tell Munna about her past Ultimately she was put behind the bars on charge of Murder.

Bhola lived in a Ashram of Santoshi Mata along with Munna to whom Pujari of the Ashram gave the name "Heera". Heera was brought up with Roopa, the only daughter of Pujari of the temple. along with Phulwa, the Malls daughter, and Rajkumar the son of miser man Karodimal who never belive "Maa Santoshi" Yeats passed, Heera and Roopa started loving each other. But Jagirdar of the village also had an eye on Roopa's blossoming beauty. He came in between Heera and Roopa, just like a wall.

When Pujari arranged Heera and Roopa's marriage, Jagirdar came in between and stopped the marriage declaring that Heera is a person about whom nobody knows from where he has come. Nobody knows about his parentage and family. That the two lovers teem were separated for ever.

Whether Heera was found by his Mother? Whether Roopa could get back her husband Whether by the vow of Solah Shukrawar they could receive the blessings of Santoshi Mata?

For the answer of all those and other questions, you will have to witness " SOLAR SHUKRAWAR" a movie full of moving sentiments, devotion and songs full of lilt and love situations full of unbelievable miracles and showers of blessings of Santoshi Mata. See SOLAH SHUKRAWAR with your family and fell the happiness. 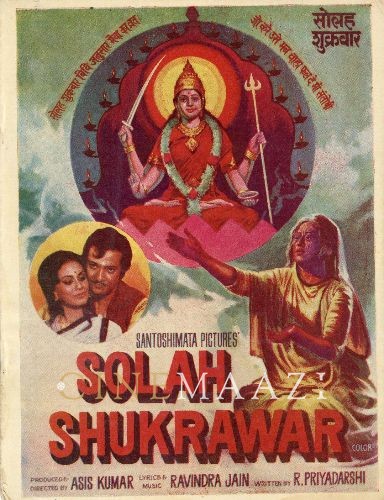