This is the love story of a modern girl, spoilt and impetuous, a girl who is as fabulously beautiful as she is rich. Her methods are uncommon, her approach unusual. Even in matters of love, her approach is unique and novel. Usually a girl stoops to conquer her lover’s heart by quiet dignity and modesty rather than by a display of foul temper. But Shefali is a class by herself. She begins her saga of love—which is as tempestuous as her nature, by not whispering sweet love words in the ears of her lover, but by slapping him in the presence of all. But her lover, Shekhar, who is a struggling insurance agent, understands her and, as are the ways of lovers, unpleasantness is forgotten and only sweet moments remembered.

Shekhar is a man of poor means and is compelled to sell the trophy he has won at a function in his club. Shefali, who knows that Shekhar is too proud a man to ask her for any financial assistance, buys back the trophy and, in hilarious circumstance, gives it back to him. This thing happens thrice. But then fate intervenes, and then hilarity turns into a tragedy, casting its ominous shadow not only on those two lovers but also on their families.

Shekhar is arrested for having stolen the trophy and sentenced to a jail term, thus begins the cycle of misfortune. Both his parents are ill. But his mother is critically ill that she can’t look after his little brother and sister who are mere children. There is no one to look after these children.

Shefali whose love has mellowed, faces to the challenge of the grave situation. She unhesitatingly sacrifices all the luxury and comfort of the city and goes to Shekhar’s village to nurse his ailing parents and look after his little brother and sister. Thus she affirms her love. But all her efforts to save Shekhar’s mother are futile and she succumbs to her ailment. After some time Shekhar’s father also dies. The burden of the successive misfortune cripples Shefali’s mind and body, and she becomes very ill.

After completing his sentence, Shekhar returns home and finds Shefali who he thinks is the reason of his disgrace and the death of his parents, pours out all his latent wrath and hatred against her.

Shefali wanted to explain but he is in passion of rage and he turns her out of the house.

The futility of her love and existence becomes apparent to her and she decides to end her life. She runs to put an end to her life but could she? Are the bonds of love so weak that a ere misunderstanding snap them? See the answer on the screen in the dramatic unfolding of this great story of love and sacrifice. 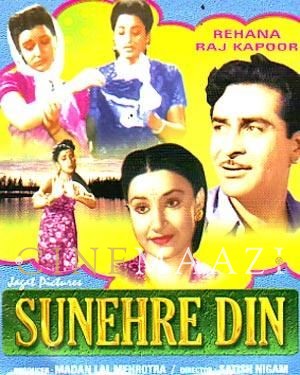