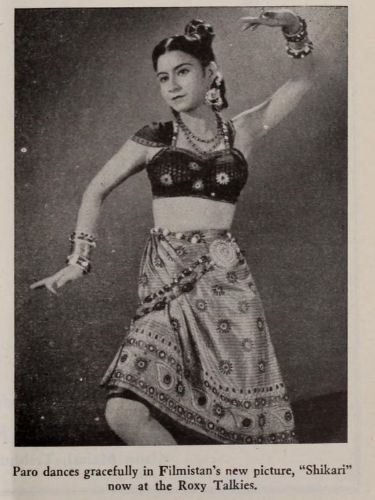 Paro Devi was introduced in the Hindi cinema by Savak Vachcha in Shikari (1946) as a side-heroine. The film had Ashok Kumar and Veera in the lead roles. Paro Devi played a Burmese tribal girl who was headstrong and aggressive. Paro was a good singer and songs picturized on her were sung by her including the songs, Chupo chupo o marne se darnewalon and Rangeela re, jawani mein sata ke kahan kahan gaya re. The music was composed by S.D. Burman. The film was a huge box office hit. With this, Paro, as an actor-singer, signalled her arrival in the Hindi film industry.

In his book ‘Stars from Another Sky’, Saadat Hasan Manto mentions that it was Dattaram Pai who showed confidence in her and hired her in the studio. She came from the courtesans’ quarters. Hailing from Meerut, she was a big hit among the rich men of the city. She came to Bombay to become an actress. She entertained only the high-grade clientele both in terms of affluence and eminence like Josh Malihabadi and Saghar Nizami. It is believed that one of her admirers may have recommended her name to Shashadhar Mukherjee of Filmistan when he was finalizing the cast for the film Shikari (1946).

In Heera, she played the lead role opposite Ishwarlal who also directed the film. Out of the 11 songs in the film, as many as 8 songs have been rendered by Paro Devi - both solos and duets. Her song Waada yaad karke….chale aana morey raaja waada yaad karke, a duet sung with G M Durrani, became very popular. The song is written by Qamar Jalalabadi and composed by Husnlal-Bhagatram. This was one of the very few occasions when she bagged the lead role in a film.

Her most memorable role was opposite Dilip Kumar and Kamini Kaushal in Shabnam (1949). The film was a box-office success mainly because of its dances and music. Three of the Mukesh-Shamshad duets were picturized on her and Dilip Kumar – Tumhare liye huwe badnaam, Tu mehloun mein rehnai walie and Pyar mein tumne dhoka seekha.

During 1946 to 1950, Paro Devi acted in 16 films, but barring a few, she was mostly in the capacity of what is known as a side heroine/ character role. During this period, she sang around 40 songs featured on herself. However, because of her peculiar voice quality which was considered more suited to coquettish songs than soft love songs, she had to lip-sync in the voices of other playback singers. For instance, in Shabnam (1949), music for which was composed by Hansraj Behl, Shamshad Begum sang four songs for her including Tumhaare liye huye badnaam.

From around the mid-50s onward, Paro Devi was mostly relegated to character roles. Her role in Angarey (1954) was appreciated.

In her acting career spanning over three decades, Paro acted in 88 films.

As a former courtesan, singing came naturally to Paro. Sadly, despite having a good voice, music directors rarely used her voice for playback singing. In view of her background as an entertainer with pleasing manners, she had an impactful screen presence but often the film’s director had to struggle to extract from her the required expression and dialogue delivery commensurate with her role in the film.