On the day of `Naag Punchami' people had gathered in the temple to celebrate the festival. The maidens of the village had brought milk for the Sunehri Nagin and Vijay was trying to please 'Naag Devta' by playing on the 'been'. The Princess who had also come there was so overwhelmed by the enchanting tune that she could not help breaking into a dance. Sunehri Nagin being highly pleased with her, drank the milk from the cup brought by the Princess.

The magician followed the Princess with a view to kidnap her, when Sadhana withdrew him in the magic city through her magic. Sadhana was the daughter of his 'Guru' but she did not know that he was the murderer of her own father. The magician again told a lie to her and said that he wanted to obtain the 'Kangan' only to get her father released.

Thus being duped Sadhana gave him a PILL by holding which in his mouth he could render himself invisible and could go wherever he liked.

With the help of this pill the magician kidnapped the Princess and carried her to the cave where the Sunehri Nagin was guarding the Kangan. Vijay saw this and followed him closely. A fight took place between Vijay and the magician and during the fight the pill got dropped in water with the result that the latter had to take to heels.

When the King came to know that the Princess was in love with an ordinary person like Vijay, he told her that a 'Swayamvar' was fixed for her after three days, and then if she took any wrong step, the responsibility of his death would lie on her shoulders.

Though the magician was defeated by Vijay in a duel on the day of the Swayamvara, he carried away the Princess on the magic carpet brought from Sadhana. On seeing this, the Maharaja was shocked, but Vijay consoled him by promising that he would rescue the Princess and restore her to him.

How Vijay reached the magic city, what were the difficulties that he had to overcome, and how he rescued the Princess and brought her back to the Palace... to know this better see the picture on the "SCREEN". 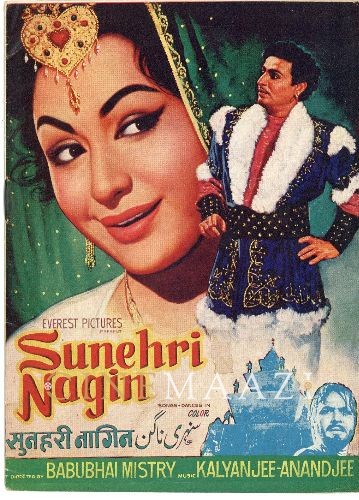