The story of sacrifice, self-denial, and penance of the Indian Motherhood forms a golden page of the World history Self-respect of the Indian woman on account of which we can hold our heads high will be ever cherished by us. From time to time the Indian motherhood has infused life in the benumbed body of our Nation. The Indian history will always be beholden to the motherhood who has given birth to immortal personalities like Parshuram, Shri Ram, satis like Sita and Savitri, and Lord Krishna, the Supreme Singer of the Gita.

The present picture also depicts the tale of sacrifice and self-denial of such a mother. She has put up an illustration before the world that no power on the earth can deviate a mother from her firm determination, come what may. The heroine of this story is Chitrangada, the daughter of the King of Manipur.
Chitrangada was married to the great archer Arjun. A few days after the wedding he (Arjun) left Manipur. On his return, he saw a boy on the lap of his wife Chitrangada. Having been blinded by human nature, physical prowess, and power of position he could not recognise his own son and doubted the chestity of his wite, Chitrangada. He deserted her who without any grumbling put up with the slur. But Naradji could never tolerate it. Even the self-denying Naradji was moved by the tears of the woman who registered her protest through silence. He made Chitrangada conscious of her latent power and told her that God is the creator of this universe but it is the mother who shapes the future of the world. Having been thus emboldened Chitrangada made up her mind to prove to her husband, Arjun that the boy Babhruvahan was none other than his own son.

Having been reared up under his mother Chitrangada's care Babhruvahan, when he became a fine young man learnt that the Pandavas were to perform the" Ashwamedh Yagya "Horse Sacrifice). He decided to fight with Arjun For a moment Chitrangada could not imagine the very thought of a fight between the father and the son but soon recollecting the slur cast on her by Arjun, she decided to send her son Babhruvahan to fight his father, Arjun.

This was a very strange battle. On one side was the father, on other the son. Babhruvahan, the son won the battle. Lord Krishna, friend, philosopher, and guide of Arjun was surprised at the miracle. On the battlefield, Arjun's head was lying cut off from his body. Chitranoada was weeping bitterly. The Lord was silent. Right at the moment Naradji arrived on the spot and declared that it was a victory or the motherhood. Thereafter several events took place Babhruva Han's adventures, Naga's victory and through Shri Krishna's grace, a new lease was given to Arjun's life.

Today we very badly need mothers like Chitrangada who can give birth to sons like Babhruvahan and inculcate in them virtues so that they can make the nation strong and help us to hold our heads high before others sister nations of the world. 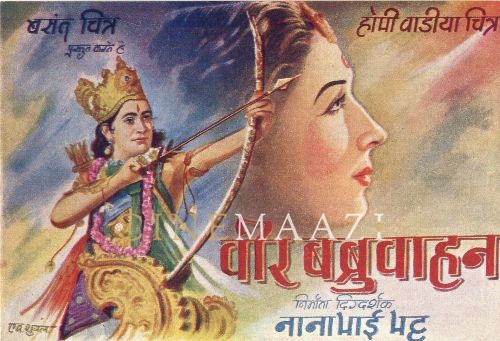