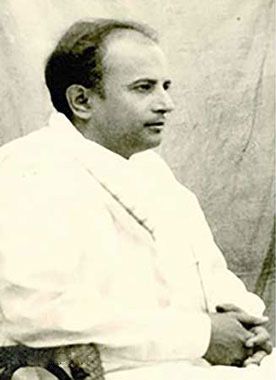 One of the most successful lyricists of bengali cinema of the 30s and 40s, Ajoy Bhattacharya's songs were the driving force behind the box office viability of many a classic film.

Born in 1906 in Shyamgram in present day Bangladesh, Ajay Bhattacharya pursued his studies in Bongobasi College, Victoria College and later in Calcutta University. In Kumilla, he was involved in theatre, both as a playwright and actor. While he was a student he came under the influence of Kazi Nazru Islam. Thus developing his interest in poetry, soon his poem 'Ulka' was published in Dhoomketu magazine. After finishing his studies, he taught in Victoria College and later in Tirthapati Institute in Kolkata.

He also picked up the director's baton for Ashok (1942) and Chhadmabeshi. Writer of many volumes of poetry, novels, stories and translations, he left his mark in the sphere of literature as well.

Ajay Bhattacharya passed away at a young age in 1943. Even in this short span he left behind an influential and memorable body of work.