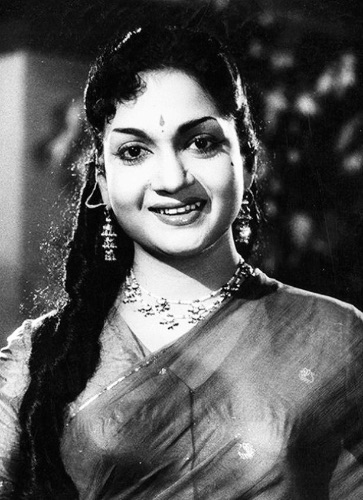 Anjali Devi is a legend in the history of Indian cinema with an incomparably prolific inning spanning 400 films over sixty-five successful years. She was one of the earlier actresses in Tamil cinema to have experienced multi-lingual success in Telugu, Tamil, Kannada and Hindi.

Born on August 24, 1927, in Peddapuram in East Godavari district as Anjamma, her name was changed to Anjani Kumari when she appeared on stage as a child artiste at the age of eight, in the role of Lohitasya in Raja Harishchandra. Later, when she transitioned to cinema, she was rechristened Anjali Devi – a name that would go on to become a household name over the next few decades.

Interested in theatre, she joined the amateur troupe Young Men’s Happy Club in Kalkinada. It was a mixed group of professionals from different walks of life. Here she met her husband, P Adinarayana Rao, a writer, lyricist and musician. Anjali Devi’s first recognition came in 1943 from Sir Arthur Hope, the governor, in the form of a gold medal and a citation, in appreciation of the play Street Singers, written by her husband. Anjani Devi got married at the age of fourteen and was a mother of two sons, when she joined the film industry. She went on to defy conventional film industry wisdom that married women cannot be leading stars on screen as early as the 1940s. According to Anjali Devi, this was possible only because of her husband who supported her wholeheartedly.

Her debut film was Gollabhama (1947) by C. Pulliah. She played a daring role for her times which also included a kissing scene. She once told in an interview that the kiss was, in fact, a trick shot. This film became her springboard to stardom. She never looked back and went on to complete around 400 films as the heroine in Telugu, Tamil and Hindi. She shared her space on celluloid with legends such as M.G. Ramachandran, N.T. Rama Rao, Akkineni Nageshwara Rao, Sivaji Ganesan and Jayalalitha. A series of blockbusters in various languages followed Gollabhama - Mahatma Udhangar (1947, Tamil), Aadhithan Kanavu (1948), Bala Raju (1948), Mangayar Karasi (1949, Tamil), Raksharekha (1949), Keelu Gurram (1949) and others.

She dominated the fifties with her pairing with Akkineni Nageswara Rao producing many hit films like Swapna Sundari (1950), Anarkali (1955), Chenchu Lakshmi (1958) and Balanagamma (1959). Ek Tha Raja (1951, Tamil), Poongothai (1953), Panduranga Mahathyam (1957), Jayabheri (1959), Lava Kusha (1963) - and many more had Anjali playing the lead. In Tamil cinema she reached an elite tier of stardom with films like Kanavane Kan Kanda Daivam (1955), Manalane Mangayin Bhagyam (1957) and Adutha Veettu Penn(1960) which were all mega-blockbusters. Her films with MGR - Marmayogi (1951) and Sarvadhikari (1951) are appreciated even today. In Adutha Veettu Penn (1960) she starred with T.R. Ramachandran and Thangavelu, which was a remake of Pasher Bari (1952), which was later remade in Telugu titled Pakkinti Ammayi (1953) and Hindi titled Padosan (1968). She was also the co-producer of the film along with her husband. She learnt to speak Tamil and Hindi at the club and remembered MGR helping her with her Tamil diction.

Anjali Devi portrayed a wide range of leading roles, covering a wide spectrum of characters and later in several character roles playing sister-in-law and mother. Her roles highlighted several problems that plagued women in society. She started with a greyish character in Gollabham. In Keelu Gurram, an early career hit, she played the stereotypical vamp who is cruel to the royal family. The film remains popular till date. But breaking this image, she went on to do a pious role in Sri Lakshmamma Katha (1950). Lava Kusha was her landmark movie. Her portrayal of Sita in Lava Kusha was so iconic that she has come to embody Sita in the collective consciousness of Telugu film fans even today. It was a classic that took about six years to make. It immortalized the lead cast-NTR as Lord Rama and Anjali Devi as Sita. Her performance won her the President’s Gold Medal for Best Actress. In Swapna Sundari, an imaginary love story about a celestial being and a common man, starring ANR and Anjali Devi, Anjali as the Gandharva Kanya gave an ethereal performance. In Marmayogi, a film based on Marie Corelle’s novel, Vendetta, Anjali Devi, as the megalomaniacal mistress, gave a truly memorable performance. Though the character had shades of grey, she still won over the audience.

Anjali Devi famously earned equal wages, on par with the hero of Rs. 1016 rupees per month and her name featured in the top slots of the credits with the hero’s name following hers.
Anjali and her husband set up their own film production company-Anjali Film Productions, in the early 50s. Their first production, Poongothai, a bilingual film in Telugu and Tamil, was meant to be Sivaji Ganesan’s debut film but his film Parasakthi (1952) released first. Their production house was the first to use the slow-motion technique, hitherto not available in the South, and was renowned for their mellifluous music. With Anarkali, in which she cast herself in the lead, and Swapna Sundari, their production house zoomed to great heights and become a household name. The banner went on to produce twenty-eight films in Telugu, Tamil and Hindi including musicals like Runanubandham (1960), Swarna Manjari (1962), Sathi Sakku Bai (1965), Sathi Sumathi (1967),Bhaktha Thukaram (1973), and Mahakavi Kshetrayya (1976). The government of Andhra Pradesh awarded the Golden Nandi Award to Mahakavi Kshetrayya. Jayabheri, a film based on caste discrimination, was a big musical hit, which again had ANR and Anjali Devi in the lead. Bala Raju, a folklore-based love story, had a hundred-day run and Anjali Devi, as Mohini enthralled the audience with her dance numbers, especially in the song Theeyani vennela reyi.

While she appeared in few Hindi films, Ustad (1957) starring N A Ansari, Cuckoo and Master Bhagwan alongside her, was a success.

She produced a serial on Sai Baba for television. She suffered severe financial losses in the making of a Hindi film. She bounced back after some time with the devotional film, Sathi Sakku Bai, followed by Bhaktha Thukaram. Both these films turned out to be multi-lingual super hits. Police Alludu (1994) marks her last film appearance.

Anjali Devi has been honoured by the states of Tamil Nadu and Andhra Pradesh. She has served as the vice president of the Film Chamber of Commerce, as a senate member in Sri Venkateswara University, Tirupati, and as the first woman president of the South Indian Artists Association. She won four Filmfare Awards for Best Actress (Telugu) for Anarkali, Suvarna Sundari (1957), Chenchu Lakshmi and Jayabheri. She also received an Honorary Doctorate from Nagarjuna University in Guntur. She was known for her keen sense of social responsibility and contributed generously towards the cause of education.

Anjali Devi passed away on 13 January, 2014. Her elder son, Chinna Rao, is a software engineer, and the younger one, Niranjan Kumar, a general surgeon. Both of them live in the US. Her granddaughter, Saila Rao, is also an actress.