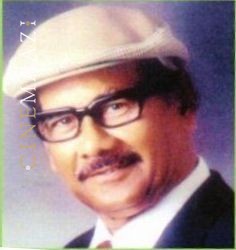 Cyriaco Dias, the famous character actor, has built his name on playing a Hindu Goan character, while at the same time donning the role of Jesus Christ with such ease that it has drawn praise from the late Cardinal Valerian.

At a young age he had a fascination for the dramatic arts and by age of seven he had sung two songs in a church feast drama. He wrote his first drama Zomin Amchi Hukum Tumchi? (Land is ours and rule is yours?) which he showed to the Rejidor (present Sarpanch) who rebuked him and advised him not to participate in theatre. However, on 9th May 1956 he presented a play along with local actors in which he did a famous comic role which baptized him as Charlie Boy when he sang seven songs which were well appreciated by the audience. Thus began his journey to become a famous dramatist. In the same year he participated in a play by Aleixinho de Candolim entitled Mhozo Ghov Basurkar (My husband is from Basur). His second drama’s name is Kitem Ho Sonvsar (What sort of world is this) which was followed by Chepekar Kunhead (Hat wearer Brother-in-law). At this stage, he had to leave Goa for private reasons and migrate to Mumbai.

During his stay in Mumbai, he got an opportunity to participate in a Hindi film. On the professional Konkani stage, he has acted in Remmie Collaco’s Satvo Sakrament (Seventh Sacrament), S. E Wizard’s Adeste Fidelis (Sing all ye angels). Prem Kumar, Rico Rod, Robin Vaz and C. Alvares have appreciated his talent. He has acted in eighteen tiatrs of C. Alvares, fourteen of Prem Kumar, thirteen of M. Boyer, seven of Dr. Simon Fernandes, four of Remmie Collaco, five of Jacinto Vaz, four of Robin Vaz, four of Alfred Rose and four of J. P Souzalin. He has also acted in dramas of Kid Boxer, Young Menezes, Souza Ferrao, M. Dod de Verna, H. Britton, Ophelia, Peter-Nelson, Chris Perry, Prof. Apolino Gomes and Francis Parra. He has earned fourteen awards for best acting which include Dr. Simon ‘s  Fatima Saibinn (Our lady of Fatima) as a Portuguese official, Prem Kumar’s Amchi Bhas (Our language) as a Hindu, Dr. Simon Fernandes’s Zoit Khorkhos Ostorecher (Triumph over a rough woman) in the role of Petruchio, M. J. D'Lima’s Soddvondar (Saviour) in the role of Jesus Christ, Jacinto Vaz’s drama as a god father, M. Boyer’s  Adim Tem Atam Hem (Earlier that  presently this) as an insane person, J. P. Souzalin’s  St. Francis Xavier in the role of  Ignatius Loyola and C. Alvares’s Mhozo Put Padri (My son a priest) in the role of a father. He bagged the best writer, actor and director award for Hench Tern Farikponn (This is the repayment) as well as the Konkan Singers Bahrain award.