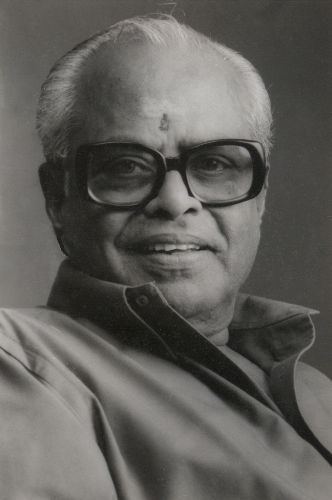 In the course of a career spanning 50 years and nearly 100 feature films, playwright and filmmaker Kailasam Balachander or K Balachander, as he was better known, carved a niche all his own in Tamil cinema with his distinctive style of filmmaking style, his mastery over unconventional themes, and his explosive contemporary subjects. Women characters often took centre-stage in his films, portrayed in well-written roles as bold, intelligent and independent. His films explored unconventional and complicated interpersonal relationships and social themes. In the course of his film career which started in 1964 as a screenwriter and progressed as director with Neerkumizhi (1965), going on to create several critical and commercial successes, he came to be issued the unofficial title - Iyakkunar Sigaram which translates as Director Paramount. Winner of 9 National Film Awards and 13 Filmfare Awards, he was honored with the Padma Shri (1987), India's fourth highest civilian award, and the Dadasaheb Phalke Award, India's highest award in cinema. A tough task-masker he nurtured several talents such as Nagesh, Sujatha, Kamal Haasan, Rajinikanth, Chiranjeevi, Jaya Prada, Sridevi, Jayasudha, Saritha, Renuka, Nassar, Prakash Raj, Ramesh Aravind and Vivek. Expanding into Telugu, Kannada and Hindi cinema as well, he produced films under his banner, Kavithalaya Productions, also directing TV serials, and acting in a few films.

Born on 9 July, 1930 in Nannilam, in Tanjore district, he was drawn to cinema at a young age, after watching the films of M K Thyagaraja Bhagavathar, erstwhile superstar of Tamil cinema. His childhood interest in acting, writing and directing amateur plays, continued as he studied to graduate in Zoology at the Annamalai University. Starting off as a school teacher after graduation in 1949, he moved to Madras the following year to join the Accountant General's office as an apprentice clerk. Joining the United Amateur Artistes drama company, he went on to form his own troupe, also writing an English play, Major Chandrakanth. Rewriting the play in Tamil made it accessible to greater numbers, and it came to be praised as a sensation. Balachander went on to write more plays such as Server Sundaram (Waiter Sundaram), Neerkumizhi (Water Bubble), Mezhuguvarthi (Candle), Naanal (Tall Grass) and Navagraham (Nine Planets), which he also produced and directed, winning positive critical reviews. His acting troupe also comprised actors from the Tamil film industry such as Major Sundarrajan, Nagesh, Srikanth and Sowcar Janaki.

Even as he worked at the Accountant General's office, Balachander was assigned the writing of dialogues for the film Dheiva Thaai (1964 ) by its hero, M G Ramachandran. This was followed by Avichi Meiyappa Chettiar acquiring the rights of his play Server Sundaram (1964), to convert it into a film. Directed by well-known director duo, Krishnan Panju, the film won several honours including Certificate of Merit for the third Best Feature Film in Tamil and the Filmfare Award for Best Tamil Film. Balachander made his directorial debut with Neerkumizhi (1965), based on a play he had written, featuring actors who were a part of his theatre troupe. He went on to direct a film based on another play he had written, Major Chandrakanth (1966). This National Award winning film was adapted into Hindi, as Oonche Log (1965). Other films he went on to direct include Naanal (1965) and Ethir Neechal (1968) based on his own plays, the full-length comedy family drama film Bama Vijayam (1967) which was a big hit and was remade in Telugu as well as Hindi as Teen Bahuraniyan (1968), and the Gemini Ganesan-starrer Iru Kodugal (1969) which won the National Film Award for Best Feature Film in Tamil.

The following decade saw a definite shift, as Balachander focused on realistic cinema, that centred around family and social issues. His controversial Arangetram (1973) was far ahead of its times, as it dealt with poverty and prostitution, telling the story of the eldest daughter of a conservative Brahmin household who enters prostitution in order to support her family. The film also featured Kamal Haasan in his first major role as an adult actor—he would go on to act in 35 films directed by Balachander. Later, Balachander also made his Hindi directorial debut with the remake of Arangetram, titled Aaina (1974) starring Mumtaz and Rajesh Khanna. Directing Sollathaan Ninaikkiren (1973), based on a novel by Manian, Balachander directed Naan Avanillai (1974) produced by and starring Gemini Ganesan, based on the Marathi play To Mee Navhech, about a man who deceives and marries five women. It was followed by Aval Oru Thodar Kathai (1974), another female-centric film which explored the emotions of a young woman who is the sole breadwinner of her middleclass family, inspired by the Bengali film Meghe Dhaka Tara (1960 ). With Mondru Moodichu (1976), he gave young Sridevi her first break as a heroine, also launching Rajnikanth with the film, who would go on to become a leading star. Revolving around a young girl and her two roommates who fall in love with her, the film revolves around an 18-year-old girl and two roommates who fall in love with her, the film won three National Film Awards including the award for the Best Feature Film in Tamil.

Balachander’s films with Kamal Haasan garnered considerable attention. His Manmadha Leelai (1976) explored the life of a womaniser, played by Haasan, and went on to achieve cult status, being considered a trendsetter in Tamil cinema. Another Haasan-starrer Anthuleni Katha (1976) also introduced Jaya Prada in her first starring role.

His women-centric films explored various interesting themes. If Avargal (1977) followed the life of a divorcée traversing relationships in reverse, 47 Natkal (1981) focused on the travails of a newlywed Indian woman living with her abusive expatriate husband in Paris, and Varumayin Niram Sigappu (1980) explored the difficulties of being unemployed in a harsh city.

Balachander took the Hindi film industry by storm with his Ek Duuje Ke Liye (1981), which saw Rati Agnihotri, Madhavi and S. P. Balasubrahmanyam making their Hindi film debut. A remake of his own Telugu film Maro Charitra (1978), the film was a major box-office as well as critical success, winning Balachander the Filmfare Award for Best Screenplay, as well as a Filmfare Award for lyricist Anand Bakshi and a National Film Award for singer Balasubrahmanyam.

He went on to direct Sindhu Bhairavi (1985), which explored the unlikely relationship between a Carnatic musician and his avid critic. In later years, he directed Parthale Paravasam (2001) and Poi (2006). For roughly a decade from the late 1980s till the late 1990s, Balachander forayed into television, making several TV series such as Kai Alavu Manasu, Rail Sneham, Ramani vs Ramani, Oru Koodai Paasam, Kadhal Pagadai, Premi, Jannal, Anni and Sahana. In 2009, he returned to theatre after a 40-year break with the play Pournami.

Married to Rajam in 1956, the couple had two sons Kailasam and Prasanna and a daughter Pushpa Kandaswamy.

K Balachander passed away on 23 December, 2014. He was cremated with full state honours.