“YAADGAR” is a story of a young man who left his footprints on the Sands of Time.

To escape the wrath of the gangsters who were pursuing her in the desert, a woman left her child in a stranger’s car. The stranger gave the child to Chand, a notorious assassin, to be returned to his mother. But the mother was never traced and the child Bhanu grew up as Chand’s adopted son. He was like a jewel in the mud; in surroundings of crime he grew up to be a young man of principles. Maharaja Rana Shamsher Singh returned to the State with his son Yuvraj Prem and his daughter, Rajkumari Savitir. The Rajkumari, accompanied by her friend Bhavna, niece of the alcoholic Bholanath, went to the Bazaar to distribute sweets and gifts to the poor to help in Maharaja’s election campaign.

Bhavna met Bhanu, now the leader of the ‘Pol Khol Mandli,’ a group of young men who exposed the evildoers with song and dance in public. Bhavna was enchanted with Bhanu’s ideals and it was the beginning of the romance between them.

Bhanu continued to win people’s hearts with his “Pol Khol Mandli” and their song “Ek Tara Bole” earned him the pet name of ‘tara master’, The mandli ‘welcomed Bhavna as their future ‘bhabhi’ but under a threat to Bhanu’s life, Bhavna agreed to marry Yuvraj Prem. The drama shifted to the desert once again; with the camel’s hoofs sounding a funeral dirge and the horses neighing as spears flew all over the forces of Good and Evil clashed again for the last time.

Did Bhanu discover his parents? what did the alcoholic Bholanath do to achieve the happiness of his niece? Did the Maharaja and his son succeed in destroying Bhanu in the desert? And whom did the ‘Pol Khol Mandli’ expose in the end?

“Yaadgar” is a New Wave movie of those few glorious moments in the lives of man and women in which man understands the true meaning of life-the moments that can never never be forgotten. 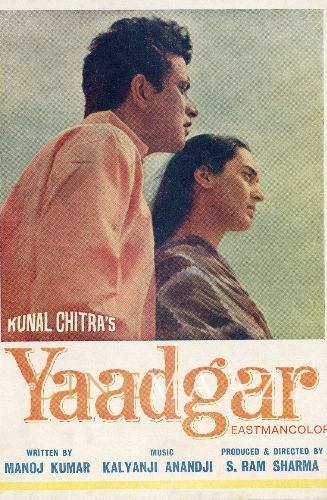