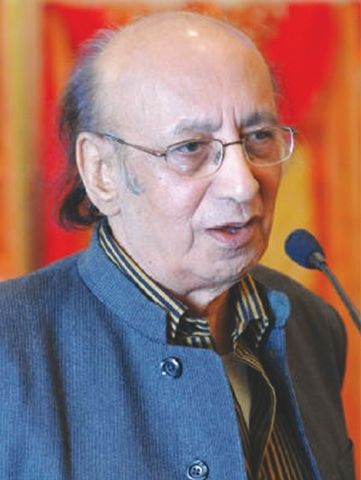 'Duniya jise kehte hain jaadu kaa khilona hai, Mil jaaye to mitti hai, kho jaaye to sona hai'… This popular couplet was penned by noted poet, lyricist, and dialogue writer Nida Fazli, who gave Urdu poetry a tone and style that was rarely considered by Urdu poets before him. He went on to write several songs for Hindi films such as Aa bhi jaa from Sur (2002), Tu is tarah se meri zindagi mein from Aap To Aise Na The (1980) and Hosh waalon ko khabar from Sarfarosh (1999). His poetic writings include a collection of sher-o-shayari Lafzon Ke Phool, a collection of character sketches titled Mulaqaten, Mor Naach which is a compilation of collected works, Aankh aur Khwab ke Darmiyan, Safar Mein Dhuup to Hogi, and more. Fazli was awarded the Padma Shri in 2013 for his contribution to literature. Acknowledged as one of the leading Urdu poets of his generation, as a lyricist he brought a certain standard of quality to the largely mediocre Hindi film songs of the 1980s. While his ghazals epitomised the alienation of the individual in uncaring cities, his love songs expressed the aspect of inner calm.

Son of an Urdu poet, he was born Muqtada Hasan Fazli on 12 October, 1938 in Delhi. Hailing from a Kashmiri family, he grew up in Gwalior, where he completed his school education as well as studied English literature. He was inspired to write poetry listening to a recitation by a bhajan singer in a temple of a Surdas composition about Radha sharing her sorrow with her maids at being separated from her beloved Krishna. His style of poetry was influenced by the essence of Mir and Ghalib, the lyrical mood of Meera and Kabir, as well as the craft of T S Eliot, Gogol and Anton Chekhov. He was thus inspired by the tradition of Bhakti poets as well as Sufi poets like Amir Khusro and Abdul Rahim Khan-E- Khana. He published his first collection of Urdu poetry in 1969. Revolving around nostalgia, his poetry mirrored contradictions in life, the search for purpose, shades of human relationships, differences between practice and preaching, and the groping for that which is lost.

Choosing to stay on in India, post-Independence, he disagreed with the Partition of India and went on to speak out against communal riots, politicians and fundamentalism. His pain and sense of loss, caused by his parents moving to Pakistan, was to impact him for the rest of his life. Nida Fazli moved to Bombay in search of a job in 1964. He initially wrote for the publications Dharmayug and Blitz. It wasn’t long before his poetic style attracted the notice of filmmakers and writers of Hindi and Urdu literature. Popular at poetry recitations, he also made a name among readers and ghazal singers for his presentation and usage of colloquial language for ghazals, dohaas and nazms. He was known to avoid flowery Persian imagery and compound words in his poetry. In the 60s, Fazli also penned critical essays of contemporary poets in his book Mulaqatein, which apparently did not please well-known writers such asAli Sardar Jafri, Sahir Ludhianvi, and Kaifi Azmi. He later explained that he had been fresh out of college at the time, with great dreams, and had found their communism paradoxical considering their lived comfortable lives even as they spoke about the worker and the farmer. “It seemed all preaching and no practice,” he explained his prejudice, after wisdom and maturity had set in.

The tide changed when he was approached by renowned filmmaker Kamal Amrohi to complete the music for his film Razia Sultan (1983)—the original songwriter Jan Nisar Akhtar had passed away before the project could be completed. Fazli’s two songs penned for the project, namely Tera hijr mera naseeb hai and Haryala banna aaya re, caught the attention of other Hindi filmmakers.

It took Fazli time and effort to reconcile to the demands of lyric writing. He considered it a mechanical exercise; a far cry from the creative sentiment and inner urge that is the hallmark of poetry. However, understanding the practicalities of the situation, he managed to strike a balance between the two. He penned lyrics for songs in films such as Aap To Aise Na The (1980), Red Rose (1980), Yash Chopra’s Nakhuda (1981), Harjaee (1981), Anokha Bandhan (1982), Vijay (1988), Is Raat Ki Subah Nahin (1996), Tamanna (1998), Sarfarosh (1999), Sur – The Melody of Life (2002), Dev (2004), and Yatra (2006). While his association with Mahesh Bhatt had given him the opportunity to write in Chaahat (1996)and Tamanna, it was Tanuja Chandra’s Sur – The Melody Of Life (2002), which earned him real fame, as all the film’s tracks became popular, including Aa bhi jaa and Kabhi shaam dhale.

He wrote the lyrics of well-appreciated songs such as Tu is tarah se meri zindagi mein, and Hosh waalon ko khabar kya. He also wrote dialogues for Dev (2004, co-writer), and Yatra (2006). Fazli also penned the title song of TV serials like Sailaab, Neem Ka Ped, Jaane Kya Baat Hui and Jyoti. Famous artists of the day such as Jagjit Singh and Kavita Krishnamoorthy have rendered his ghazals and other compositions. Collaborating with Jagjit Singh, the duo brought out an album titled Insight in 1994. It won appreciation for its meaningful poetry and music. Later in life, Fazli also penned columns for BBC Hindi’s website, writing on a range of contemporary issues as well as literature.

Some of Fazli’s poetry collections include Lafzun Ka Pul, Mor Naach, Aankh Aur Khawaab Ke Darmayan, Khoya Huwa Sa Kuch, Shehar Mere Sath Chal, Zindagi Ki Tarhap, Sab Ka Hai Maahtaab, Duniya Jise Kehte Hain, and Shehar Mein Gavaun (Kuliyaat). His prose collections comprise Mulaqatein, parts 1 and 2 of his autobiography Deewaron Ke Beech, Chehre, and Dunya Mere Aage. Penning 24 books, some of his works were assigned as school textbooks in Maharashtra, while some are present in the National Council of Educational Research and Training Hindi textbooks which are studied by students. Honoured with the National Harmony Award for writing on communal harmony, he also received the Mir Taqi Mir award from the government of Madhya Pradesh for his autobiographical novel, Deewaron Ke Bich. Other awards he won include the Sahitya Akademi Award in Urdu for his poetry collection Khoya Hua Sa Kuchh, the Star Screen Award for Best Lyricist for Sur, and the fourth-highest civilian award by the Government of India—the Padma Shri in 2013.