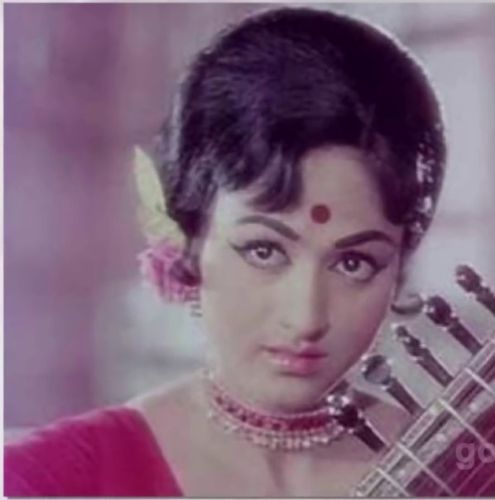 A prominent actress of the Kannada film industry, Bharathi Vishnuvardhan was born on 15th August 1950 in Vani Vilas Hospital in Bangalore to V M Ramachandra Rao and Bhadravathi Bai.  In her school years, she studied in Bharathi Vidya Shabha, Malleswara, Government School and M L A School. She was enrolled in Maharani’s Women’s Science College in Bangalore. Active in co-curricular activities, she was trained in Carnatic music and dance. Apart from it, she was active in the sports field as well, even representing Karnataka at state-level competitions in throw-ball. Bharathi never imagined pursuing a career in the film industry but her parents always encouraged her after they saw her perform on stage in school.

On an occasion during college, she performed a dance number with her friend Radha. The images of that performance were clipped on a noticeboard which found its way into the hands of Kalyan Kumar. In December of 1964, he scouted her to feature in his next film Love in Bangalore (1966) which was her film debut. Although it was B R Panthulu’s Dudde Doddappa that was released earlier than Love in Bangalore in the same year. In her long career, she collaborated with Panthullu in several projects namely, Emme Thammanna (1966), Nadodi (1966), Enga Pappa (1966), Namma Veettu Lakshmi (1966), Gange Gowri (1967), Amma (1968), Gandondu Hennaru (1969), Aliya Geleya (1970), and Sri Krishnadevaraya (1970).

Rajkumar and her pairing was widely appreciated by the audience since their first pairing in Sandhya Raga in (1965). His modest personality matched with hers and the receptive audience encouraged the producers to cast the two as leads in over 20 films. To name a few of their films, Manassakshi(1968), Sri Krishnadevaraya, Bangarada Manushya (1972), Jaga Mecchida Maga (1972), Gange Gowri and Baalu Belagithu (1970). Her pairing with later husband Vishnuvardhan was also quite successful, giving hits such as Bhagya Jyothi (1975), Devara Gudi (1975), Nagarahole (1977) and Bangarada Jinke (1980).

She has played many acclaimed roles in her career. Her performance in Sri Krishnadevaraya won her the Karnataka State Film Award for Best Actress. Her role in Runamukthalu(1984) also won her great acclaim. Runamukthalu signalled the beginning of the second phase of her career, starring in films like Maneye Manthralaya (1986), Shanthi Nivasa(1988), Bandha Muktha(1987), Thaliya Aane (1987) and Matsara(1990).

She has also occasionally dabbled in singing. For the film, Snehithi she sang a duet with T M Soundarrajan called Thanganilave nee illamal. She also sang a song with her husband for Nagarahole called Ee Notake Mai Matake. She was also associate director with K S L Swamy KaruneIllada Kanoonu (1983), Huli Hejje (1984) and Malaya Marutha (1986).

Bharathi met her husband Vishnuvardhan while shooting for Doorada Betta on the occasion of 100th-day celebration of Nagarahavu. When they acted in Mane Belagida Sose (1973) together, their love and relationship grew. The two got married on 27 February 1975. They had two daughters Keerthi and Chandana. Vishnuvardhan was a doting father to his girls but was also strict when required. He passed away on December 2009.

In her long career, she has transitioned from celluloid to digital films, an exciting change and challenge that the actress explored. She runs the Vibha Charitable Trust and is actively involved in Snehaloka cricket and karaoke clubs.