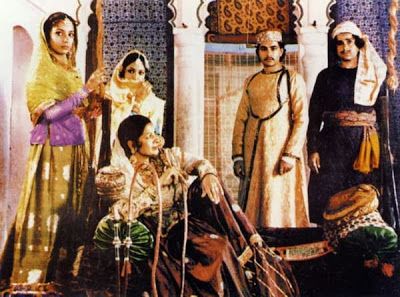 Junoon (1978) is a serious historical film with a major budget backed by a box-office star of the Bombay cinema. The collaboration between the commercial industry and an innovative director is already interesting; what makes Junoon a test case is its combination of spectacle with analysis. If it succeeds with audiences, it will bring money and taste closer than they have managed to come in several decades of Hindi cinema.

The historical film is certainly not a genre new to Indian cinema, but clearly Junoon’s kind of historical film is. Traditionally, historical films in India have emphasized lavish sets, a sky full of stars, numerous songs and dances. In sum: kitsch, for which the Hindi film is infamous. If Junoon is a commercial success, Hindi film barons will have to think again about the reliability of their old formulae.

True, Benegal's Junoon has its quota of stars (Shashi Kapoor and Shabana Azmi). But it is a coherent, personal film.

Against the turbulent background of the Indian Sepoy Mutiny of 1857, Benegal's Junoon tells the story of a noble savage's obsession (in this case, a Pathan) with an adolescent English girl.
Within this narrative are Benegal's oblique comments on the society of the time, its harshness and the gulf between the two cultures.
In a small (unnamed) town in North India lives a Pathan, Javed Khan (Shashi Kapoor), with his childless wife (Shabana Azmi). In the English cantonment lives Ruth Labadoor (Nafisa Ali), a young girt whom he has seen from a distance and dreams of. Ruth lives with her civil servant father (Tom Alter) and Anglo-Indian mother (Jennifer Kendal). Javed Khan's in-law, Sarfaraz (Naseeruddin Shah), leads a band of rebels against the British and massacres the congregation at Church on a Sunday morning.

Everyone except Ruth, her mother, and grandmother, are killed. When he hears of this, Javed Khan hunts for Ruth. He discovers that a Hindu money lender (cleverly played by Kulbhushan Kharbanda) has hidden the women in his house. Taking them away from there, Javed Khan installs the firangees' in his own home, much against the wishes of his wife. The wife is even more upset when she learns of her husband's desire to take the English girl as his second wife. The girl's mother too is against the marriage and, with the help of Javed Khan's aunt (Sushma Seth), extracts a promise from Javed Khan that he will marry Ruth only if the sepoys take Delhi.

Meanwhile, Sarfaraz brings home news of the war and is shocked at his brother's disinterest in the fighting. Delhi is lost, he says, to the horror of Javed Khan and the relief of Mrs. Labadaor. Javed Khan keeps his word and leaves the girl Ruth alone. It is only when his cousin dies in a skirmish with the British that Javed decides to fight along with the sepoys. In a major battle, Sarfaraz is killed and the sepoys routed. News of brutal retribution by the British spreads among towns; the people flee. Javed Khan finds that his town is deserted and rides out with the exodus. All he wants to know is where the firangees' are. When he hears that they have stayed back, waiting for the British forces, he returns and finds them in Church. The mother refuses to allow him to see the girl. As he turns away despondently, Ruth comes out, calling his name. He keeps his promise to her mother. He leaves Ruth behind, looking after him as he rides away. A caption tells us that Javed Khan was killed in battle soon after. The girl died in England 55 years later, still unwed.

Within this narrative are Benegal's oblique comments on the society of the time, its harshness and the gulf between the two cultures. Govind Nihalani's photography brings to Junoon the professional lushness he has given all of Benegal's films. The music by Vanraj Bhatia with an emphasis on strings seems strangely inept at times and simple and elegant at others.

By focussing on the human story of one Pathan and one English girl, he has made the complex background of colonial conflict intelligible.
The single most vivid character in the film is Mrs Labadoor as played by Jennifer Kendall. Through her the hundreds of Mrs Labadoors, the Memsahibs who helped build the Raj with their destination to survive in an alien environment, become credible. It is a shame that this very fine actress is so rarely seen on the screen. Shabana Azmi and Naseeruddin Shah, despite their brief roles, prove yet again that they are gifted actors; their performances are a pleasure to watch. Shashi Kapoor's Pathan is a professional blend of the roughness and sensitivity the role requires.

Unhappily, Tom Alter's civil servant is most unsuited to this talented company. Nafisa Ali, much publicised by the gossip magazines as Benegal's new find, is very beautiful. She has a ravishing smile, but her role calls for too much screaming and crying and not much subtlety.

Incidentally, apart from playing Javed Khan, Kapoor is also the producer of Junoon. One must be grateful that he has made this important Benegal film possible. For the director has made Junoon into more than just a genre film. By focussing on the human story of one Pathan and one English girl, he has made the complex background of colonial conflict intelligible.

This article was originally published in Indian Cinema 1990-94. Images used in the feature are taken from the internet.
410 views