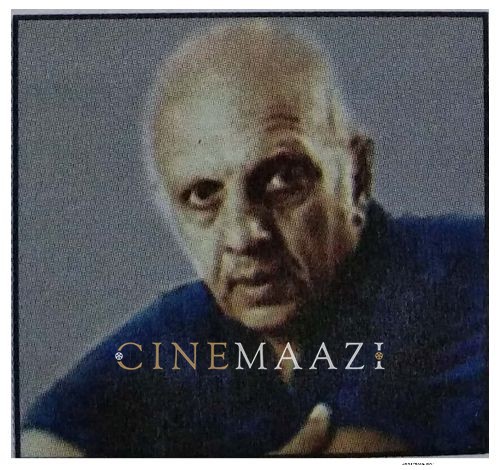 Celebrated music composer Vanraj Bhatia, trained in Western classical music and equally conversant in Indian traditions, carved a career that spanned cinema, advertising, television and the stage. Composing over 7,000 advertising jingles, including memorable ones for Liril and Dulux, he also created the scores of many Indian arthouse films, as well as television shows. His work in films was seen as a testimony to his versatility and technique. He scored the music for several Shyam Benegal films including Bhumika (1977) and Sardari Begum (1996). While he scored the music for 36 Chowringhee Lane (1981), Jaane Bhi Do Yaaro! (1983), Tarang (1984), Pestonjee (1987), Percy (1989), Droh Kaal (1994), Bangarwadi (1995), Naseem (1995) and Jaya Ganga (1996), he is also credited with composing the background score of films such as Ajooba (1991), Beta (1992), Damini (1993), Ghatak (1996), Pardes (1997), Chameli (2004) and Rules: Pyar Ka Superhit Formula (2003). Creating the opening tunes for popular TV serials such as Khandan, Tamas, Wagle Ki Duniya, Naqab, Lifeline and Banegi Apni Baat, Benegal’s Bharat Ek Khoj contained some of his finest compositions. His studies and the resultant scholarships and awards gave him a deeper exposure to Western musical thought than perhaps any other Indian composer. Winning a National Film Award for Govind Nihalani’s Tamas, Bhatia was also awarded the Sangeet Natak Akademi for Creative and Experimental Music in 1989, and a Padma Shri in 2012.

Born on 31 May, 1927 into a family of Kutchi businessmen, Bhatia schooled at New Era School in Bombay. Learning Hindustani classical music as a student at Deodhar School of Music, as a teenager his interest in Western classical music was sparked after hearing Tchaikovsky's Piano Concerto No. 1. He went on to learn the piano with Dr Manek Bhagat for four years. Earning his MA (English Honours) from Elphinstone College, University of Bombay in 1949, he took his musical education forward receiving the Sir Michael Costa Scholarship. He thus studied composition with Howard Ferguson, Alan Bush and William Alwyn at the Royal Academy of Music between 1951 and 1954. Graduating with a gold medal, he went on to win two more scholarships—the Rockefeller Scholarship (1954–58) and the French Government Scholarship (1957–58) which allowed him to study with Nadia Boulanger at the Conservatoire de Paris for five years.

Returning to India in 1959, he worked as a Reader in Western musicology at the University of Delhi alongside creating advertising jingles, starting with the advertisement for Shakti Silk Sarees, Liril, Garden Vareli and Dulux. He composed the background score for his first Shyam Benegal film, Ankur in 1972. Sixteen more followed, up until Hari-Bhari (2000).

Perhaps the best-known composer of Western classical music in India, Vanraj Bhatia’s most frequently performed works are the Fantasia and Fugue in C for piano, the Sinfonia Concertante for strings, and the song cycle Six Seasons. While his Reverie was performed by Yo-Yo Ma at a concert in Mumbai in 2019, the first two acts of his opera Agni Varsha, based on Girish Karnad's play of the same name, premiered in New York City in 2012 in a production by Judith Kellock.

Interestingly, Bhatia was dissatisfied with the way his music was used in the parallel cinema of the 70s and 80s. He felt that music had always been an integral part of Hindi cinema, but the New Wave directors didn't know how to weave it into their films. They would invariably have Bhatia’s compositions playing in the background, thus diluting the music’s impact on the audience. Pointing out that Indian cinema was a direct descendant of Sanskrit theatre and Parsi theatre, both of which had songs, he believed that an Indian film without songs was meaningless. With mainstream filmmakers not drawn to Bhatia, his main work remained with New Wave directors, with the exception of a few films in the 90s. He himself admired the treatment by Raj Kapoor and Guru Dutt of music in their films. Among New Wave directors, he rated highly Kumar Shahani and Saeed Mirza, with whom he had worked with in Tarang (1984) and Naseem (1995) respectively.

In the realm of film music, Bhatia loved the music from the New Theatre studios in Calcutta—R C Boral, Pankaj Mullick, and all the K L Saigal films. These soundtracks had considerable influence on his music. He learnt how to set a voice against an orchestra from listening to their music. He believed Boral, in particular, had a very good sense of orchestration, which explains why the music was so good. Vanraj Bhatia believed the first duty of music is to express the film's texture, and the second is to be able to stand on its own feet. It was about speaking the language as everybody else—but infinitely better.

Vanraj Bhatia passed away on 7 May, 2021 in Mumbai