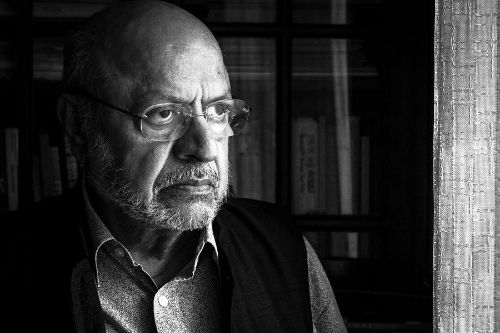 Regarded as one of the most important figures of Indian Parallel Cinema, Shyam Benegal occupies a seat of honour in the pantheon of the most accomplished filmmakers of all time. Coming off the heels of films like Bhuvan Shome, Uski Roti and Sara Akash (all 1969), it was Benegal’s Ankur (1973) that announced that an alternative cinema had truly arrived. Often considered as a bridge between the earlier realism of Satyajit Ray and the political commitment of filmmakers like Mrinal Sen, Benegal’s films combined narrative solidity with an empathy towards the marginalised. While he later dabbled in an aesthetic closer to ‘middle cinema’, his early films like Ankur, Nishant (1975), and Manthan (1976) established the template for later filmmakers like Govind Nihalani to follow.

Shyam Benegal was born on 14 December, 1934 in Trimulgherry, Hyderabad State. His father Sridhar B Benegal was a photographer. It was with his father’s camera that a 12-year-old Benegal would make his first film. He later went on to become an Economics graduate from Osmania University. While in college he became involved in theatre and also founded the Hyderabad Film Society. In 1959 he shifted to Bombay and worked as a copywriter for Lintas Advertising. In 1963 he joined the Advertising & Sales Promotion Company. Between 1963 and 1973, he was a prolific maker of advertising films, corporate films and documentaries. His documentary A Child of The Streets (1967) brought him some renown. He also taught at the Film and Television Institute of India, Pune between 1967 and 1973 and also at Bhavan’s College. He was the recipient of the Homi Bhabha Fellowship in 1969, which led him to move to UK and then to the USA. He worked as an associate producer for Boston WBGH TV and later with the Children’s Television Workshop in New York. Upon his return to India, he managed to find funding for his directorial debut Ankur, the script for which had been written 10 years prior.

Ankur was an unexpected success, boasting of a powerful performance from a debuting Shabana Azmi. Combining realism with elements of melodrama, Benegal moved away from the radical experimentation espoused by other New Wave filmmakers like Kumar Shahani and Mani Kaul, but managed to find wider acceptance among audiences. The film’s last shot (of a young boy throwing a stone through the window of the zamindar) has become emblematic of the New Indian Cinema movement. Mohan Bijlani had earlier made advertising films with Benegal and the project took off once he came on board as producer. The film won the National Award for Second Best Feature Film.

His next film Nishant (1975) marked the debut of two of India’s greatest actors – Naseeruddin Shah and Amrish Puri. The film was adapted from a Vijay Tendulkar play and focused on the theme of rural exploitation in Andhra Pradesh. He also adapted Habib Tanvir’s Chattisgarhi play Charandas Chor in a film of the same name which was Smita Patil’s film debut. He cast many of the children he met while he was making 21 film modules for Satellite Instructional Television Experiment, funded by the UNICEF. Manthan (1976) was financed by the National Dairy Development Board in a possible bid to improve the body’s image as it was mired in controversies at the time. The film depicted the early years of struggle when the co-operative had to fend off corrupt government officials and politicians to survive. The film was a commercial success due to the interest from the farming community who deemed it as their film. It won the National Award for Best Feature Film in Hindi.

Bhumika (1977), based on Marathi and Hindi actress Hansa Wadkar’s autobiography, featured Smita Patil in one of her career-defining performances. With numerous allusions to film personalities like Govindrao Tembe and Devika Rani, the film depicts the story of a flamboyant woman trapped in the patriarchal moorings of society. The film won the Filmfare Award for Best Film. The same year he also made Kondura (1977) which remains his only film in the language of Northern Andhra Pradesh.

Junoon(1979) was a departure from the themes of rural oppression Benegal had established in his previous films. Featuring the Sepoy Mutiny of 1857 as the backdrop, the film has a complex love story at its heart. It was Shashi Kapoor’s debut as a producer, and the two would go on to collaborate again in Kalyug (1980) which transposed the Mahabharata to modern times. Both Junoon and Kalyug won the Filmfare Award for Best Film.

Aarohan (1982) was produced by the Government of West Bengal to promote their land reform programme Operation Barga. In Mandi (1983) Benegal ventured into comedy for the first time, basing the film on a memorable Urdu short story Aanandi by Ghulam Abbas. Trikaal (1985) was set in Goa under Portuguese colonial rule and featured songs written by the famous Goan singer Remo Fernandes. Benegal also helmed the seminal television series Bharat Ek Khoj (1988) which sought to explore the rich culture and history of the country.

Benegal would continue making films well into the 2000s including Suraj Ka Satvan Ghoda (1992), Mammo (1994), Sardari Begum (1996), The Making of the Mahatma (1996), Samar (1999), Hari-Bhari (2000), Zubeidaa (2001), Netaji Subhash Chandra Bose: The Forgotten Hero (2005), Welcome To Sajjanpur (2008) and Well Done Abba (2010). He would also make a documentary on one of his most vocal afficionados -Satyajit Ray in 1985. Zubeidaa was his only foray into the mainstream Hindi form, featuring popular music by A R Rahman. He enjoyed a late-career hit with the satirical Welcome To Sajjanpur. Suraj Ka Satvan Ghoda, Mammo, Sardari Begum and Samar were critically acclaimed and won National Awards.

Benegal has been an important figure in national bodies which determined film policies. He has also presided over the Federation of Film Societies of India. Unlike other parallel cinema directors, his films have enjoyed more backing from state bodies. Despite his allegiance to alternative forms of cinema, some critics have found a more conventional strain in his cinema which have made them more acceptable to mainstream audiences as well as in the eyes of the state. He was awarded the Padma Shri in 1976 and the Padma Bhushan in 1991.