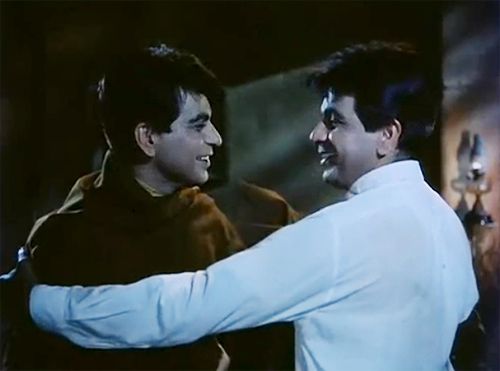 Ever since film stars came on the scene, every producer has been obsessed with the problem: how to get two stars for the price of one. The Hindi Cinema has evolved its own unique and simple solution: create a double role for the star. Thus, since the days of Nishan (1949), the Hindi screen has proliferated with identical twins and triplets stumbling over each other. Just like the family social (Madras formula), the spy film a-la James Bond and the "ghost song" thriller, the popularity of the double role film can also be attributed to a trend set in motion by one or two box-office bonanzas incorporating double roles.

Unfortunately, despite the large number of Hindi films employing the device, it speaks ill of the creativity of Hindi filmmakers that the treatment in the majority of double role films is very stereotyped. The standard script usually separates the twins in childhood by force of circumstances. Grown up, one of them is painted black and the other lily-white in character. This, of course, is to facilitate the star in easily emoting the two roles without getting them mixed up. It further serves to introduce the eternal conflict between good and evil the backbone of any Hindi film. Often, the producer saves the cost of a villain, with this setup.

To this standard genre belong films like Haseena Maan Jayegi (1968) (Shashi Kapoor) and Bhai Bhai (1970) (Sunil Dutt). Actresses too have had their share of double trouble, as witnessed in Anhonee (1952) (Nargis) and Baat Ek Raat Ki (1962) (Waheeda Rehman). Even the moppet has not been spared the experience (Baby Sonia in Do Kaliyan (1968)). Comedians have had prolonged digs at it Mehmood in Dil Tera Diwana (1962) and I. S. Johar in Johny Mera Naam (1970). The only important filmic character not "doubled" as yet is the villain, perhaps because we have a surfeit of character actors to play villains.

Occasionally, scriptwriters have been at such a loss to create situations of conflict that, leave alone being two sides of the same coin, the double role turns out to be viewing the same side of the same coin twice. This, of course, becomes very trying for the viewer, for it is agonising enough to see an actor ham it up in one role, but to see him hamming in two roles in the same film is the outside of enough. In this connection, one painfully recalls the terrible boredom generated by the films Jigri Dost (1969) (Jeetendra) and Izzat (1968) (Dharmendra). WONDERFUL DEVICE

It is a pity that the exciting possibilities of the double role have remained, by and large, unexploited. The pedantic direction and pedestrian scripting of such films are mainly at fault. The emphasis seems to be more on technical virtuosity, such as showing the doubles shaking hands, or embracing, or arguing with each other face to face.

But the possibilities of utilising the double role in enhancing the story value have remained unexplored. It is, for example, a wonderful device to increase the puzzle of a mystery. An attempt was made in this direction with Waheeda Rehman in Baat Ek Raat Ki, but the script could not keep up the pressure on the mystery for long.

It is in the field of comedy that the double role offers great scope especially to create a merry mix-up. One recalls with a chuckle the hilarious situational comedy, On the Double, in which Danny Kaye excelled. Some of our films have made a good mark in the comedy line of double role, but again, the success has been due more to the calibre of the actor than any inventiveness of the script.

Mehmood in Dil Tera Diwana was quite delightful, especially so as the rickshawallah. I. S. Johar's attempt in Johny Mera Naam provoked laughter more because of the witty, tongue-in-cheek dialogue than because of the nature of the double role itself. Towering above them all is Dilip Kumar's triumph Ram Aur Shyam (1967) in which the maestro carried the whole film on his shoulders by his consummate artistry in remarkably delineating the two characters.

Only two Hindi films have been made so far in which the scripts have been composed of funny situations arising from the presence of like-faced characters. Both of them were flops due to very poor production values and loose direction, which allowed the comedy to slip into slapstick. Do Dooni Chaar (1968), starring Kishore Kumar, incorporated two like-faced masters and two like-faced servants. It failed to click at the box-office because of its shoddiness, although the original Bengali version, starring Uttam Kumar and Bhanu Banerjee, was a success. Gustakhi Maaf (1969), with ebullient and sprightly Tanuja essaying the double role, suffered from a poor script, shoddy photography and desutory editing.

Besides the genuine double role, the Hindi Cinema is also enamoured of the pseudo double role, in which the same actor portrays two different characters who never come across each other on the screen. An early film of this type was Shararat (1959), wherein Kishore Kumar dies in the first half and is resurrected as another character in the second half. The picture was not a success because of its insipidity. A much better enacted and very successful film of this genre was the recent Rajesh Khanna starrer, Aradhana (1969). While the film had excellent music and a heart warming performance by Sharmila Tagore as attractions, there is no doubt that its mainstay was the superb performance by Rajesh as father and son. It was a difficult double role, for he had to present a youthful, romantic image in both roles and yet differentiate them. That he effectively succeeded in doing so, by merely varying certain mannerisms of speech and diction, between the two characters, is a measure of his histrionic capabilities.
QUITE FLUID

Zahida's pseudo double role in Anokhi Raat (1968) was another good performance. Her task was made slightly easier, in that she had to play a shy rustic belle in the first half and a sophisticated intellectual in the second half. Where Zahida succeeded, beyond the basic requirements, was in maintaining her intelligent poise in the second role and yet emoting in such a manner as to remind the audience of the village belle.

Technically, in mask shots, camera set-ups, editing, etc., the Hindi Cinema has become quite fluent in handling double roles. But the creative use of the double role as a dramatic device is still to be achieved.

This article was originally published Star & Style's 16 April 1971. The images in the feature are taken from the internet and Cinemaazi archive.
538 views