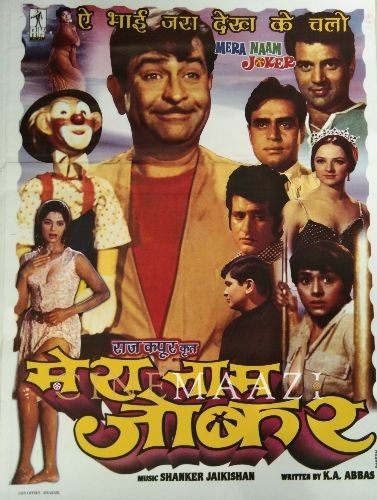 'Cults become cults, they are not made. It's the becoming that is interesting, not the making.'

There are some films that sure fizzle out of the theatres in a heartbeat, but figure out a way to survive. Through a torrent leaked online, on an old bootlegged DVD or VHS, or YouTube upload, and then in the hands of the omnipresent Twitterati—the films form a 'cult' of their own.

Amborish Roychowdhury gives an ode to these cult favourites in the book In A Cult of their Own: Bollywood Beyond Box Office. He draws upon his own experiences of watching them as well as interviews conducted with personalities such as Aamir Khan, Pankaj Kapur and Deepti Naval to celebrate these gems of Indian cinema.

In this excerpt, we find the delightful story of how a young Rishi Kapoor came to act in his father's Mera Naam Joker.

Few films till the 1970s - such as Kitaab (1977) and Mera Naam Joker - had captured adolescence in all its idiosyncrasies. Although the growing pains of an adolescent are not exactly what the film largely concerns itself with, Mera Naam Joker goes into territories no one had ever explored before. Like a teenage boy's obsession with his gorgeous teacher, his raging hormones and certain nightly indulgences adolescents commonly engage in. Rishi Kapoor mentioned on several occasions how he was over the moon when his father asked his mother whether he could borrow little Chintu (his nickname) for an acting job. Without further delay, the boy locked himself up in his room and got busy practising autographs. Although it was hardly his first on-screen appearance (as is well-known, Rishi Kapoor was one of the three little children scooting along wearing raincoats in the song 'Pyaar Hua Ikraar Hua' from Shree 420) , this was the first time he was playing a significant part, and hogging significant screen time. The chubby little blue-eyed boy that he was, Rishi was already winning hearts - his face stared from magazine covers, long before the film was released. As for his performance it was self-assured enough for one to wonder if it could really have been his first acting role. He was spot on as the adorable little bundle of mush in love with the much older Mary (Simi Garewal), and his performance won him the Bengal Film Journalists' Association (BFJA) Special Award. Amusingly enough, a younger Rishi (seemingly) falling for an older Simi was repeated again, exactly ten years later. The film was Subhash Ghai's Karz (1980).

Raju (Rishi Kapoor) has a major crush on his teacher Mary (Simi Garewal), but it really starts to disturb him when he spots her changing behind the bushes while on a school picnic. Consumed with regret, he confesses before God. Mary is also his confidante and he shares his dreams of becoming a clown with her - a joker who is destined to make people laugh. He looks at a Jesus Christ statue and wonders why he never smiles. Mary explains that it is because Christ is burdened by the sins of all humanity. Raju resolves to make Him smile. Soon enough, Mary's fiance David (Manoj Kumar) swwops in and walks away with her, leaving little Raju with a broken heart, for the first time. This excerpt is from In A Cult of their Own: Bollywood Beyond Box Office by Amborish Roychoudhury published by Rupa Publications.

The banner image did not appear with the original publication.

Amborish Roychoudhury is an advertising professional by day and movie maniac by night. He's been trying his hand at writing about movies, and blogs at amborish.com. This is his first book.
He lives in Mumbai, India.

Other Articles by Amborish Roychoudhury