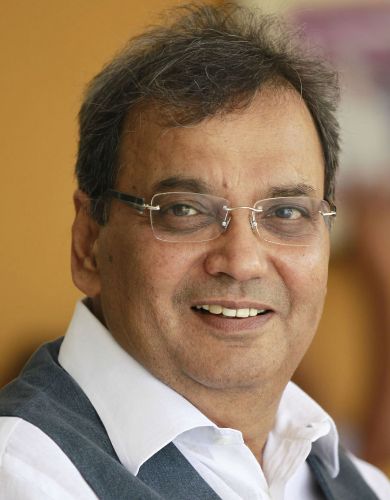 Known for his brief cameos in his directorial ventures—à la Alfred Hitchcock—director, producer and screenwriter, Subhash Ghai has myriad successful films to his credit. Dubbed the Showman of Hindi films by the media, he followed in the wake of the original Showman Raj Kapoor, who was legendary for his big musical films and grand celebrations. He was one of the top producer-directors of 80’s Hindi cinema. Ghai’s repertoire of hits includes Kalicharan (1976), Maeri (1976), Vishwanath (1978), Karz (1980), Vidhaata (1982), Hero (1983), Meri Jung (1985), Karma (1986), Ram Lakhan (1989), Saudagar (1991), Khalnayak (1993), Pardes (1997), and Taal (1999). Founder of Mukta Arts Private Limited in 1982 which went public in 2000, Ghai has also established the Whistling Woods International film and media institution in Mumbai. Recipient of the IIFA Award for outstanding contribution to Indian cinema, he has also received the National Film Award for Best Film on Other Social Issues for Iqbal (2005), the Filmfare award for Best Director for Saudagar, Filmfare Award for Best Screenplay for Pardes, and the IIFA Award for outstanding contribution to Indian Cinema, among other awards.

Born 24 January, 1945 in Nagpur, Ghai graduated in Commerce from Rohtak, Haryana, before he went on to graduate in Cinema from the Film and Television Institute of India, Pune. He started his career in Hindi cinema as an actor in Taqdeer (1967) and Aradhana (1969). Films such as Umang (1971), Bharat Ke Shaheed (1972), Sherni (1973), and Gumraah (1973) with Reena Roy and Danny saw him playing the male lead. Turning film writer in 1973, he would trade his stories and scripts with leading directors like Prakash Mehra and Dulal Guha in partnership with B Bhalla. His directorial debut came with Kalicharan which was written by him and starred Shatrughan Sinha and Reena Roy. The film became a blockbuster. He went on to direct three films -Vishwanath, Gautam Govinda (1977) and Krodhi (1979), before turning film producer with his musical classic Karz (1980). A thriller about a murderous wife from a past life, starring Rishi Kapoor, Simi Garewal and Tina Munim, the film was a roaring success. Ghai went on to direct the hit action drama Vidhata (1982), his first film with Dilip Kumar and Sanjay Dutt. He then formed his own company Mukta Arts Pvt Ltd. Under the Mukta banner he made several musical blockbusters such as Hero, which introduced Jackie Shroff, followed by hits such as Meri Jung, Karma, Ram Lakhan, Saudagar, Khalnayak, Pardes, Taal, and Yaadein (2001). Khalnayak invited some controversy for the provocative nature of the song Choli ke peeche. He also produced Mukul Anand’s last film Trimurti (1995). In more recent times, he made Kisna (2004), Black and White and Yuvraaj (2008), also producing Aitraaz (2004), 36 China Town (2006), Apna Sapna Money Money (2006), Joggers Park (2003) and the much-acclaimed Iqbal. Besides Hindi cinema, Ghai also produced regional films like Nauka Dubi (2011) in Bengali, Shehnai Chogde and Samhita (2013) in Marathi and Double Di Trouble (2014) in Punjabi.

Ghai’s contributions to the film industry are wide-ranging. While both Pardes and Taal were released internationally, the films also featured in the top 20 movies in the US box office charts for several weeks. He introduced a film insurance policy in the Hindi film industry for the first time with his film production, Taal. He was also the first to initiate banks to finance films. His company, Mukta Arts Limited came out with a public issue in the year 2000, becoming the first company from the Mumbai film industry to go corporate in 2001. He expanded the business of Mukta Arts Pvt Ltd to include film exhibition and multi-media. Promoting new technology in production and exhibition sectors, he also promoted new talent, grooming and launching new faces such as Madhuri Dixit, Manisha Koirala, Jackie Shroff, Sanjay Dutt, Mahima Chowdhary, and Aishwarya Rai. He is also known for extracting great music from various composers and acting performances from the actors he worked with. Ghai also set up an international film school, Whistling Woods International in Mumbai, the campus attracts national and international students also exporting education to countries like UK and Nigeria.

Winner of several national and international awards, Subhash Ghai has also been honoured by the United States senate. Former chairman of the entertainment committee of trade body CII and a member of FICCI, NASSCOM and TIE global and its alliances, he has also served on the jury of Emmy awards for three years and on the international panel on film piracy at Cannes film festival in 2008.