The Menace of Devaki Bose 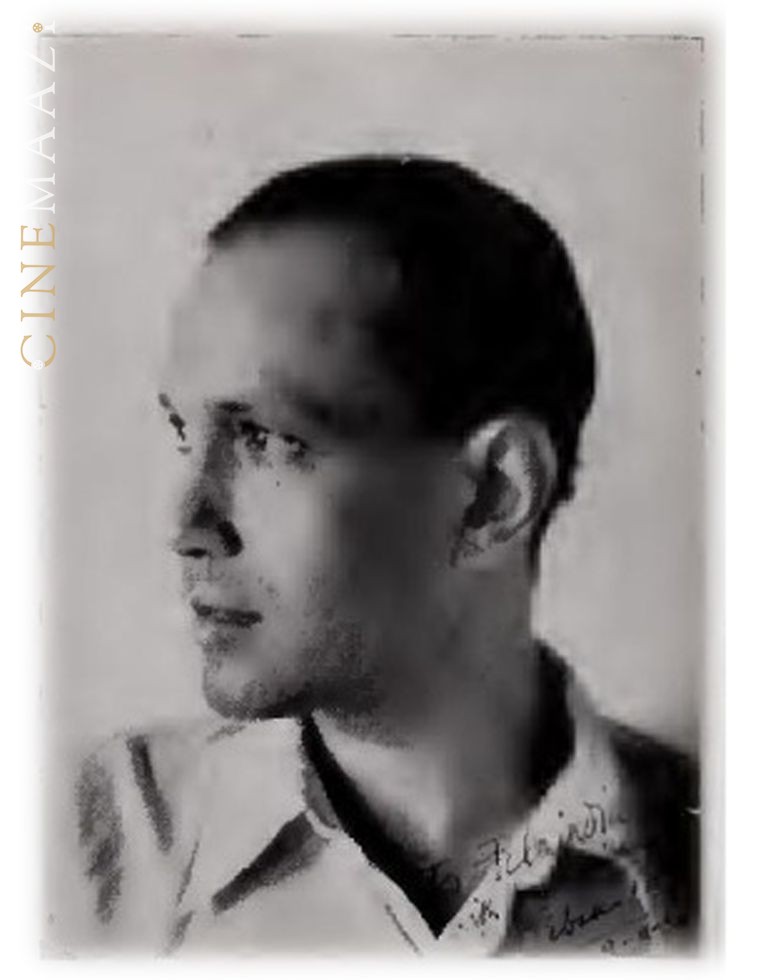 "Call it mysticim, Call It Inspired Poetry, I Call It Hocus-Pocus!"

Devaki Bose is not a film director. He is a tradition. He is a legend. He is a menace. He is a menace all the more because he is a genius. Indeed, he is worse than that. He is a poet.

I have told the truth and nothing but the truth. So help me God.

Devaki Bose is not a film director. He is a tradition. He is a legend. He is a menace. He is a menace all the more because he is a genius. Indeed, he is worse than that. He is a poet.
From Kumbakonam to Kashmir, from Karachi to Rangoon, I can visualize thousands of young men and. of course, young women, too! - gnashing their teeth as they read the above lines. If only they could lay their hands on me they would like to tear me to pieces.

FROM "SHADOWS OF DEATH" TO -

The first film that Devaki Bose directed was called "Shadows of Death". It has haunted him ever since.

PAST MASTER IN THE PAST

The secret of Devaki Bose's success thus lies not in his directorial competence or the technical quality of his picture but in the popular acceptance of the pseudo-mystical and romanticist melodramas he caters to the public. You don't believe it, of course! Then, why is it, that Devaki Bose is remembered for his "Puran Bhakt", "Seeta" and "Raj Rani Meera", and not for a longer list of flops like "After The Earthquake", "Life Is A Stage", "Sonehra Sansar" and "Sapera"? Think about it and see if you arrive at the same conclusion as I have.

The trouble is that the Devaki Bose cult is so fanatical that he has come to assume an almost religious and sacrosanct position. Thus very few of them will be able to dispassionately study and analyse the work of their favourite director. The dozens of letters that came to me and the hundreds that came to the Editor of "Filmindia" after the publication of my last article on "The Only Three Great Directors of India!" are fully representative of this widespread sect.

Among these piles of abusive epistles, angry denunciations and indignant protests, there was one suggestion, the unconscious humour of which struck me as rather too cute. I was asked to write an article on "Devaki Kumar Bose Made Easy." Yes, he does need a lot of explaining to be intelligible to the plain and simple folks!

WHAT I THINK OF HIM

If Devaki Bose fails, it is by his own standards. I would not waste my time and the pages of "Filmindia" on a third rate director. If I deplore his present stagnation it is because of what he might have been, if only he had cared to study and follow the progressive trends in filmcraft instead of continuing to exploit the reputation he had once made for himself.

Let me give but one example of the antiquated notions of dramatic construction still followed by Devaki Bose. Even the greatest admirer of Devaki Bose will admit that comedy is his weak point, that every time he wants to put a humorous situation in his picture it degenerates into the crudest banal episode. But more important to watch, is how like the old stage playwrights, Devaki Bose clumsily introduces the comedy element in his pictures, something brought in from without instead of it being inherent and arising from within the theme pattern. A gem of a picture like "Seeta" was vulgarized at places by the presence of the two slapstick comedians, Mota and Dubla.

This Laurel-Hardy type of clowns reappeared in "Life Is A Stage" as "Fat Tummy" and "Thin Leg" (both specifically mentioned as "Comedians" in the cast!) and, finally, we saw them in "Vidyapati" as Vidushak (Nemo) and Pitambar (Kedar Sharma). I won't be surprised to see them again in "Nartaki."

"Sonehra Sansar" began the "Merry Gang" menace and after vulgarly lampooning the life of the educated unemployed in "Sonehra Sansar", they reappeared in "Sapera", waving tree branches and jumping and dancing to music that suspiciously sounded like the hoodoo hocus of the African Jungle pictures of the Tarzan variety. It is still a mystery how a man of undoubted aesthetic taste like Devaki Bose can tolerate such nonsense in his pictures.

The only reason that can suggest itself to me is his continued adherence to the old dramatic technique which is again illustrated by the presence of the same blind singer right from "Seeta" to "Sapera" in every picture!

Devaki Bose's persistent failure to make purposeful modern films is patent. And so, after every such 'flop,' he reverts to those tales of bygone days, of Gods and Goddesses of Kings and Princesses and romantic poets. Being essentially a poet and a conservative, he will make these pictures with no desire to put any progressive ideals into them. And being a genius he will breathe into them a certain emotional appeal and charm that will be like a soothing balm to the frustrated souls of the romantic youths of the country to whom his pictures have come to mean one more escapist formula for emotional satisfaction. Call it mysticism, call it inspired poetry, I call it hocus-pocus.

And in a country already suffering from an excess of religion, superstition, poetry, mysticism and fatalism, anyone whether he is a Tagore or a Jinnah or a Devaki Bose - who radiates these reactionary influences is a menace.

This is a reproduction of the original published in Film India, August, 1940.