On a dark, foggy night a Thakur is killed while wandering across the swamp of Chandangarh, which is overlooked by the Thakur’s haveli.

The film opens with the arrival of Kumar in Chandangarh. His uncle, who was the jagirdar (landlord), died under mysterious circumstances. The only living heir, Kumar has returned to the village to find the elusive killer. On his way to the mansion, he meets Dr. Pandey, the family doctor. Dr. Pander informs Kumar of the local folklore surrounding the Thakur’s family.

Twenty years ago, Kumar’s grandfather raped a young girl, who consequently killed herself. It is believed by the villagers that this incident has brought down a curse upon the Thakur’s family with every heir being killed in some mysterious way. Kumar’s grandfather was killed soon after the death of the girl, which was followed by the death of his father and then his uncle. But Kumar refuses to believe that supernatural forces are behind the killings and resolves to unmask whoever is behind this conspiracy.

A number of suspects are introduced throughout the course of the narrative. According to the will, in the event of the death of the last living heir, the property would go to Dr. Pandey. Then there is the mysterious and sinister Mohan Babu, whose father had a falling out with Kumar’s grandfather.

Another notable character is Laxman, the servant at the Thakur household. Laxman has a secret. Every night Laxman is seen signaling towards someone hiding at the swamp from the mansion terrace. Is Laxman behind the killings? What might his motives be? A bumbling, inept private investigator called Gopichand Jasoos, who is hired by Kumar to solve the mystery, is also present on the scene. In the midst of all this, Kumar meets and falls in love with a local villager, Radha, the niece of Ramlal vaid, the village healer.

At night, Kumar is haunted by a mysterious singing female voice.  Though he is told this is the vengeful spirit, but he sets about uncovering the person behind the voice. Haunted by the voice every night, he begins to feel like he is being followed by the sound of singing and anklets.

Who is this woman? Is she the vengeful spirit that the villagers talk about? Who is behind these killings? Is Dr. Pandey hiding something? What transpired between Mohan Babu and the Thakur’s family? Who does Laxman signal to at night? Are there really supernatural forces at play or is it all handiwork of a shrewd killer?

The film answers all of these questions in a chilling climax that is bound to thrill every mystery film lover. This film is a loose adaptation of Sir Arthur Conan Doyle’s popular novel, The Hound of the Baskervilles. 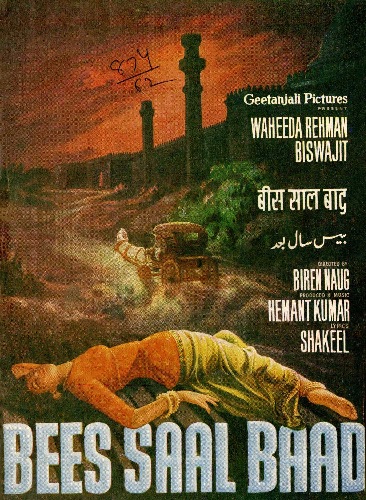