One heart belonged to the educated, rich man's daughter from City, "Chanchal". The other was simple good hearted "Chaila" from village.

"Gouri" was Chaila's adopted sister, whose father was a Postmaster and an old friend of Chanchal's father, Seth Jagjivan Ram. Due to their lifelong friendship, Chanchal's father has decided to marry his son Moti to Gouri.

After retiring, when Gouri was returning to village with her father, Chanchal joined them to go and stay in the village for some days. The beauty, the simplicity of village and its people captured Chanchal's imagination, and when she met Chaila, she gave her heart to him. Gouri was the only one in confidence about their love.

Suddenly one day Seth Jagjivanram arrived with Moti and Gouri was married. The day came when Chanchal had to go back to City. She met Chaila for the last time and both of them realised that inspite of being madly in love, they might not meet again in future.

After a few days a letter from Gouri to her father revealed that she is very unhappy and miserable, as Moti is not only a drunkard, but having relations with some other woman.

She has no place in his heart. Chaila takes up the responsibility to take up the matter and find a solution to make Gouri happy.

He reaches town. A simpleton from the village and is forced to match his wits with cunning, ruthless people of the big city. He meets Badri, a one time theater owner, but now a penniless fraud. He meets Bijli, the flame of Moti's heart, and the main cause of Gouri's misery. He meets many other, troubles and dangerous situations, but finally succeeds in restoring Gouri's happiness. Teaching a lifelong lesson to Moti... Making Chanchal his over forcuer.

You may question, "How did it all happen?"

The answer is, "You must see DO DILON KI DASTAN". 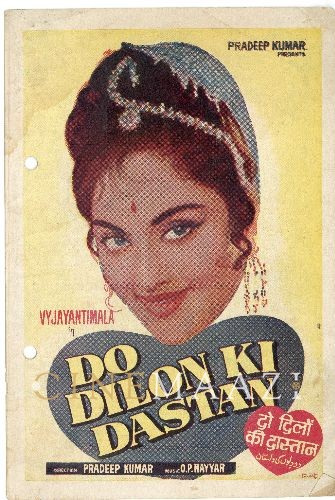