The moghul Emperor Akbar deputes Raja Mansingh to conquer Orissa where the Pathan King Katlu Khan reigns. Akbar advises Raja Mansingh to enlist the help of Raja Birendra Singh, Jagirder of Garh Mandaran. Inspite of the existing enmity between them, Mansingh undertakes to ask for such co-operation.

Raja Mansingh reaches Burdwan and sends ahead his son Jagat Singh to spy on the Military activities of the Pathans. On his way Jagat Singh happens to meet Durgesh Nandini, daughter of Raja Birendra and they fall in love with each other. While Durgesh Nandini is on her way to the Shiva Temple, Katlu Khan's Commander Usman arrests her. Jagat Singh goes to Durgesh Nandini's rescue. A grim fight ensues and finally Jagat Singh is thrown into the quicksand. The timely help of his horse saves him from a horrible death.

Jagat Singh reaches Burdwan and Raja Mansingh sends him this time to Birendra Singh for help. In Birendra's Castle, Jagat meets Durgesh Nandini during 'Holi' festival and their love deepens.

Once, on his way to meet Durgesh Nandini through a secret entrance Jagat Singh is spied upon by Usman, who uses the way to smuggle his men into the fort. The fort is thus captured, Raja Birendra Singh and his daughter Durgesh Nandini are taken prisoners and taken to Katlu's Castle. Jagat Singh however escapes.

Katlu Khan, in order to catch Jagat Singh, throws out a challenge that any Rajput defeating Usman in fair fight, would merit the right to ask for the release of Birendra Singh and Durgesh Nandini. Jagat Singh, against his father's advice, accepts the challenge. However he is wounded and defeated. Thus as a prisoner Jagat Singh is held in the palace of Katlu Khan. Ayesha, Nawab Katlu Khan's daughter, who attends on Jagat, falls in love with him. In the mean time Birendra Singh is sentenced to death. As Katlu Khan desires peace, he asks Jagat Singh to approach his father and make him sign a peace treaty. Jagat Singh refuses and he in turn is also sentenced to death. Ayesha tries to rescue Jagat but is stopped by Usman who learns o her plans. Accused of infidelity by Usman, she is brought for trial before Katlu Khan. Ayesha is also sentenced to death, but Jagat Singh protests that Ayesha is innocent and proposes to fight with Usman unto death. If he won Ayesha was to be released.

In the goary fight that followed Usman is killed and Ayesha is set free. And now Katlu Khan, who is madly in love with Durgesh Nandini, promises to release Jagat Singh provided Durgesh Nandini goes into Kantlu's Harem and signs. This move is misunderstood by Jagat.

At this juncture Raja Mansingh and his Moghul Army attacks Katlu's Castle. Ayesha then leads Jagat and Durgesh Nandini to escape through a secret tunnel. Katlu, once again foils their escape, meets them there and a grim fight ensues. Ayesha, trying to save Jagat is mortally wounded. Mansingh and his soldiers appear in the nick of time. Katlu is overpowered and killed.

Wounded Ayesha, before breathing her last, takes the hand of the man she loves and places it into the hand of Durgesh Nandini, bringing the harassed lovers together. 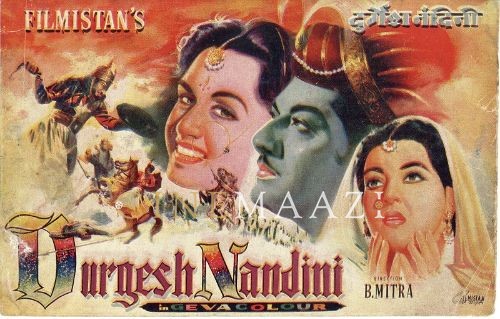