The ruler of Anand Nagar, Raja Vikram had a son after almost twenty years of marriage. But unfortunately, he was stillborn. But on the same day, a poor woman Asha also gave birth to twin sons. Vazir Mangal Singh’s loyalty to the throne promoted him to place one of the twin sons in place of the dead child.

Days passed, Ranjit Singh grew up in the Palace and become the prince of the State, and Ajit grew up in his mother’s hut and become a first-rate marksman. Both the brother Ajit and Ranjit had identical appearances.

One day Ajit Singh set out with his friend Bahadur Singh to take part in an archery competition. On the way, he encountered the outlaw, Mansingh’s gang who had intercepted the coach that was carrying the fiancée of the prince Ranjit. She was Madhumati, the princess of Anjangarh. Ajit fought well but the overwhelming number of Mansingh’s men finally subdued him and he along others was taken, prisoner.

At Mansingh’s den, Ajit was compelled by circumstances to fight a duel with Mansingh in which he defeated the letter. As a reward for the victory, Ajit was set free, but he exchanged his freedom for that of the princess and her maid Chakori. Cupid's arrow had pierced the hearts of both Ajit and Bahadur.

By the time the princess reached the palace of Anand Nagar, she was completely swayed by her love for Ajit and she mistook Ranjit, the prince, for the gay vagabond Ajit. Bahadur also preys to the same misunderstanding, accepted employment in the Royal stable. Asha, the mother of the twins who had come to the town in search of Ajit, meeting Ranjit and assuming him to be Ajit, received such insult and rebuff that her poor heart almost broke.

How the whole secret was revealed?

Did the revelation cause any conflict between the two brothers?

Who was Mansingh? To whom was the princess married?

The answer to all interesting question can be seen in the year’s most thrilling, suspenseful drama “HAQDAAR” 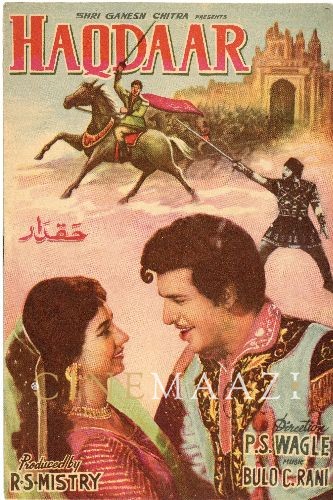