"SHRI GANESHAYA NAMAH" is the first Mantra Chanted in the beginning of every auspicious occasion.

The story of "Jai Ganesh" tells how Lord Ganesh bestows Bliss & Happiness to those who worship the lord and sufferings to these who detest him.

Sagar & Chitra were staunch devotees of Lord Ganesh. They were married at Titwala where in the past Nal-Damayanti and Dushyant-Shakuntala were united by the blessings of Ganpati-Bhagwan.

Chitra's brother Devraj was a non believer while treading on the wrong path, he used to make fun of the great Lord. It was because of Devraj's Villainy that Sagar's teenager sister Geeta died. Affected by the incident Sagar lost all faith in Ganpati, Sagar's wife Chitra, like a true devotee, implored him not to loose faith, but Sagar did not pay any heed to his wife's pleadings and turned Nastik by throwing away Shri Ganesh's idol of worship from his house.

Sagar's father & mother got retired from their activities of life and engaged themselves in teerthyatra of Ganapati Devasthans.
Devraj threw out his parents from the hose and kept a dancing girl Kanchan as his mistress. His sister Chitra was pained by this act of Devraj, but she was helpless, Devraj's parents too moved out for yatra.

When the Devraj's pot of sins was full up to brim, he started to undergo sufferings which ultimately urged him to go to commit suicide. At this stage he was helped by a Pujari whom Devraj had insulted and looted once in the past. Devraj was prepared now for atonement. He was advised by the Pujari to go out for the pilgrimage of Ashta Vinayak.

Sagar was separated by his wife Chitra and his child. He was labouring hard for his existence. While breaking stones, he found Ganesh Murti, which prompted him to start of Ashta Vinayak Yatra.

After lots of trials and tribunals, Chitra meets his children in the Lenyadri Teerth, where the child feels a keen desire to make the Ganesha Murti appear and eat the offerings of Laddoos. The mother of the child and the child pray the Lord who appears in person and accepts the child's offering of Laddus. All were astonished by this miracle performed by the child devotee.

Further how Lord Ganesh's blessings unite the separated family is to be seen on the Silver Screen. 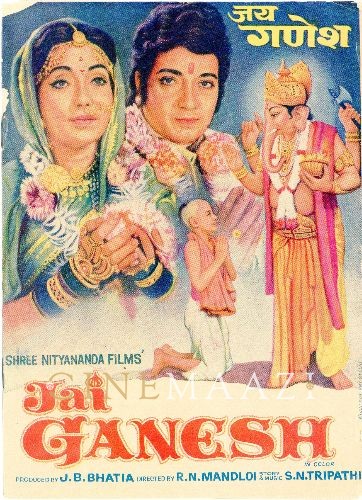