Ways of the everpleasing, everlost, everkind, Shivshankar Tripuari Lord Shiva are different. Who ever prays him with real devotion, fines himself greatest devotee out of a bitterest a thiest who becomes the greatest Shiva-devotee of all time.

Bheel Sutund goes along with his wife Phoolmati and their child, to have Darshan (glimpse) of Lord Shiva at the gigantic Shiva temple of Maheshwar but Rajguru Rudradutta, who virtually reigns the kingdom does not allow Sutund and his wife to go inside the temple. But somehow the child the child gets in and goes before Shiva idol. Learning this Rudradutta gets terribly annoyed and throws the child on the ground of the temple, the child dies in the temple at once.

Sutund takes revenge by stealing Rajguru Rudradutta's child from his palace leaving his wife Sushila crying for her lost child. Soldiers of kingdom follow Sutund Bheel. They cannot find Rajguru's child to whom Sutund hands over the Phoolmati before he dies. Phoolmati runs away with the child and takes refuge at a Bheel village.

Years pass and the stolen child is now a handsome youth named Chanda. Phoolmati brought him up with a feeling of enmity towards Lord Shiva and his devotees.

And circumstances move in such a way that Rajkumari Ratna, Princess of Maheshwar is saved by Chanda from some dacoits and the love at first sight story is repeated again between Chanda Bheel and Princess Ratna.

Chanda wonders how this love between a poor and rich would be possible but Ratna had given her heart to Chanda and when she presents himself before her father the king, he is pleased to see him and gives him reward for his bravery but Rajguru Rudradutta cannot tolerate this and he insults and turns him out of the palace but neither king nor Ratna can do anything against Rajguru's will.

When Phoolmati learns this she remembers the oath taken before her dying husband and sends Chanda to cut off the head of Rudradutt and bring it before her.

Things move fast now. Chanda finds Ratna before him who marries him by presenting a Varamala (groom garland) to Chanda and makes him her husband. Again Rudradutta gives a deathblow to Chanda, his own son.

By inspiration of Narad Muni, Phoolmati brings Chanda back to life after praying Lord Shiva.

But how Chanda becomes the greatest Saint-devotee of his time is the strange thing which you can only find after you yourself witness the greatness of "MAHASHIVARATRI" the sacred night of Lord Shiva, on the silver screen. 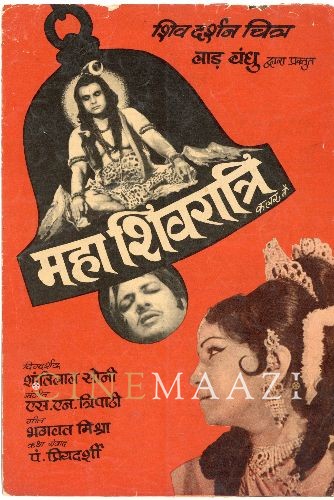