MELA is the story of man's eternal fight against injustice perpetrated in him by Society - but there have been always two types of people - those who take law into their own hands to avenge their sufferings and the other who choose the right means to fight for their rights - Shakti Singh and Kishan, in our story, are the symbols of these two divergent forces.

Shakti Singh, ignoring his mother's warning while leaving for school, forcibly takes his younger brother Kishan to the Mela. They are caught in a cyclone and separated. Mother, goes in search of her children is buried under a tree. Kishan is rescued by a Seva Dal Volunteer in an unconscious condition and taken to city hospital. He loses his memory and before his identity is established he escapes from hospital and accidentally comes under the care of tender hands of a widowed Muslim lady and is brought up by her, without changing his religion.

Thus the orphaned brothers grow up in two different worlds - Shakti, in his village under his unscrupulous uncle, a drunkard who tortures him at every stage, - and Kishan under the loving care of his foster-mother in city grows up as an enlightened man.

Shakti Singh's uncle in league with the village Panchayat not only succeeds in grabbing Shakti's lands but also makes him flee the village after being framed in murder rap which was committed by uncle himself. Thus Shakti Singh turns into an outlaw. In his absence his beloved Santo is raped by village parch and she commits suicide. Shakti swears vengeance and threatens that none but his lost brother could till his fields and those who dare to do so shall face dire consequences.

At this stage Destiny plays its unpredictable part. Kishan Singh purchases the land from his uncle without knowing what is in store for him, and settles down in the village. Lajo, his beloved, pleads with him not to take the suicidal step of ploughing the fields, but he assures her that he will convert any dacoit into a law abiding citizen through love and kindness. In a tense and dramatic moment both the brothers face each other - Love and logic fail and in the consequent confrontation elder brother shoots younger brother - but nature intervenes in saving the deserving police arrive at nick of time while Kishan gets one bullet in the shoulder, Shakti gets two in his back and is compelled to escape for life.

Kishan and Lajo's romance blossoms into real love as the crop in Kishan's fields grow ripe for the harvest, while Shakti helplessly awaits his recovery. The love affair between Kishan and Lajo is whipped up into a scandal - the village panchayat playing villain - Kishan is declared as a Muslim since he was brought up by a Muslim mother and thus try to drive a wedge between the eternal relationship between mother and son - Kishan is faced with the dilemma of choosing between his beloved and mother - he sacrifices his love at the altar of motherhood.

The dreaded climax comes when Lajo's marriage is fixed with some other boy, Shakti selecting this opportunity, after recovery, to wreck his vengeance. He sets fire to the ripe crop and while Kishan rushes to save it, Shakti sets the house on fire trapping Kishan's mother. Kishan rushes to rescue his mother and Shakti kidnaps Lajo from marriage mandap. Kishan rescues his mother and goes after Shakti Singh. In the terrific climax brothers fight like beasts for each other's blood - Shakti is stabbed by Kishan and before dying the relationship comes to light culminating in a highly emotional note - vindicating the saying "Crime doesn't pay". 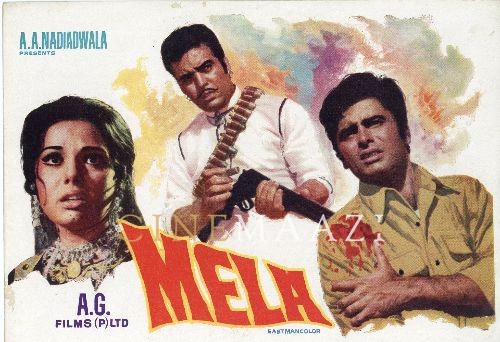