Handsome and well-educated Yusuf inherits his father's estate in Lucknow. To him, gambling becomes just a pastime in the company of Asad, a man without principles and his associates Abboo and Nabbo.

Both Yusuf and Asad are in love with the beautiful Suraiya. Her cousin Mahmud is also secretly in love with her, but she is unaware of it. She believes that Mahmud loves Sabiya, her best friend.

One day Asad sends his mother to Suraiya's aunt with a view to bring about his marriage with her. The aunt rejects the proposal saying that Asad is a wastrel and not a fit husband for Suraiya. The aunt asks Mahmud to marry Suraiya. But noble Mahmud, knowing that Suraiya loves Yusuf suggests that she should be married to Yusuf. He decides to marry Sabiya who loves him deeply.

Infuriated Asad begins to destroy the perfectly happy matrimonial union of Yusuf and Suraiya. He lures Yusuf into the gulf of vice through gambling and drink. He even forges a letter from Mahmud to Suraiya and involves Yusuf into the murder of Mahmud. As the police arrive on the scene. Asad deliberately helps Yusuf to abscond. Hearing of Mahmud's death poor Sabiya goes mad.

With Yusuf in hiding and out of his way, Asad now proceeds to make Suraiya his own. He sends his henchman Nabbo to steal the letter from her house. He obtains the letters but is caught by the police.

Far away from Lucknow, Yusuf finds a job at the quarry of Haji Saheb who is none other than Sabiya's father.

Yusuf comes back to Lucknow in disguise and his heart bleeds to finds Suraiya and child undergoing untold-of hardships with only the faithful old servant Tehsin by her side.

Asad kidnaps Suraiya's child and lures her into his secret den. Since she refuses to marry him, he places the child before the cage of a tiger and opens the door. Yusuf comes up in the nick of time in the disguise of Gunga and saves the child. Just then the police arrive with Tehsin and others and Asad is arrested. 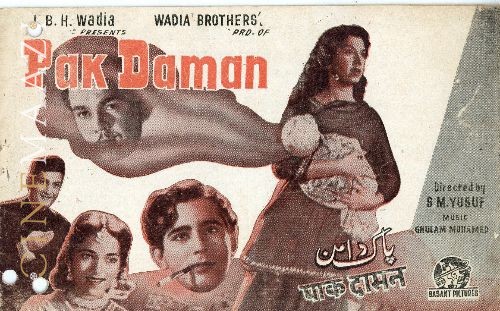