What lies buried deep in the dark recesses of one's mind nobody knows and the less one cares about it. But that `What' may be so powerful and it may have such an explosive influence in one's life that it may lead to innumerable miseries and immeasurable agonies. This is what happened in Baruna's life.

Pratap met Baruna for the first time on his way to Simla where he was to see his bride-would-be selected by his mother. He found Baruna such a charming and nice girl, so decent and well-behaved that he abandoned the idea of further proceeding to Simla and he, instead, proposed to marry Baruna, and got a ready consent from her father Khusiram.

Baruna made a wonderful wife. But soon Pratap started realising that something somewhere was wrong with Baruna. She used to have severe headaches almost every evening, the family doctor failed to understand or diagonse it. Sometimes she would get lost, completely unaware of her surroundings. Sometimes she would get up from the bed in the middle of night and stroll in the house. Pratap, then, got really worried when one night he saw her having gone completely crazy and playing a record on the radiogram at full volume and dancing to it, till she fainted. To Pratap's utter surprise when asked in the morning, Baruna did not remember having done any such thing.
Pratap's mother, who also had witnessed the dancing, was convinced that Baruna was haunted by some evil spirits and to drive away that spirit, she called an Ojha, and had Pratap not come home in time on information from his sister Ruki, the Ojha might have burnt her to death. Pratap drove the Ojha out of the house, and thinking that some change of atmosphere could help, he brought Baruna to Calcutta. But a time came, when Pratap himself wanted to kill her. That night when Pratap was fast asleep, Baruna got up, dressed herself and proceeded on a taxi to a posh club of the city. There she danced and drank with a stranger and when Pratap approached her and asked her to come home with him, she not only did not respond to the name Baruna (She gave her name as Peggy) but she denied to have ever married or seen Pratap. Her companion on the table, on hearing this gave some blows to Pratap. The incident was enough to make Pratap want to kill her. But when he returned home, he found the bedroom locked from inside. He waited on the verandah and finally when Baruna opened the door in the morning, she behaved in such a way as if nothing had happened last night. On being asked she denied all that frantically. But Pratap would not believe her, not now. He drew out his revolver and was about to pull the trigger on her, when last night's stranger, Dilip arrived on the scene. Pratap thought it was all something pre-arranged, but he was puzzled and so was Dilip, when Baruna denied having ever seen or met Dilip. There was a ring of such sincerity in her voice that made Pratap withdraw his gun. Baruna was brought to a mental clinic and the doctors said it might be a case of split personality. She was kept in the clinic under observation. But before the doctors could get a chance to cure her, she slipped out of the hospital. Peggy's personality came back, she had been away from clinic for quite a few days. She now realised that really something had been wrong with her all along. She rushed to her home, to her loving husband, whose child she was going to give birth to.

But her return home was not welcomed by her mother-in-law who informed her that Pratap is going to remarry and that Shila from Simla is the bride. She said, Baruna now had no place in this house. Turn out of the house, she saw her husband driving in with Shila seated by his side.

Now? Now where would she go? Shall she kill herself? But could she kill the little soul which was yet to be born. What really was the trouble with her? Who was this Peggy?

What lied buried deep in the dark recesses of her mind? And finally what conditions and what people were responsible for all her miseries and agonies? To know the answers to all these baffling questions, see "RAAT AUR DIN". 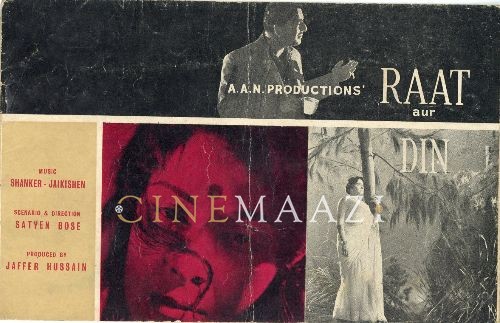