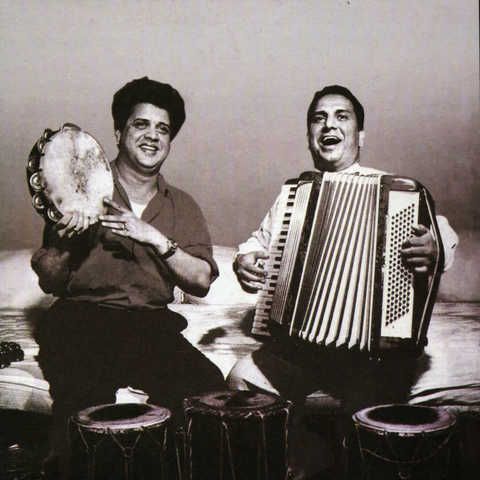 Mera joota hai japani from Shree 420 (1955), Teri pyari pyari surat ko from Sasural (1961), Ehsaan tera hoga mujh par from Junglee (1961), Bol radha bol from Sangam (1964), Baharon phool barsaao from Suraj (1966), and Zindagi ek safar hai suhana from Andaaz (1971)… Shankar-Jaikishan, the creators of these evergreen melodies, among Hindi film music’s best-loved gems, are rightfully acknowledged as the Emperors of Hindi film music. Renowned for the immortal and everlasting compositions they created particularly in the 50s and 60s, they are the golden pair of the golden era of film music. Holding an unrivalled position in the Hindi film industry, they were the highest paid music directors of the time, often earning more than the leading actors, and often featuring more prominently on the promotional material of films than any of the cast and crew! Scaling dizzy heights with their trend-setting music for their very first film Barsaat (1949) itself, Shankar-Jaikishan became a permanent team of R K Films, besides scoring music for films outside the banner as well. They pioneered a new sound in Hindi film music, employing their knowledge of Indian classical music combined with western beats and orchestration, using the latter to enhance the emotion of the song rather than merely a filler, as was the norm. Their best work was noted for being raga-based, and they were known to include at least one song of a semi-classical style in every film they worked on, such as Jhanak-jhanak tori baje payaliya in Mere Huzoor (1968), and Chham chham baje re payaliya from Jaane-Anjaane (1971). Even as raga Bhairavi remained a favourite of the duo, they also used the western classical-based waltz rhythm in many of their songs. Scoring for films of all genres and periods, they displayed their astounding creativity and versatility for more than two decades. Conferred the Padma Shree in 1968, they also collected 9 Filmfare Awards for Chori Chori (1956), Anari (1959), Dil Apna Aur Preet Parai (1960), Professor (1962), Suraj (1966), Brahmchari (1968), Pahchan (1970), Mera Naam Joker (1971) and Baiman (1972). Their mass popularity can also be gauged by the fact that the topped the Binaca Geetmala Hindi film music countdown radio programme, with their songs declared the most popular on six occasions—a record later equalled by Laxmikant Pyarelal.

Shankar was born Shankar Singh Raghuvanshi on 15 October, 1922 in Hyderabad. Learning the tabla formally from Baba Nasir Khansahib, he was a disciple of legendary composer Khawaja Khurshid Anwar, performing in his orchestra, post which he started his career with a theatre group run by Satyanarayan and Hemawati. Moving to Prithvi Theatre, he played the tabla and also performed minor roles in plays, besides mastering other instruments such as the sitar, accordion and piano. His tryst with music direction started when he began assisting leading composer duo Husnlal Bhagatram. It also sowed the seeds of his desire to be a solo music director.

The other half of the famous duo, Jaikishan was born Jaikishan Dayabhai Panchal on 4 November, 1929 in Gujarat. Proficient at playing the harmonium, he went on to train under Sangeet Visharad Wadilalji followed by Prem Shankar Nayak, and eventually under Vinayak Tambe, after he moved to Bombay.

The two met outside the office of Gujarati director Chandravadan Bhatt. Bhatt had promised to give Shankar a break when he produced a film, and Jaikishan too was hoping to be given a break by the filmmaker. Chatting casually, they took a liking to each other, with Shankar also assuring Jaikishan of a job as harmonium player with Prithvi Theatre. Once Jaikishan joined Prithvi, they grew closer, coming to be known as ‘Ram-Lakshman ki jodi’ by those who knew them. Besides playing roles in different plays, they would also compose tunes together. As luck would have it, they also interacted with Raj Kapoor, who was assisting Kidar Sharma while hoping to pursue a career as an actor-director. When Raj Kapoor was set to make his directorial debut with Aag (1948), Ram Ganguly was assigned the music for the film, assisted by Shankar and Jaikishan. As luck would have it, when differences arose between Kapoor and Ganguly during the recording of a song for Kapoor’s Barsaat, the latter assigned the music to Shankar. Shankar roped in Jaikishan as his partner, and thus did the Shankar-Jaikishan music director duo take their bow with their first solo project. Barsaat was a path-breaking film musically. It featured a title song namely Barsaat mein humse mile, as well as a cabaret Patli kamar hai. It also saw the formation of a new team, comprising Shankar-Jaikishan, lyricists Shailendra and Hasrat Jaipuri, and the budding new voice, Lata Mangeshkar.

Over the years, Shankar Jaikishan built up a formidable success rate. No less than 75% of their films were smash hits, with many celebrating golden and silver jubilees. Winners of 9 Filmfare Awards for Chori Chori (1956), Anari (1959), Dil Apna Aur Preet Prayee (1960), Professor(1962), Suraj (1966), Brahmchari (1968), Pahchan (1970), Mera Naam Joker (1971) and Be-Imaan (1972), they were also recipients of Cine Goers Association Award, Bombay Film Journalist Award and Sur Singar Sansad, besides of course the prominent Padma Shree in 1968.

Their musical creativity found its source in a range of inspiring elements. Borrowing from Egyptian, Arabian, Italian and even tunes of Gypsy music, they Indianised and transformed the same to wonderful effect, creating an original sound. They also revolutionised the concept of an orchestra in song compositions, using it as a medium to express and enhance the meaning and mood of the song rather than using it simply as a filler. Breaking new ground in Hindi film music, they relied on their base of Indian classical music, also incorporating western beats and orchestration. While it was their practice to include at least one song in every film based on semi-classical style, they also used the western classical-based waltz rhythm in many of their songs. Interestingly, they also gave a new dimension to sad songs by composing them on a quicker tempo, as seen in compositions such as Zindagi mein hardam rota hi raha from Barsaat, Tera jana dil ke armanon from Anari, and Haye tu hi gaya mohe bhool re from Kathputli. All in all, they are credited with popularising Hindi film music across the spectrum.

Forming a core team with noted lyricist Shailendra as well as Hasrat Jaipuri, they worked with singers such as Mohammed Rafi, Lata Mangeshkar and Asha Bhosle. After the demise of Shailendra, they worked with other lyricists such as Indeevar, Gulshan Bawra, Gopaldas Neeraj, Verma Malik, Majrooh Sultanpuri, Vithalbhai Patel and Rajinder Krishan. They also enjoyed the long-standing support of their loyal assistants Dattaram Wadkar and Sebastian D'Souza, who supervised their rhythm section, and wrote musical notations for all their compositions, respectively. They also employed the talent of singer Manna Dey, who rendered some of his best songs with them, as well as the dulcet tones of Mukesh's used exclusively to render playback for Raj Kapoor. Shankar-Jaikishan were also known to be commercially savvy, which saw them holding their own despite the presence of other noteworthy talents such as Naushad, C Ramchandra, Roshan, SD Burman, OP Nayyar, Salil Choudhury and Madan Mohan, and securing their place at the top.

Interestingly, even though they worked as a team, Shankar and Jaikishan would compose their songs separately, Shankar generally working with lyricist Shailendra, while Jaikishan combined forces with Hasrat Jaipuri. Shankar, as the senior of the two, would usually arrange the orchestra for Jaikishan's songs as well. There existed a pact between the two to never reveal the actual composer of a song. However, it is accepted that dance numbers, theme songs and soulful songs were Shankar's forte while Jaikishan excelled at romantic songs, background scores, and simple, catchy compositions. Overall, each also contributed to the other’s creation, whether it was improvising a tune or in the orchestration of the song, thus making every composition a joint effort.

Besides film music, the duo also contributed to the development of jazz music in India and the new Indo jazz genre. Their album Raaga-Jazz style released in 1968, the earliest Indo-jazz recording in India, is a product of innovation with the pair creating 11 songs based on Indian ragas employing the saxophone, trumpet, sitar, tabla, and bass.

After Jaikishan passed away prematurely on 12 September, 1971, Shankar continued with the banner of Shankar-Jaikishan as per their previously agreed upon mutual understanding. The music, however, was never able to match the earlier standards set by the duo. Shankar passed away on 26 April, 1987. In 2013, a postage stamp bearing their likeness was released by India Post in honour of Shankar-Jaikishan.

Over a long and phenomenally successful career, Shankar-Jaikishan had composed approximately 1304 songs for 179 films, carving their name in the annals of filmdom for all time.