'Sahib Bibi aur Ghulam" is the story of Bengal at the turn of the 19th century when the powerful Zamindar dominated the social life of the province. One such Zamindar family, that of the Chaudhuris, lived in a palatial mansion, "Badi Haveli,"

Manjhle Babu and Chhote Babu were the two brothers who owned "Badi Haveli"—the ancestral property that had come down to them through earlier generations. Both, in keeping with the traditions of the family, were given to a life of lethargy and philandering where wine flowed and the tinkling anklets of 'nautch' girls were preferred to the endearing smiles of the wives. Chhote Babu's wife, Chhoti Bahu, a middle-class woman accepted by the landed aristocracy in marriage for her great beauty, could not however reconcile herself to the libertine habits of her spouse. Deprived as she was of the love and presence of her husband, Chhoti Bahu's spirit rose in revolt. But tradition, as much as the high walls of 'Badi Haveli" effectively checked her from giving expression to it.

Having read that the application of "Mohini Sindoor" would bring back for her the errant husband, Chhoti Bahu, sent for Bhoothnath to get her the Sindoor Bhoothnath soon emerged as her confidante and sympathiser

To bring her errant husband back to her, Chhoti Bahu, set an example of self-sacrifice that left everyone in Badi Haveli stunned with surprise. It will leave you too, stunned when you see "Sahib Bibi aur Ghulam". 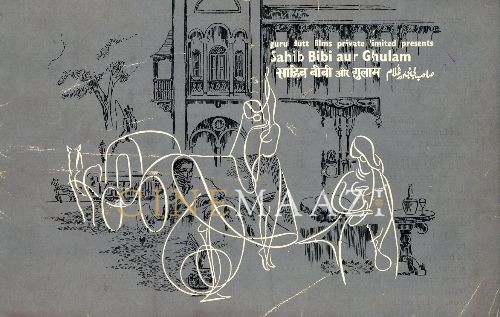