SHANKAR SHAMBHU, is the story of two decoits of CHAMBAL GHATI, who were not only great friends but were more than brothers for each other. They were brave men of actions and deeds. SHANKAR gets entangled by the charms of MUNNI BAI, a damsel of ill fame inspite of persistent alarming of SHAMBHU.

KUNDAN, a parmour of MUNNI BAI, who is a great smuggler lavishes his luxuries on MUNNI BAI with the interior motive to get the two decoits leave CHAMBAL GHATI and that they proceed to BOMBAY and he very tactfully succeeds in his object. Incidently a poor girl, named SHALU is in frantic need of financial help for her mother's ailments. Suddenly she confronts a box which appears to her as a treasure. Thus tempted she steals it with the result that she is arrested by the Police of BOMBAY.

The efficient Police Organisation of Bombay waste no time to trace the presence of the two decoits SHANKAR-SHAMBHU in Bombay. Being in dire need of money SHALU decides to be an approver, but with the close association of SHANKAR, she develops a fancy for him. On the other side SHAMBHU always insisted that SHANKAR should not get involved with SHALU and this is how SHALU becomes an obstacle between them.

In the meantime, KUNDAN, banking on the notoriety of the two decoits gets them labelled as anti-nationals to further his own smuggling activities by doing misdeeds in their names. SHANKAR-SHAMBHU are bewildered by all this. The Police stamp them not only as criminals but also as unsocial and anti national characters. On further investigation, it comes to light that SHALU Et SHAMBHU are the children of Inspector General of Police who were lost during their INFANCY.

The Inspector General of Police is now on the horns of dilemma. His mental struggle is between his duty towards law and his fatherly love towards his own daughter and her fiance SHANKAR, who is also a confirmed traitor in the eyes of the LAW. SHANKAR-SHAMBHU could manage to meet SHALU and wipe out the STIGMA attached to all of them

ALL THESE EXCITING & THROBBING ADVENTURES CAN ONLY BE WITNESSED IN A.K. MOVIES PRESENTATION- SHANKAR SHAMBHU in EASTMANCOLOUR ON THE SILVER SCREEN. 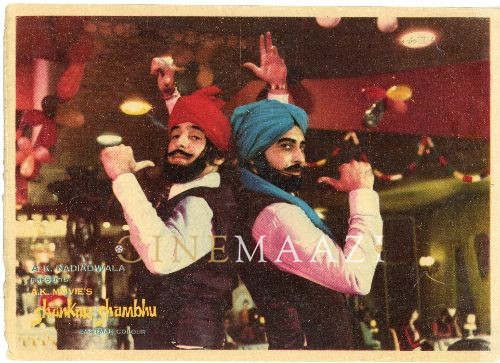 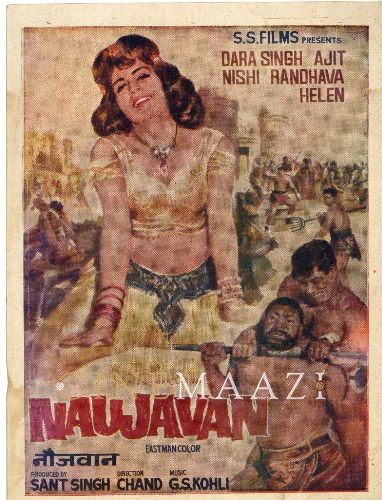