Mohan is the lost soul of this story - a well–to–do person, disillusioned with city life, seeking peace of mind in the countryside. He is accompanied by Chandu, his bosom pal. When their car passes out cold on the highway, they alight. They are charmed by the rustic scene around them and by the group dance in which the beaus and belles of the village have joined with gusto. Mohan is particularly taken with the beauty of one of the girls, Suraj, while Chandu has been smitten at sight of Suraj's companion, Gulabo. Having established themselves in the dak bungalow, the two friends cast about for ways of approaching their hearts' desire. In the guise of bangle-sellers they are successful in making contact with the girls. Mohan, who has put on the aspect of an oldish man, suddenly blossoms forth as a fortune teller, and tells Suraj and Gulabo that two strangers, one tall and handsome, the other short and portly, will arrive at their door next day and ask to be shown the way. To these persons, he tells them confidently, they will in due course be married.
Fate intervenes. Two unscrupulous persons overhear this forecast and immediately arrive at the door of the girls' house. Unthinkingly, the gullible girls (sisters by relation) welcome them into the house and treat them right royally-all the time under the impression that these are the two persons the fortune-teller had referred to. At night, when the entire household is asleep, the two lotharios steal the entire wealth of the household of widowed Jamunabai and her two daughters, Suraj and Gulabo—and quietly slink out of the house. Morning finds the two girls utterly disillusioned.
So that, when the real two strangers (Mohan and Chandu) arrive during the day, they are taken for thieves and turned over to the police. Mohan's manager comes post-haste from the city to get his boss and Chandu released. It has by now become necessary for Mohan to masquerade again as a bangle-seller-cum-fortune-teller. He corrects the misunderstanding in the minds of the two girls, and, the ground thus prepared, the pair of lovers ultimately meets.
But the progress of love is never smooth. The theft has left the girls and their mother almost destitute and they are in debt to Girdharilal, the one-eyed mahajan of the village to the tune of five thousand rupees. He clamps down hard and asks for an immediate return of his loan—or else, he says, he must have Suraj's hand in marriage.

Mohan cannot tolerate this insult to his loved ones and leaves for the city to get the requisite amount. Fate—unkind Fate—again intervenes and the train carrying Mohan crashes against another. When Mohan emerges from the hospital, miraculously saved from the jaws of death, he bears a long and disfiguring scar on his left cheek.

It is this scar which changes his entire outlook on love and life. He begins to lose faith in Suraj's true love. In the meanwhile, the period of grace stipulated by Girdharilal has expired, and Suraj perforce consents to marry him, rather than ruin her mother.

When Mohan returns to the village, he does not have the courage to show his face to Suraj. Chandu has a futile job convincing him that she will not turn away from him because of his disfigurement. Ultimately he takes courage and goes to her house, but finds her asleep. Happening to look at his reflection in the mirror above her bed, he decides against awakening her and, quietly placing the five thousand rupees he had brought, by her side, he walks out of the house. It happens that Girdharilal has followed him unobserved into the house and, unscrupulous person that he is, he picks up the bundle of notes left by Mohan and pockets it. Suraj is entirely unaware of what has transpired.

Mohan leaves the village. On the morning of the day fixed for her wedding with Girdharilal, Suraj is nowhere to be found. Rather than face life with Girdharilal, she has chosen to encounter the hardships of a wandering life.

Mohan ultimately arrives on the brink of a well, bent on ending his life—for he thinks nobody wants him because of his disfigurement. Rami, a simple girl from the village nearby, stops him just in time and tells him he is being a fool; besides, she says, if he jumps into the well the village won't have any water to drink. She takes him to her small cottage where she stays with her peasant father and blind brother. She tries to instil faith in Mohan by giving him the instance of her blind brother who yet hasn't given up life as a futile thing. Mohan slowly recovers his faith, gradually convinced that people do like him inspite of his disfigurement. Rani, simple and unaffected as she is has in the meantime fallen in love with Mohan, even though she is fully aware that he is in love with Surai. Whether she gets him or not, you will see on the screen. And, again, what about Surajrnukhi? Does she remain estranged from Mohan? 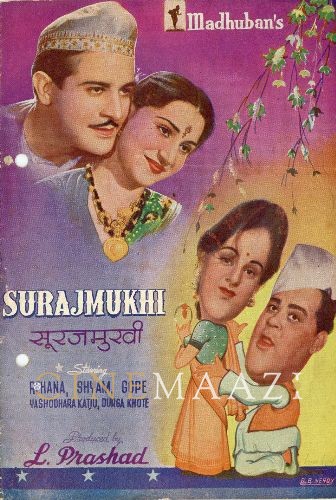