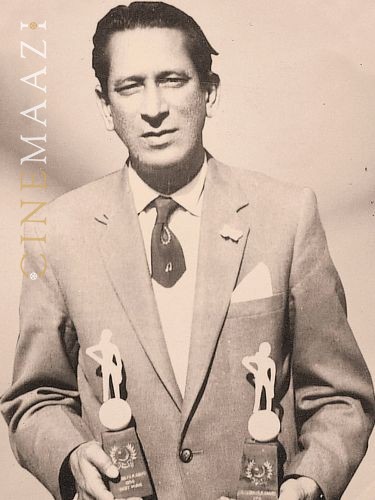 Among the few highly educated personalities in the film industry, Khurshid Anwar was a popular and highly regarded composer of the 40s. Called Khwaja by his fans, he was also a filmmaker, writer, and director, who won recognition for his original and significant work in India, as well as in Pakistan where he migrated in 1952. Starting off as Programme Producer (Music) in All India Radio, he moved to score music for films such as Kurmai (Punjabi, 1941), Ishara (1943), Parakh (1944), Yateem (1945), Parwana (1947), Paghdandi (1947), Aaj Aur Kal (1947), Singhar (1949), Nishana (1950), and Neelam Pari (1952). Writing the story and screenplay for films such as Hamraz (1967), Chingari (1964), Ghunghat (1962), Jhoomer (1959), Zehr-E-Ishq (1958), and Intezar (1956), he also directed Ghunghat, Chingari, and Hamraz. He co-produced Hamraz, Chingari, Ghunghat, Zehr-E-Ishq, and Intezar, and produced Jhoomer. Conferred with several honours and awards including Sitara-e-Imtiaz (Star of Excellence) Award by the President of Pakistan in 1980, and Mortal-Men-Immortal-Melodies Award in 1982 in India, he was also decorated with the Nishan-E-Imtiaz, Pakistan’s prestigious award, in 1982.

Khurshid Anwar was born in Mianwali, currently in Pakistan, on March 12, 1912. His father, Khwaja Ferozuddin Ahmad was a well-known barrister settled in Lahore, as well as a classical music enthusiast, who was known to organise regular musical soirees in his house, which were attended by leading classical singers of the time such as Ustad Abdul Waheed Khan, Ustad Bade Ghulam Ali Khan, Ustad Tawaqqal Hussain Khan, Ustad Ashiq Ali Khan, Rafiq Ghaznavi and Firoz Nizami. He also possessed a wide collection of gramophone records of Indian classical and neo-classical music. Influenced by the musically-redolent atmosphere, Khurshid went on to receive musical training under Ustad Tawaqqal Hussain Khan, acquiring both skill and knowledge. Brilliant at studies as well, Khurshid studied at Government College of Lahore. Influenced by Bhagat Singh, his anti-British sentiments saw him being arrested during his college days. In fact, he even appeared for his BA exam from prison, and passed with a first-class. Applying for his Masters in Philosophy, he topped the University and won the Nanak Gold Medal, following which he appeared—and again topped—the prestigious Indian Civil Services exam in 1936. However, his political beliefs saw him being rejected in the interview by the British board.

Anwar went on to join the All-India Radio Delhi in 1939 as a programme officer. At the time, his good friend, poet Meem Rashid, as well as writer Saadat Hassan Manto were also working in the drama department. A chance meeting with producer-director A R Kardar, who had visited All India Radio, saw an impressed Kardar offering Anwar the opportunity to score music for his next production. Kurmai (1941), directed by J K Nanda, was the first Punjabi film to focus on the evil practices of dowry. Though the film did not succeed at the box office, Anwar’s tunes in the film became very popular, especially songs such as Suraj ne layee bahar mitti banai sona, Dil injh injh karda, Gote da haar we main, and Maaye ni buhaa khadake. The film’s noted director J K Nanda and Anwar went on to work together again in Ishara (1943), which was a big hit. It was Anwar’s first Hindi film, and all 9 compositions scored by him impressed with their distinct flavours, be it the evergreen Panghat pe muraliya baje, or the duet Baghon mein koyal boli, meri dil ki duniya doli. Thus, did Khurshid Anwar's talent gain recognition, as he became a much sought-after composer.

He went on to compose the music for Parakh (1944) along with Saraswati Devi, who composed two songs in the film. On the recommendation of AIR composer Roshan, he also gave singer Ira Nigam a break, rendering two popular songs in the film, namely Koi kya jane ise dard hamara kya hai and Duniya hai ae pyaar ki dunkiya. The year 1947 saw Anwar scoring music for Aaj Aur Kal and Pagdandi. While they did not make a splash musically, his compositions for Parwana (1947) were well-appreciated. The last film of K L Saigal, which also starred Suraiya, the songs of this J K Nanda directorial, became very popular. The film includes the Suraiya-rendered Papi papihaa re pi pi na bol and Mere mundere na bole ja kaga, kaga ja, as well as the Saigal-rendered Toot gaye sab sapne mere, ye do naina sawan bhado barse saanjh savere, which is regarded as one of his best.

While Khurshid Anwar’s music was based on classical and folk tradition, in particular Haryanvi folk music, he included not only Indian but also western instruments in his orchestra. His contribution to classical music is embodied in the set of 10 long-playing records of ragas recorded in the voices of different classical singers, called Ahang-e-Khusravi that he created.