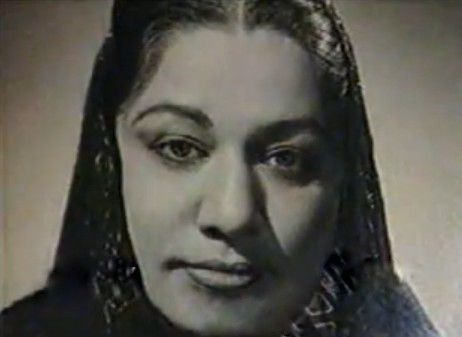 An accomplished classical singer known for her contralto and her unique, robust and unrestrained style of singing, Zohrabai Ambalewali was part of the first generation of Hindi cinema’s playback singers. Along with Shamshad Begum, Rajkumari, and Amirbai Karnataki, she was one of the prominent singers of the 40s, the formative decade of film music, who started singing in pre-Independent India and went on to lay the foundations of the mega music industry that was to develop. Her voice had a distinct quality, which made her songs stand out from the rest. She is synonymous with her film songs Dil ke sheesh mahal mein from Amber (1952), Rhum jhum barse badarwa, Ai Diwali, and Sawan ke baadlo unse ye ja kaho from the film Rattan (1944), Aahen na bharin shikave na kie from Zeenat (1945), Duiya chadhaye phool from Sanyasi (1945), Uran khatole pe ud jaoon from Anmol Ghadi (1946), Rut rangili aayi chandni chayi from Mirza Sahiban (1947), Phir aah dil se nikli from Mela (1948), Pardes na jaiyo mausam suhana hai from Nishaan (1949), and Mere darde jigar ki har dhadkan from Nausherwan-E-Adil (1957).

Among the films she rendered playback for were Gramophone Singer (1938), Geet (1944), Pehle Aap (1944), Devar (1946), Elaan (1947), Chunariya (1948), Mahal (1949), Dil Ki Basti (1949), Preet Ka Geet (1950), Jadoo (1951), Kashmir (1951), and Usha Kiran (1952).
Born Zohrabai Khatoon in 1918 in Ambala into a musically-inclined family, her talent was spotted and nurtured from a young age by her grandfather. He facilitated her training under two great Ustads of the time - Ghulam Hussain Khan and Ustad Nasir Hussain Khan; the latter trained her in the Agra gharana of Hindustani music, a robust, unrestrained style that Zohrabai would later bring to her film music. In order to further help her growth as a singer, her grandfather enabled the family to shift to Delhi. Aged just 13, Zohrabai started her career recording thumris for the gramophone company HMV. Her song Chote se aangna me gilli khelen was to make her a popular name. As a radio artiste, she sang mainly classical and semi-classical numbers. Her break in films came with Daku Ki Ladki (1933), which had music composed by Pransukh Nayak.

Married off at a young age, her husband, the popular tabla player Faqir Muhammad did not put a stop to her singing as was the norm but encouraged her talent.

Moving from the Lahore-based film industry to Bombay, she went on to sing for music director Naushad Ali in Rattan (1944), delivering popular, hit songs. Most of her best work was to ensue under the music direction of Naushad in films such as Anmol Ghadi, Mela, and Jadoo. She made her mark singing the first-ever Qawwali recorded in female voices in South Asian films, along with Noorjahan and Kalyani. Titled Aahen na bhareen shikave na kiye, it featured in Zeenat (1945).

Zohrabai’s career petered off in the 50s. The era of heavy thumris and female singers with nasal voices was on its way out. The late 40s had ushered in the trend of finer voices of Lata Mangeshkar, Geeta Dutt and Asha Bhosle. Zohrabai’s last song was Mere dard-e-jigar ki har dhadkan in Nausherwan-E-Adil in 1957. Post that, she retired only to perform briefly in Satyajit Ray’s Jalsaghar (1958). She did continue to sing at her noted kathak dancer daughter Roshan Kumari’s concerts, though, till the end.

Zohrabai Ambalewali passed away on February 21, 1990. Despite not enjoying a protracted reign, Zohrabai’s distinctive and inimitable style of singing remains unique and not easy to emulate. She is remembered for her haunting voice and immense contribution as a founding pillar of the early era of Hindi film music.