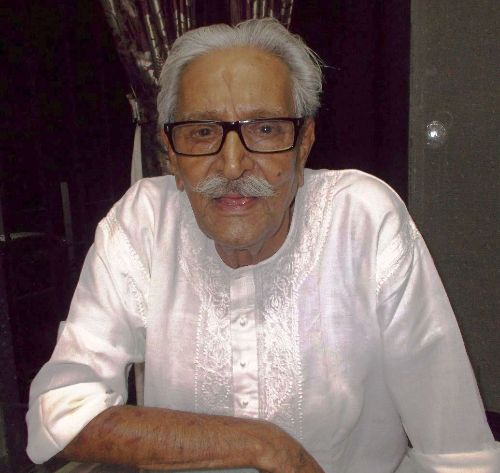 Shyam Kapoor is perhaps best remembered onscreen as the handsome young lad who, along with well-known dancer Sheela Vaz, performs the song Leke pehla pehla pyar in the Dev Anand-Shakeela starrer C.I.D. (1956). He was an assistant director with Guru Dutt and is known for films such as Mr. & Mrs. '55 (1955), Pyaasa (1957) and Qaid (1975). Other films he has to his credit as assistant director include Resham Ki Dori (1974),

Born on 24 April, 1928 in Lahore’s Chooniyaan tehsil, he was very small when his mother passed away. With his father being a postmaster at Quetta, he and his older brother Banarasi Dass stayed with their paternal grandparents at Chooniyan. Completing their schooling till standard 8, they shifted to a hostel in Lahore for further studies. He was in standard 12, and his brother in his B.A. (final) when Partition took place. Leaving their education incomplete, they had to move to Ludhiana with their grandparents, even as their father got transferred to Dehradun from Quetta.

After the stipulated three months of social service at a refugee camp in Kurukshetra, both Shyam Kapoor and his brother earned their respective degrees without having to take any examinations. They also received job offers from the government which they happily accepted, and he joined as the P.A. to the camp officer Col. Puri.

He was later sent to the newly founded Alwar Head Office for the Rajasthan-based refugee camps. However, his services were later terminated as the refugees from Peshawar and Rawalpindi flatly refused to shift to Rajasthan, resulting in the closure of the Alwar camp. After a stint in Kurukshetra, he joined his uncle’s sugar business in Ambala, and later came to erstwhile Bombay, with a navy officer whom he knew, on his helper’s pass. His boarding and lodging in the city was also arranged by the same navy officer. Shyam Kapoor was 21 at that time.

His main aim was to see the city of Bombay by riding the tram from Colaba to King’s Circle. On one such occasion, he stopped to watch a film shooting in progress at King’s Circle. According to the scene being shot, some boys were to be filmed sitting in a truck, who had to chase and tease the girls who were sitting in a car. One of those boys had to speak the line ‘East meets west’ which he failed to deliver despite many attempts and retakes.

At this point, Shyam Kapoor asked the supplier if he could try it. Though the supplier ignored him, the assistant asked him if he could speak the dialogue. As he nodded affirmatively, he was taken in front of the camera, and the shot was cleared in the first take itself! The next day, he went across to Dadar Naka to collect his payment, where he met many more junior artistes and became part of the network. For the next few years, he worked continuously as a junior artiste. During the same time, he met actor-filmmaker Guru Dutt during the shoot of the club song Babooji dheere chalna, pyar me zara sambhalna in Aar-Paar (1954). In one of the shots, Kapoor had to get up from his table, come over to Shakeela and immediately return to his table, angry, after finding Guru Dutt staring at him. Dutt appreciated his work and was further impressed by Kapoor’s choice from among the two versions of the song that had been shot.

He went on to join Guru Dutt as an assistant, taking the place of Niranjan Sharma. He joined the unit of the film Mr.& Mrs.55 in September, 1954 during the filming of the song Udhar tum haseen ho idhar dil jawaan hai being shot at Mehboob Studios. From that day onwards, he worked with Guru Dutt till his death.

As he was friends with CID director Raj Khosla’s assistants, Pramod Chakravorty and Bhappi Soni, he often visited the sets of the film. One day he was informed by Guru Dutt that he would have to feature onscreen in the film’s song Leke pehla pehla pyar bharke ankhon me khumar. The song was shot at Worli sea face within three days.

Interestingly, after Pyaasa was shot up to 12-13 reels, its trial show was arranged along with that of CID. However, Guru Dutt was disappointed with Pyaasa, and decided to halt work on the film till CID was released. CID proved to be a big hit, and Guru Dutt resumed work on Pyaasa’s script. Johnny Walker’s role was added to the script, as well as the character of the hero’s friend who deceives him. This negative role was essayed onscreen by Shyam Kapoor. The film was reshot, and proved to be a big hit.

He also served as assistant director on Kaagaz Ke Phool (1959), along with Niranjan Sharma and Gobind. Shot four times more than the average, the film flopped, losing the money generated by C.I.D. and Pyaasa. Kapoor would reveal that its failure had shaken Guru Dutt’s self-confidence badly, leading him to do films like Sautela Bhai (1962), Bharosa (1963), Bahurani (1963), Suhagan (1964), and Saanjh Aur Savera (1964) for outside producers--officially he never directed a film after Kaagaz Ke Phool.

Kapoor was associated with the Guru Dutt Films Combine till 1976. Afterwards, he tried to direct films independently but all three films which he started got shelved due to various reasons. Constrained to quit direction, he started a production job. As a production controller, he worked on films such as Darinda (1977), Professor Pyarelal (1981), and Sohni Mahiwal (1984). He then joined the company owned by TV show producer-director Ajay Sinha. Here, he handled the production of popular TV serials such as Hasratein, Astitva, Ghar Ek Sapna, Gudgudi, and Kesariya Balma, among others.

He bought a flat in Guru Dutt Apartments on Fisheries Road, Versova, which was completed in the early 1970s.

It was meant to be a residential building for the permanent staff of the company in remembrance of Guru Dutt, who had passed away suddenly in 1964.

Retiring from active work, he leads a quiet life. One of his two daughters lives in Canada and the other daughter and one son are settled in America. Of his Mumbai-based sons, one is a stuntman in films and the youngest one runs a computer business.