Professor Pyarelal is the story of—the son every mother prays for, the friend every man is proud of, the lover every woman dreams of, and the enemy every villain fears. Pyarelal and Ram are inseparable friends living together in London. Ram is a man of multiple talents, surviving on his wits and nefarious activities, whereas Pyarelal is a highly respected and amiable professor teaching in a London college. But one day, destiny takes a cruel turn and Pyarelal becomes the unwitting victim of a police bullet meant for Ram, who has been carrying contraband for smugglers. In his dying moments howver, Pyarelal reforms Ram forever. He dies telling the police that he is Ram, and accepts the entire guilt of his friend’s past crimes.

Overcome by this sacrifice, Ram gives up all his illegal activities and returns to India to break the sad news to Pyarelal’s blind mother, Shanti Devi. But there, overwhelmed by the affection she showers on him, mistaking him for her real son, Ram is unable to tell the harsh truth, and for her sake, dons the mantle of Professor Pyarelal.

Destiny now brings Ronny, a youthless gangster on the scene. Posing as a film producer, Ronny buys the plot of a brilliant jewel robbery from Pyarelal and executes the theft of diamonds worth Rs. 50 crores, for which Pyarelal, Sonia, a charming young girl, and Rai Bahadur are all implicated. The police however learn that Pyarelal is really the son of a heroic police officer, who had been killed years ago in the course of duty, and being therefore convinced of their innocence, send Pyarelal and Sonia to London on a mission in search of Ronny and the diamonds.

A wild hunt follows as soon as they land in London and Pyarelal is taken to the man called King of the underworld. But he is shocked to find that the King is none other than Kishinchand, the long lost husband of Shanti Devi. Thinking that his family had died years ago in a fire, Kishinchand had entered into the world of crime. Pyarelal claims to be his son, but the treacherous Ronny has already arrived there earlier, and deceived the King into accepting him as his real son. A battle royal ensues, in which Ronny’s wife, Rita, is killed and Ronny himself exposed and banished from the King’s castle.

Meanwhile Rai Bahadur manages to trick Ronny’s accomplices, and reaches London with the diamonds, which he is forced to hand over to the King. The vengeful Ronny, then kidnaps Shanti Devi, who has also come to London, and forces Pyarelal to exchange the diamonds for his mother—not on land or sea, but in mid-air. The terrifying exchange then takes place between two planes 20,000 ft. above the ground, and a death defying spectacle follows, as both Pyarelal and Ronny jump out of a burning plane, fighting for the diamonds in a spine-chilling sky fight to the finish. These spectacular aerial stunts form the thrilling climax of Professor Pyarelal, the like of which has never before been witnessed on the Indian screen. 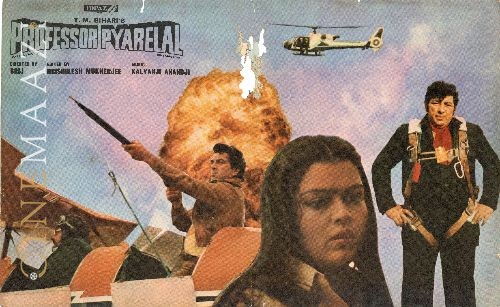 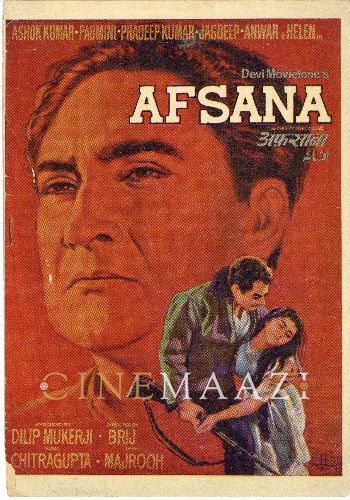