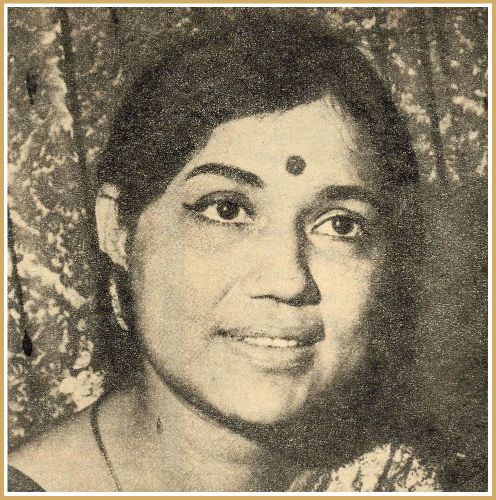 With her elder sister Krishna Kumar already an actress, it was only a matter of time before Sankaramanchi Janaki came into her own on the screen as the actress Sowcar Janaki. Born in December 1931 in the East Godavari district of what was then the Madras Presidency, Sowcar Janaki was married at the early age of 14. Her film career flourished post her marriage, a rarity in her times. Over the course of her career, Janaki appeared in nearly 400 films in Tamil, Telugu, Kannada, Malayalam, and Hindi. She was also a stage performer with around 300 shows to her credit as well as a radio artist.

Though she was born in the Madras Presidency, she received her degree from the Guwahati University in Assam, and an honorary doctorate from the University of Arizona. Janaki happened to attend an audition for All India Radio. She excelled in the audition and started recording programmes for children and soon graduated to singing on air. Impressed by her singing, B.N. Reddy visited her and offered her a chance to act in his film. Janaki was excited and wanted to accept the offer but her brothers and mother were opposed to her joining the films. The family decided it was time to marry her. The family of Sankaramanchi Srinivas, the radio supervisor at Kakinada, came asking for her hand and Janaki was married off at the age of fifteen. Janaki became Sankaramanchi Janaki.

Her husband did not earn enough. By then a young mother, Janaki was forced to look for a job. The seventeen-years old with a child in hand approached B.N. Reddy, who arranged for a screen test and selected her to act opposite NTR in Shavukaru (1950), the maiden venture of Vijaya Productions to be directed by L.V. Prasad. Janaki was paid a princely sum of 2,500 rupees. With the signing amount, she bought clothes and baby food for her child. During the shooting of the film, Prasad became her mentor.  He taught her to act and to create a style of her own. The director would never hesitate to reprimand her in order to extract the right emotions. The film was a runaway hit. The title of the film became a prefix to her name as her fans and journalists started addressing her as Shahukar Janaki, the first-ever in the film industry. Shahukar became the legendary ‘Sowcar’ over time.

She appeared in the Kannada films Devakaanika, Sadarame (1956), and Thayige Thakka Maga (1978). Janaki made her Malayalam film debut with the famous School Master (1964) and ventured onto the Hindi screen with Teen Bahuraniya (1968). In her Tamil films, she was frequently paired with Sreekanth, Gemini Ganesan, and Sivaji Ganesan. Post-1975, she started accepting supporting roles in movies like Cinema Paithiyam (1975) (Tamil), Thee (1981) (Tamil), Thillu Mullu (1981) (Tamil), and Vetri Vizha (1989) (Tamil). Essaying a variety of roles, Janaki remained active in the field of acting for nearly seventy years, a career comparable to stalwarts like Dev Anand, Pran, Ashok Kumar, and Kamini Kaushal.

Pudiya Paravai was a turning point in her career. This was Sivaji’s first home production. He was insistent on casting Janaki in a glamorous role, much against the wishes of the director, Dada Mirasi. The film was a big hit. Sivaji and Sowcar went to be the lead pair in many films.

The multi-talented actor executed varied roles in her time. By the time, she appeared in Rojulu Marayi, she had three children. Yet she could slip into the shoes of the protagonist easily, playing an innocent shy and young girl romancing her co-star ANR. In Kanyasulkam (1955) she played the role of Buchiamma, the young widow opposite NTR. In Doctor Chakravarthy, she played the possessive wife of ANR. Her stamp of individuality in her expression in the scene where she keeps looking at the watch, as she is bored became quite famous. In Pudiya Paravai, she played the role of a nightclub singer with shades of grey. Janaki gave a convincing portrayal as the alcoholic club dancer out to ensnare the hero. The sophistication and the sensuousness exhibited by the actor in the dance number ‘Paartha nyabakam illaiyo’ became immortal!  During the shooting, she didn’t like the dress that the costume designer had stitched for her and the director wanted her to wear. She offered to wear something that she had personally bought from Hong Kong a couple of months ago, which she suggested would look better. The director agreed. That’s what she can be seen wearing in the song.  In Kaviya Thalaiva, her own production directed by her mentor, K. Balachander she plays the protagonist who sacrifices her life for her daughter’s sake. Janaki played a double role essaying the role of mother and the daughter, earlier played by Suchitra Sen in the Hindi version, Mamta (1966). Janaki considered this as a lifetime role that impacted her greatly. In Ethir Neechal and Bama Vijayam, her role was comic. Her comic timing was so well appreciated that she was repeated in the Telugu (Mugguru Kodalu) and Hindi (Teen Bahuraniyaan, 1968) versions.

If Reddy found her and L.V. Prasad cultivated her, it was K. Balachander who re-discovered her. At the height of her career, she made the unusual choice of acting on stage, joining her mentor’s theatre group in 1965.

Janaki lacked the looks for the glamorous roles. However, she did not let that deter her. She worked hard on her performances. Success came to her by and by and she went on to do 400 films in different languages. At her peak, Sowcar Janaki acted with several great actors such as MGR, Sivaji Ganesan, and M.R. Radha. She has to her credit thirty Kannada movies out of which ten were with Raj Kumar. She also did two films in Malayalam. She dubbed for all the movies in her own voice with the perfect accent demanded by the language.

She was last seen in a Telugu film titled Babu Bangaram (2016) starring Daggubati Venkatesh and Nayanthara.

The Tamil Nadu government bestowed on her the Kalaimamani award. She was also the recipient of the Lifetime Achievement award instituted in the name of the legend, ANR (Swarna Kankanam). She was conferred with the Sivaji award as well.

Blessed with two daughters and a son, four grandchildren and two great-granddaughters, Janaki’s granddaughter Vaishnavi has followed in her footsteps and is a famous actress in her own right in Tamil movies from 1987 to 1996.

Janaki lives in Bengaluru in the estate belonging to her sister.  It was her mother’s wish that the sisters stay together. Krishna’s husband sold 8,000 sq ft. in their estate in Bangalore to Janaki on which she built her home named ‘Sai Kuteer’. There was no compound wall and the sisters would often walk into each other’s homes. 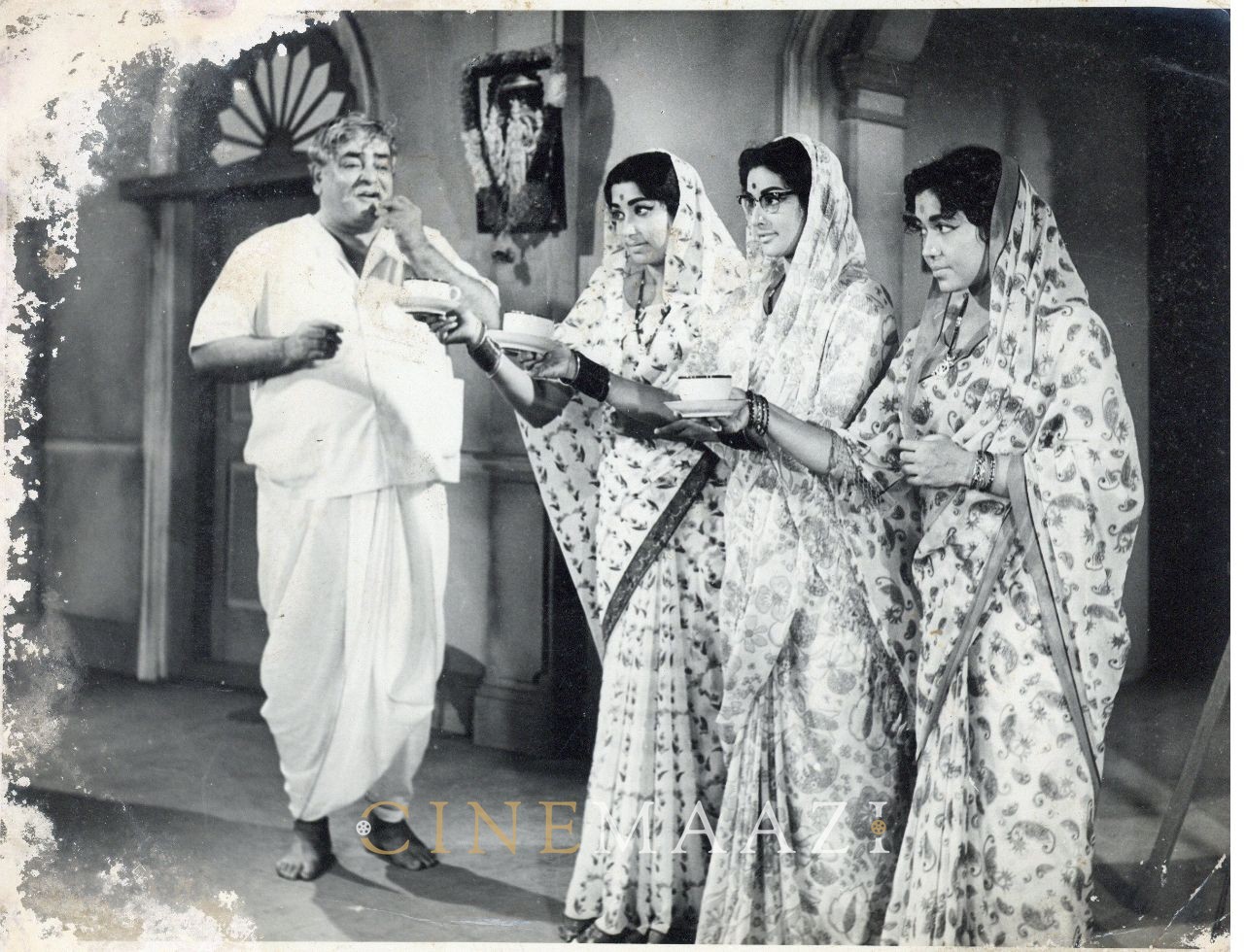 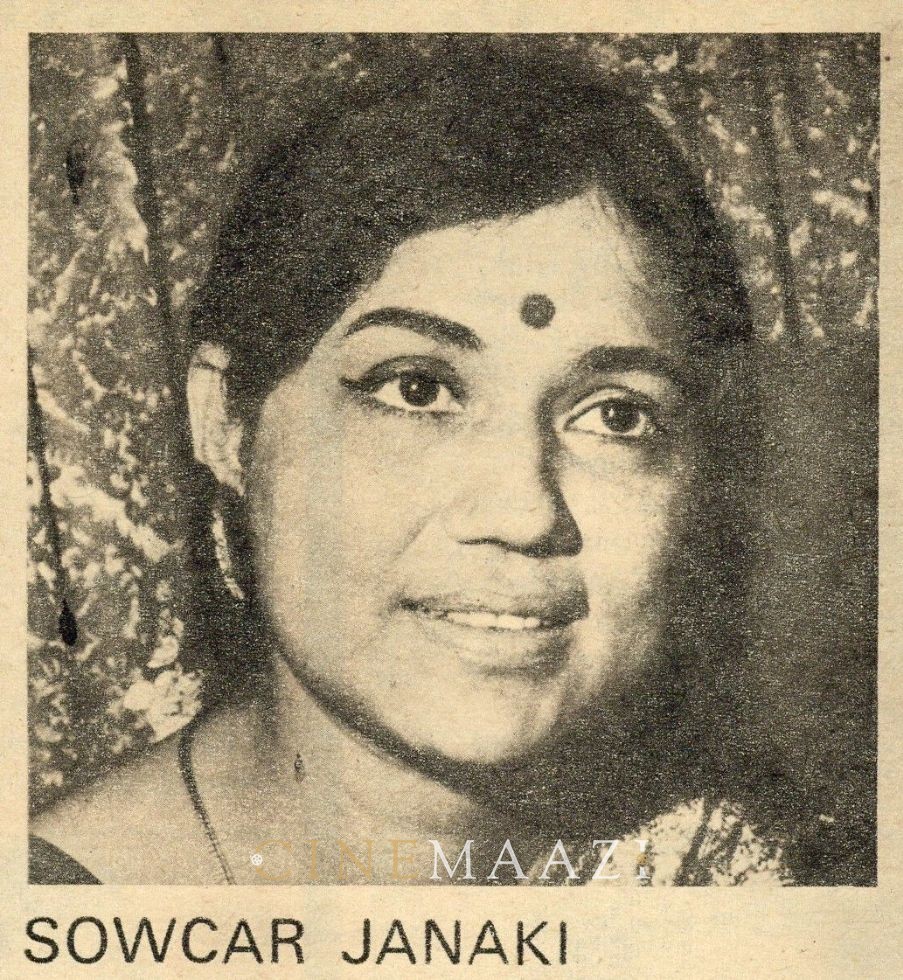