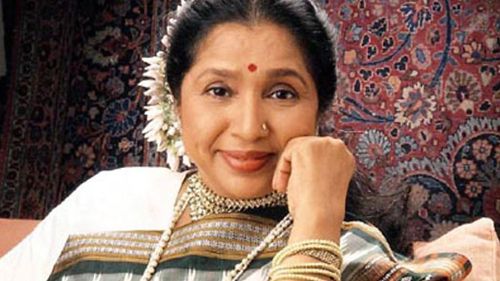 The “Most Recorded Voice on the Planet” and doyen of Indian film music, Asha Bhosle has carved a niche for herself as enchantress par excellence. Her voice has been innocent, naughty, reverent and arrestingly sensual. She has encompassed the pristine Hindustani classical singing as well as styles from across India, twists on disco, polka, waltzes and Latin music. A versatile chanteuse, Asha has put her heart and soul into modulating her ebullient voice to emerge with something original and creative. Asha, the queen of South Asian pop, has sung semi-classical styles as well as all the culture-hopping pop hybrids for Hindi film composers. The Helen-Bindu repertoire, mostly of cabaret and other seductive numbers, merely put a ‘Vampremium’ on the sensuous slant always ingrained in the vocals of Asha. Her mellifluous voice oozed sweet-toned innocence in her renderings. Asha has created a treasure trove of tunes for the spellbound listeners. She is numero uno on the rostrum and her youthful persona refuses to wither away.

Her singing career can be considered as having four milestones - Naya Daur (1957), Teesri Manzil (1966), Umrao Jaan (1981) and Rangeela (1995). From Madhubala to Helen to newer actresses Urmila Matondkar and Kareena Kapoor, the divas are bound by a common thread - the evergreen voice of Asha Bhosle. In 1957, O.P. Nayyar signed her to sing the heroine’s songs in Tumsa Nahin Dekha and Naya Daur. In the 1970s, Asha came closer to R.D. Burman, who gave a new hip and happening sound to her singing. In the 80s, Asha went on to shatter her pigeon-holed image as a ‘cabaret singer’ and a ‘pop crooner’ by singing immortal ghazals in Umrao Jaan, which fetched her huge accolades.

Asha Bhosle was born on 8th September, 1933 in the village Goar (District: Sangli, Maharashtra). Her father Pandit Dinanath Mangeshkar was a theatre artist and a classical singer. She learnt to sing in classical style from her father. She lost her father when she was nine years old. To support the family, she and her elder sister Lata started singing in films. Composer Datta Dawjekar noticed a lot of promise in Asha and recorded her first song Chal chala chala nav bala for the Marathi movie Majha Bal (1943). Asha Bhosle, sharing the experience of her maiden recording, revealed that she became very nervous when she was to raise her pitch while rendering the song. However, Datta Dawjekar never lost his patience and ultimately recorded the song after six takes. The satisfaction she derived that day is still fresh in her memory.

Hansraj Behl introduced Asha to the Hindi film music arena by giving her a chance to sing a chorus Sawan aaya re (Chunariya, 1948) with Zohrabai and Geeta Dutt. He taught her the nuances of various ragas and antaras, which helped Asha to improve her singing capabilities. The following year, he recorded two solos with Asha - Hain mauj mein and Hamare dil par for the film Raat Ki Rani (1949). At that time, prominent playback singers monopolised the “heroine songs”, whilst Asha used to get the residual assignments in second-grade movies. Her melodious rendering of Dharti se door and Dard bhari kisiki yaadin Sangdil (1952) gave her recognition. Consequently, film directors like Bimal Roy and Raj Kapoor gave her opportunities to sing in films like Parineeta (1953) and Boot Polish (1954) etc.

Asha first met O.P. Nayyar at the music recording of Chham Chhama Chham (1952). O.P Nayyar was so impressed by her talent that he got Asha to sing 11out of 12 songs in this film. He astutely capitalised on Asha’s bass voice and brought to her vocals a razzmatazz, enabling her to depart from the Lata oeuvre. After Mangu (1954), he gave her a major opportunity in C.I.D. (1956) establishing her true identity as a singer. The chartbuster Naya Daur (1957) proved to be her major breakthrough. Reportedly B R Chopra wanted Lata Mangeshkar to sing for Vyjayanthimala, but O.P. Nayyar insisted on Asha. After 1959, she was emotionally and professionally involved with Nayyar. She remained the first choice in the music room of O.P. Nayyar for 15 years from mid-1957 to mid-1972. Their team created some of the best breezy and sensuous numbers Aaiye meherbaan (Howrah Bridge, 1958) and Yeh hai reshmi zulfon ka andhera (Mere Sanam,1965) etc. They also recorded songs for many hit films like Phagun (1958), Naya Daur, Tumsa Nahin Dekha, Howrah Bridge (1958), Ek Musafir Ek Hasina (1962), Kashmir Ki Kali (1964) etc. Asha Bhosle was singer number one in the song lexicon of O.P. Nayyar. He composed Chain se hum ko kabhi (Pran Jaye Par Vachan Na Jaye,1974) with her peerless persona in his mind. Once the charismatic O.P. Nayyar began to fade from the film music scene, Asha broke away from him and this composition became symbolic of their swansong.

R.D. Burman often created special tunes to explore Asha’s range and potential. From their first pairing in Teesra Kaun (1965) to Shaan (1980) and finally, to Ijaazat (1987), he explored many innovative styles. She had to scale different octaves after every line in Dayya yeh main kahan aa phansi (Caravan, 1971). The ritzy mode that he devised for her got so hyped, that her widening range went unexploited by a composing herd submissively hooked on her proclivity to be provocative. Their collaboration worked wonders with her voice, while a medley of composers helped further enrich Asha’s thematic thesaurus.

Teesri Manzil (1966) launched the process of making Pancham-Asha inseparable on the musical template. When she first listened to the tune of the song Aaja aaja main hun pyar tera, she was afraid of singing the Western dance number. After rehearsing for 10 days, when she sang the song, the result was fantastic and R D Burman gave her a 100-rupee note as a prize memento. Pancham-Asha’s youthful Western songs took the Hindi film screen by storm: the raunchy cabaret Piya tu ab to aaja (Caravan, 1971), the rebellious Dum maro dum (Hare Rama Hare Krishna, 1971), the sexy Duniya mein logon ko (Apna Desh, 1972), the romantic Chura liya hai tumne jo dil ko (Yaadon Ki Baaraat, 1973) etc. In the 1980s, they created subtle numbers like Mera kuch saaman and Katra katra for Ijaazat (1987).

Khayyam also got her to sing in his first film Biwi (1948).S. Madan made his debut with Yeh raat yeh fizayein (Batwara, 1961). Jaidev got Asha to sing in Hum Dono(1961), Mujhe Jeene Do (1963), Do Boond Pani (1972) and other movies.Shankar Jaikishan worked relatively less with Asha. However, the team produced quite a few hits including the seductive Parde mein rehne do (Shikar, 1968). Madan Mohan recorded a number of songs in Asha’s voice including the popular folk number Jhumka gira re (Mera Saaya, 1966). Composer Anu Malik and Asha have recorded many hit songs including Filhaal (Filhaal, 2002) and Kitabein bahut si (Baazigar, 1993) among others.A.R. Rahman is given the credit for Asha Bhosle’s comeback with Rangeela (1994). Its songs like Tanha tanha set many a heart on fire. They went on to deliver many more hits in films like Daud (1997), Thakshak (1999), Iruvar (1999), Taal (1999), Alaipayuthey (2000), Lagaan (2001), Meenaxi (2004). Sandeep Chowta got her to sing Kambakht ishq (Pyaar Tune Kya Kiya, 2001). The prolific south Indian film composer Ilaiyaraaja began employing Asha Bhosle’s vocals in the early 1980s beginning with Sadma (1983).

Asha’s popularity is not confined only to Indian shores; her international forays happened long ago with artistes like Boy George and Stephen Luscombe. In 2002, she teamed up with Michael Stipe on the track The Way You Dream. Asha Bhosle had a formidable set of pipes and saris more sparkly than Shakira's bustier collection. Bhosle has performed live concerts in various countries, where a drooling audience of expats awaited her. As she trills and flirts, you'll hardly realise you've been seduced by an octogenarian. Asha has also reinvented herself in the mainstream pop music genre. In 1996, she released her first album Rahul and I. Her follow-up album Janam Samjha Karo, won an MTV Award in 1997. She began to compose her own songs with the album Aap Ki Asha. She recorded a solo album titled Love Supreme and You've Stolen My Heart with the Kronos Quartet.

In 1995, Asha underwent the ‘Gatha Bandan’ ceremony with Hindustani classical music maestro Ali Akbar Khan to learn a classical repertoire. Later, they recorded 11 bandishes in California for Legacy, a private album that won them a Grammy Award nomination. Asha has sung ghazals for many albums like Meraj-E-Ghazal, Aabshar-E-Ghazal and Kashish, the last of which was a tribute to Noorjehan. In 2005, she released a self-titled album Asha, a tribute to the four ghazal maestros Mehdi Hassan, Ghulam Ali, Farida Khanum and Jagjit Singh. She practices riyaaz everyday till date. She has also sung devotional songs in albums such as Bala Main Bairagun Hoongi. After six decades of singing, she made her debut as an actress in Maaee.

Asha Bhosle has had a turbulent personal life. When she was 16, she eloped with her sister Lata’s secretary Ganpatrao Bhosle and tied the knot against the wishes of her family. The marriage failed miserably. Years later, she married a much younger R.D. Burman in 1980. Asha Bhosle’s two sons Hemant and Anand have had stints with the Hindi film industry while her daughter Varsha worked as a columnist. Her grandson, Chaitanya Bhosle also ventured into the world of music. The film Saaz (1997) was supposedly based on the reported rivalry between Lata and Asha. While there may be professional rivalry it is not to be mistaken as enmity.

Asha is an excellent cook and she often gets flooded with requests by Hindi film celebrities for kadai gosht and biryani. A successful restaurateur, Asha also runs restaurants in Dubai, Kuwait and Birmingham(UK).

Her musical repertoire consists of film music, ghazals, pop, classical music, folk songs, qawwalis, bhajans, and Rabindra Sangeet. She has sung nearly 12,000 songs in more than 950 Hindi films. She has also rendered songs in 18 languages including Hindi, Marathi, Bengali, Gujarati, Punjabi, Tamil, English, Russian and Malay. Her Marathi bhajans, natya geets and bhaav-geets are all a rage in Maharashtra to this day. Her interpretation of saint-poet Dnyaneshwar's Kanadawo Vithallu is very popular.

She has sung duets with Manna Dey and Binod Chattopadhyay in Bengali. Sudhin Dasgupta and Nachiketa Ghosh were her frequent collaborators in Bengali. She sang for films like Chadmabeshi (1971), Mouchak (1974), Bandi (1978), Kalankini Kankabati (1981). She has also sang for many Durga Puja albums. For R D Burman’s 75th birth anniversary she created the album Pancham Tumi Kothay.

She has sung many bhavgeet songs in Marathi. In the 1950’s she was a major playback singer for Marathi films. She won Maharashtra government’s Best Singer Award in 1962 for the film Manini (1961).

The versatility of her voice and talent has been acknowledged through a host of awards conferred on her. Asha Bhosle was bestowed the Padma Vibhushan in 2008 and was conferred with the Dada Saheb Phalke Award in 2000. There are umpteen numbers of other awards conferred by the State Governments. She has bagged the National Award twice for Umrao Jaan and Ijaazat; Filmfare Best Playback Singer Award eight times and Filmfare Lifetime Achievement Award in 2001. In 1974 all three nominations for the Best Playback Singer Award were hers. She won her last Filmfare Award in 1979 for Yeh mera dil (Don), following which she wrote a letter to Filmfare to stop considering her for future awards and to reward younger talents instead.

One of the most iconic voices of Indian cinema, Asha Bhosle has crafted a legacy that is unmatched in terms of the sheer variety, creativity and skill of her work. 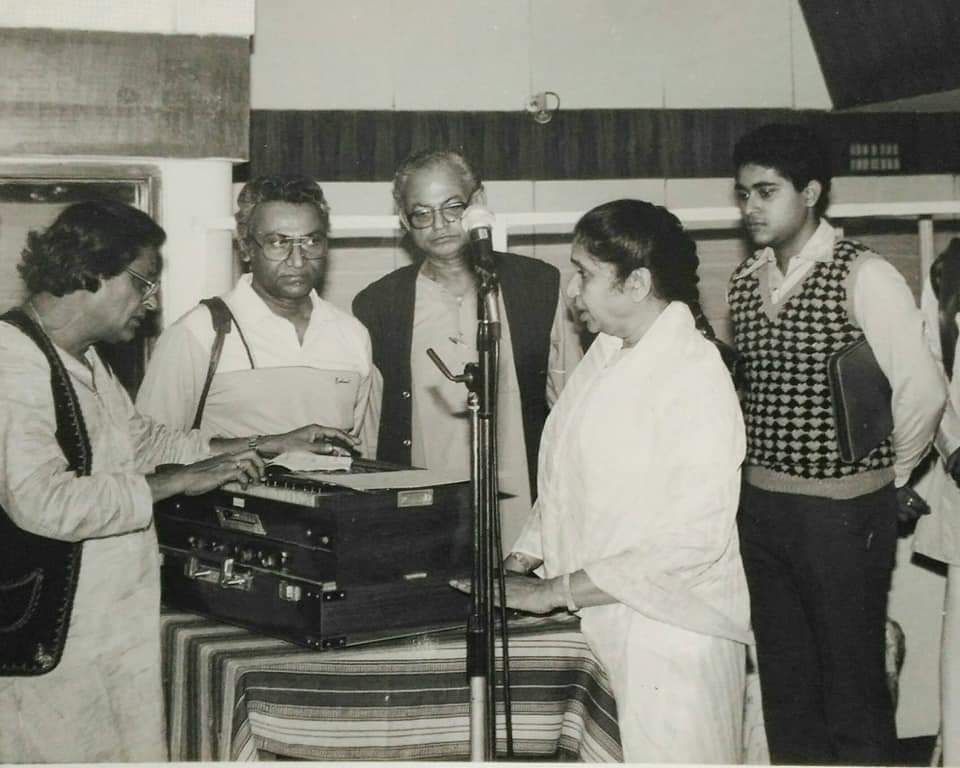 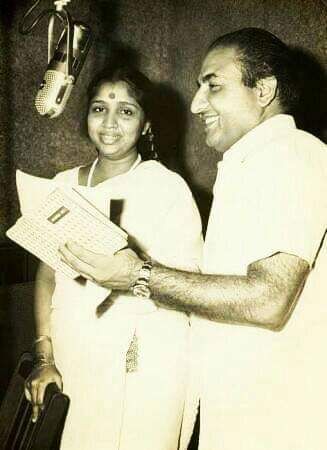 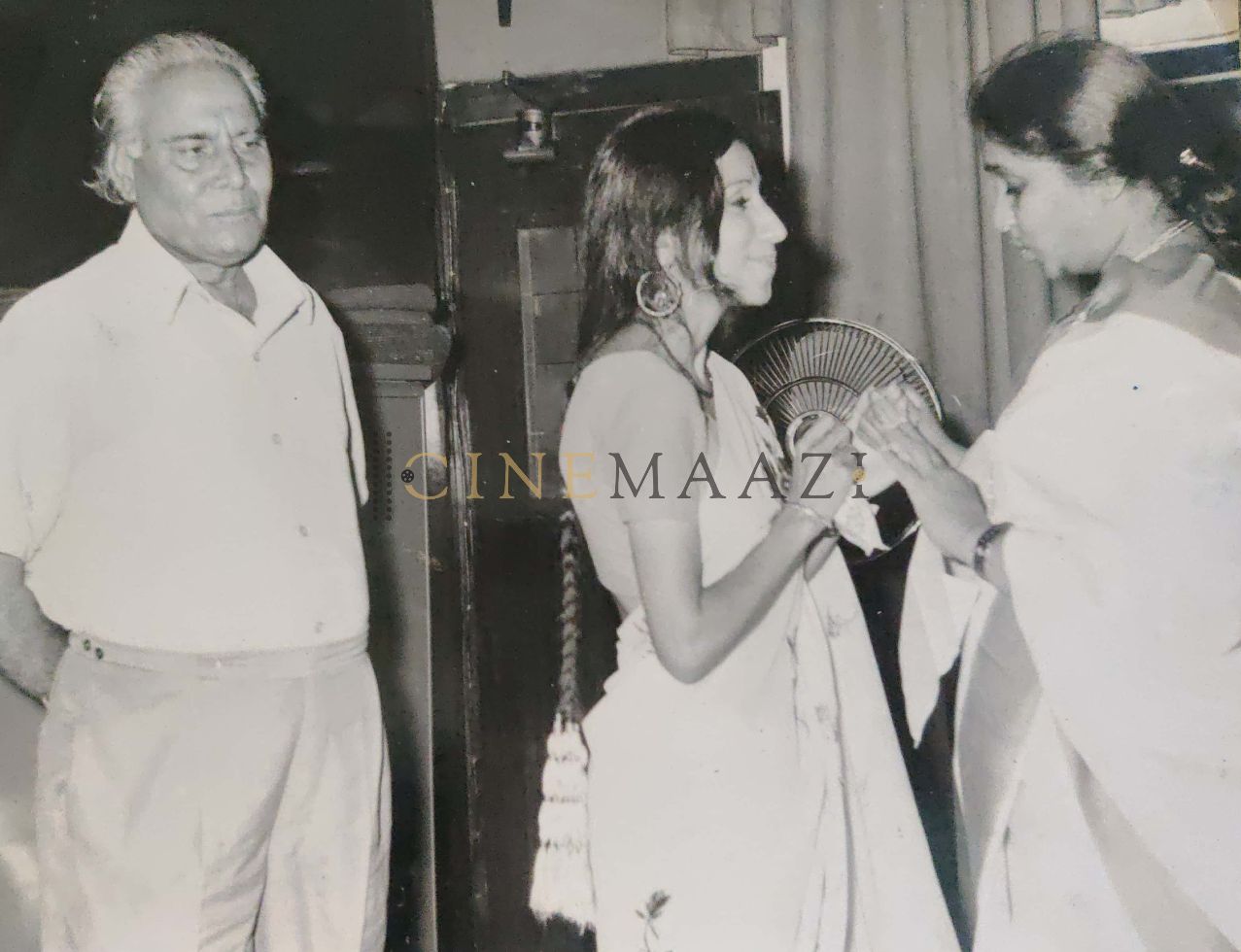 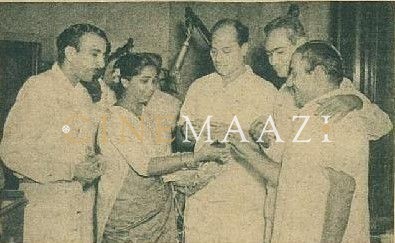 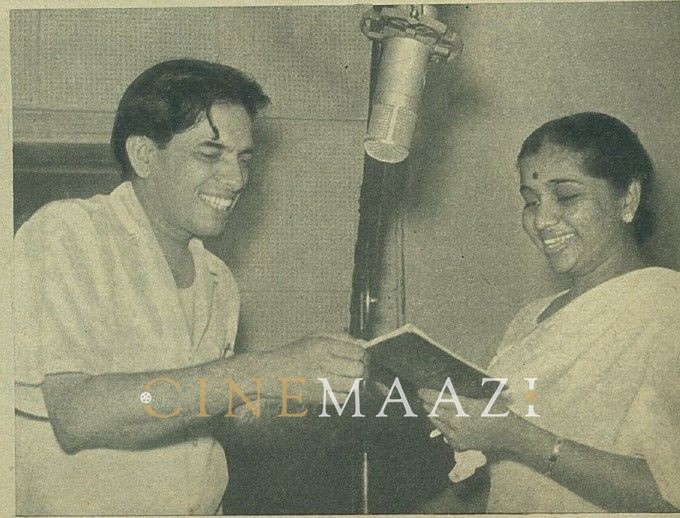 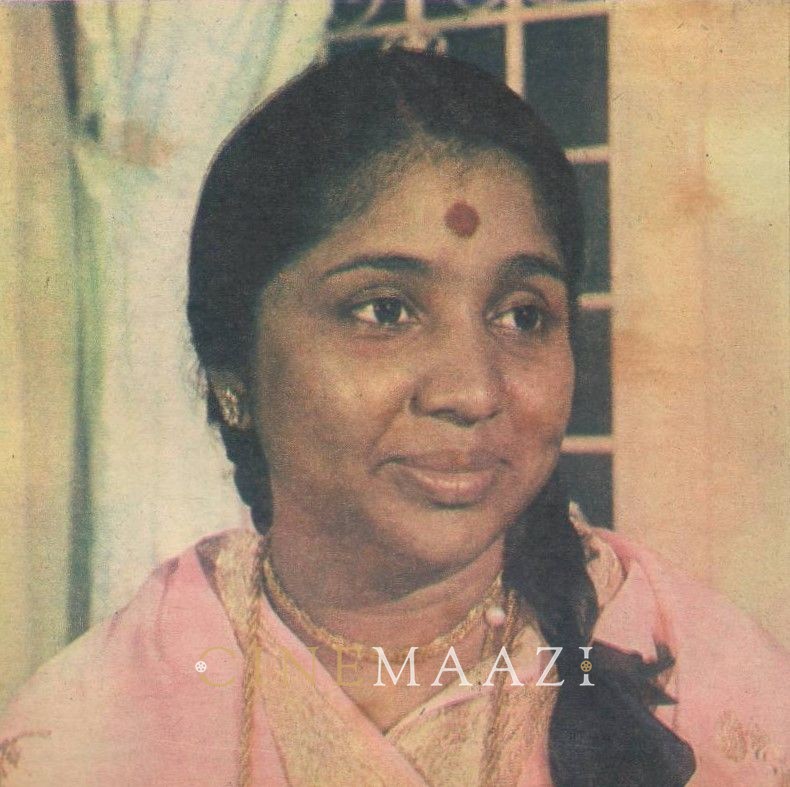