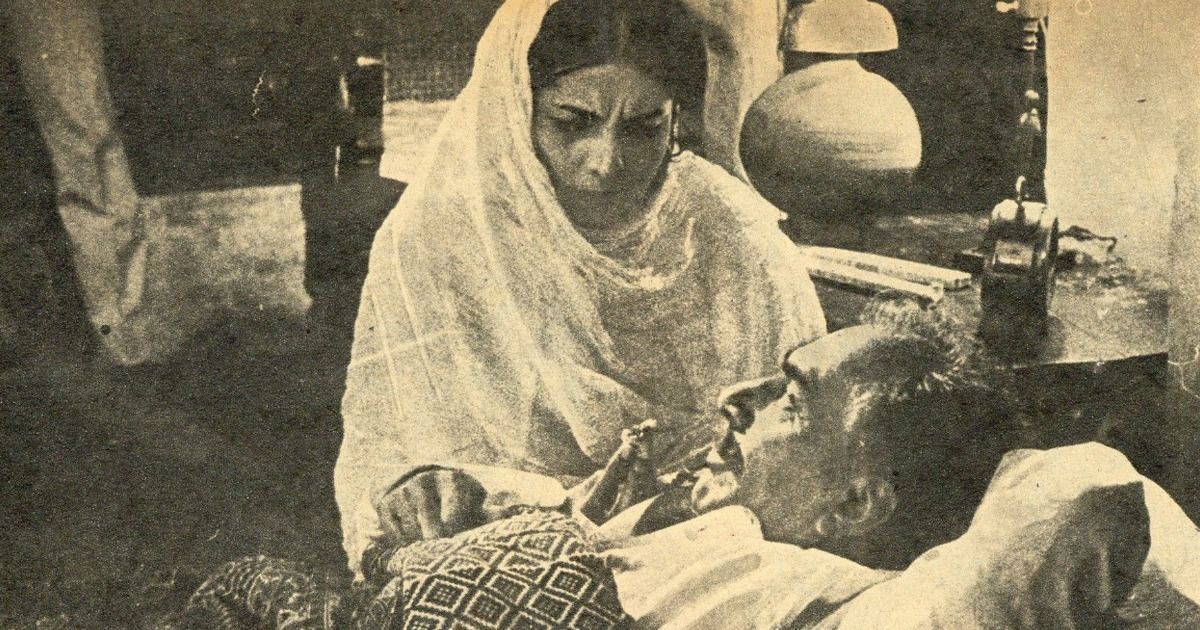 Garm Hawa has a special place in the history of Indian cinema. Told with simplicity and honesty, the film explores the conflict among Muslims who did not leave India after Partition. Elegantly deploying the inherent symbolism of the Taj Mahal and the Fatehpur Sikri in Agra, once the capital of undivided India, the film tells the story of the Mirza family.

Halim and Salim Mirza are brothers. Both, with their respective families, live in their ancestral haveli, with their mother, who is quite old. Halim is a leader of the Muslim League and also the legal owner of the haveli. Salim runs a shoe factory. Salim has two sons – Bakar and Sikandar. He also has a daughter Amina, who is in love with her first cousin, Halim’s son Qasim. Their relationship abruptly comes to an end when Halim leaves with his wife and son for Pakistan.

Qasim does come back with the intention of marrying Amina, but a few days before the wedding, he is arrested for not having proper documents to stay in India and forcibly sent back to Pakistan. He does not come back. Saddened by the cruel twist of fate, Amina does not give up hope. She accepts Shamshad, another first cousin (first-born of her father’s only sister) who had been pining for her for years, and hopes to marry him soon. This relationship too doesn’t culminate into marriage. Amina kills herself. Father Salim refuses to leave India despite his daughter’s death and the false accusations of spying for Pakistan leveled against him. The atmosphere of callousness and suspicion around him has no visible effect on Salim who believes that Gandhiji’s sacrifice will not go in vain and eventually everything will be all right.

Garm Hawa is often seen as a film that ended the long silence maintained by Indian filmmakers on the splitting of the subcontinent.
Produced with the help of the state-owned Film Finance Corporation, Garm Hawa was the first film that explored the painful and torturous consequences of Partition in a political context. MS Sathyu, who was very active in IPTA (Indian People’s Theatre Association) circles, was able to make the film within a shoestring budget by putting together a team of like-minded artists and technicians. The film is based on a story written by Ismat Chughtai. Kaifi Azmi and Shama Zaidi wrote the screenplay. Azmi also wrote a ghazal for the film, portions of which are heard during the first and last scenes of the film. Balraj Sahni plays Salim Mirza. The supporting cast includes AK Hangal and scores of local actors from the IPTA chapter in Agra. When it was released in 1973, Garm Hawa was instantly recognised as a film that did not conform, and sailed against the winds.

Satyajit Ray wrote about Garm Hawa: “In context of the contextually-void Indian cinema, Garm Hawa has done full justice to Ismat Chugtai’s work. The film, despite having a lot of other technical issues and aesthetic shortcomings, remains a milestone in the history of Indian cinema, purely on the basis of its subject. Yet, compared with the other films released in India in 1973, Garm Hawa can be called a small film that neither had any big stars acting in it nor a conventional masala plot.”

Doubtless, numerous films were made on Partition before Garm Hawa. But in none of them does one find the filmmaker scratching the surface of reality to find deeper, truer meaning. Although in films like Lahore (1949), Apna Desh (1949), Firdaus (1953), Nastik (1954), Chhaliya (1960), Amar Rahe Yeh Pyar (1961) and Dharmputra (1961) we encounter characters affected by Partition, we do not see anything more than vague references to the event and its fallout.

It is more than a decade later with works like Govind Nilhani’s Tamas and much later, Chandraprakash Dwivedi’s Pinjar that we saw stories about deaths and mass destruction that Partition had brought in its wake. In Pinjar, Dr Dwivedi’s fresh resolution to the emotional crisis of Paro is largely inspired by the original thinking of the work’s author Amrita Pritam. Anil Sharma’s Gadar (2000) is also set around the time of Partition but the film appears to be blinded by notions of nationalism. Without these exaggerations, perhaps the film could have been called a creative success to some extent.

Garm Hawa is often seen as a film that ended the long silence maintained by Indian filmmakers on the splitting of the subcontinent. The writers and director of the film explored the thinking, dilemma, perception of reality, and sociability of the average Muslim living in India. Our country is yet to fully recover from the post-independence socio-political horror. The havoc can be felt even today. To many, Partition was a consequence of the hurry and mistakes on the part of our political leaders at the time. In pursuit of power and ensuing clash of egos, Nehru and Jinnah gave little thought to lives of millions who were displaced, dispossessed and damaged forever. 66 years after independence, the pain of the affected men and women still stings our present. Animosity and mistrust have become part of our psychosis. Decades later the problems of India-Pakistan, now India-Pakistan-Bangladesh, have remained roughly the same. The seeds of these problems were sown during Partition.
The filmmakers before Garm Hawa never explored this failure of the political class, though there exists in literature a sensitive and realist portrayal of the trauma of Partition.
Based on our reasoning and belief systems we blame one or the other individual for Partition. Actually the real culprits were national leaders. In an interview with Leonard Mosli in 1960, Nehru said: “After years of fighting we were tired. Only a few of us would have agreed to a scenario where we could be jailed – a strong possibility if we fought for undivided India. Besides, we had all heard about deaths in Punjab. The plan for Partition gave us a way forward and we accepted it. We had hoped that Partition would be temporary and Pakistan will eventually join India.”

These words may sound perplexing today but they accurately articulate the prevalent viewpoint among the political class during that time. The filmmakers before Garm Hawa never explored this failure of the political class, though there exists in literature a sensitive and realist portrayal of the trauma of Partition. Unlike filmmakers, the writers in Hindi, Urdu and Bengali had made their views known: they rejected the two-nation theory. Time and again these writers brought to life on paper the pain and political neglect they saw all around them. Surprisingly none of these great writers ever found their work adapted for a film by a filmmaker.

Not only did Indian and Pakistani filmmakers stay away from the subject, international filmmakers also overlooked the colossal human tragedy. The inertia of the international film community that made scores of films on WWII and other international events is, to say the least, quite remarkable. In various television and newspaper interviews, Gulzar and Shyam Benegal have spoken about the indifference of the Hindi film industry towards Garm Hawa.

Ever since its release, a section of critics have consistently refused to consider the film as fair portrayal of the consequences of Partition. According to them the film makes no mention of the Hindus who stayed back in Pakistan. According to them the characters in the film are never seen criticizing their community for what happened. This incorrect and inconsistent reading of the film in the name of balanced depiction has led to marginalization of Garm Hawa in the sphere of public discourse. The film therefore did not spark the kind of debate and discussion it was expected to in the four decades since it was first released.

Garm Hawa impresses at many levels. The minute detailing stands out. Every character is well developed and has a motive and the way each of them move in their respective trajectories to tell the story is not just brilliant but is also an excellent example of how great stories can be transformed into greater screenplays.

The climax of Garm Hawa is both symbolic as well as political. Tired of the social opposition, Salim says: “People don’t cross paths with me. They get up and leave when they see me come in. People turn their faces away when they see me. There is a limit to everything. I now know that it is impossible to live in this country.”

Salim decides to go to Pakistan with his wife and son but Sikandar opposes him and says, “We should not leave India but stay here and fight for our rights with the common man.” Salim pays no attention to his son. The next day we see him at the Taj Mahal with moist eyes as if all his pain is flowing with his tears. Finally he sits in a tonga to go to the station with his wife and son. On the way they see a public demonstration. A slogan is heard: “India wants food, shelter and clothing.” Salim now accepts what his son had said earlier. Salim says: “Go on son, I won’t stop you. Man cannot live alone for long. I am also tired of this isolation. Take the tonga back….” Sending his wife back home on the Tonga, he too joins the demonstration with his son. Again Azmi’s voice is heard (translated below): 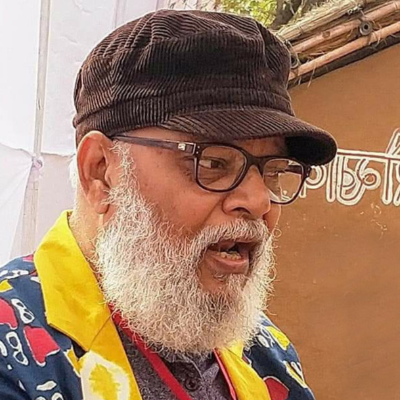 Other Articles by Ajay Brahmatmaj