Majrooh Sultanpuri: The Poet for all Reasons, Enlightening and entertaining 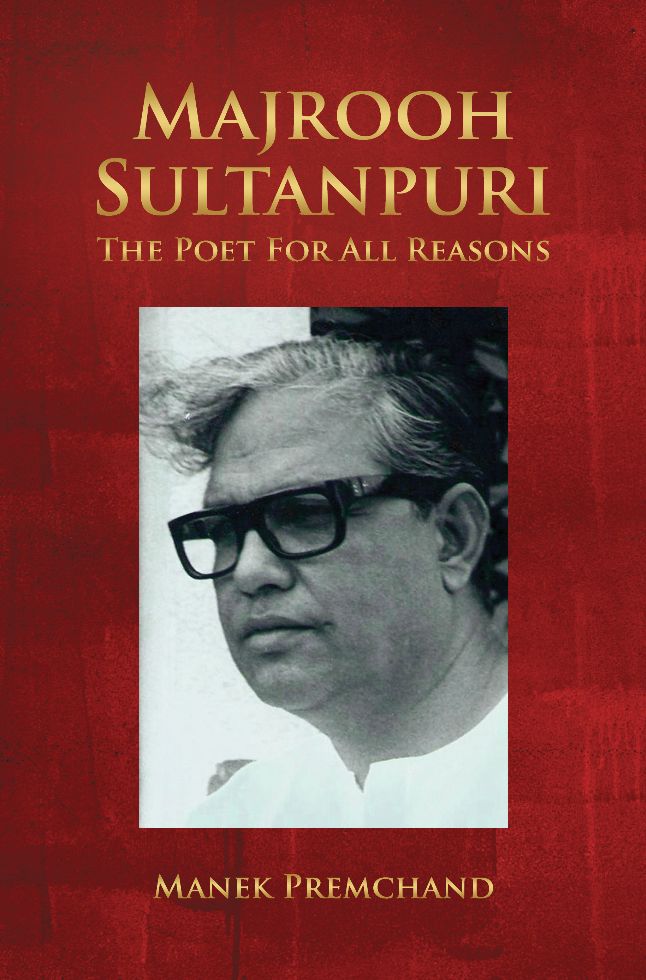 This book on Majrooh Sultanpuri - one of the prominent musical forces in Hindi films, lyricist in more than 2000 songs, [indeed a mind-bogglingly stunning repertoire!] - is a mammoth feat: meticulously written and edited, painstakingly researched, very enlightening and entertaining too. A joy forever.

Written by Manek Premchand, a music historian, who has authored many books of film music, including Yesterday’s Melodies, Today’s Memories, and biographies of Hemant Kumar and Talat Mahmood, it is indeed a collector’s item, embellished with some rare photographs, every chapter enriching the reader.
There are separate chapters penned by Antara Nanda Mondal, Deepa Buty, Madhur Trivedi, Vijay Kumar, Lata Jagtiani, Monica Kar, and Sundeep Pahwa, about Sultanpuri’s engagement with specific music composers.

In the preface, Manek Premchand writes, “They do like Majrooh’s poetry since that is an inseparable part of the songs they love so much. But there is sometimes this gap between his words and what many music lovers understand of them. Not just words, many people also miss out on the imagery the poet is trying to offer. This book mainly attempts to list Majrooh’s film work and bridge the gap between his poems and our understanding of the same.”

The various chapters deal with his thoughts that ‘ranged from the mildly sensual to the openly sexual’, his engagement with politicians,  and the world of lullabies — Majrooh had penned some of the most soothing and haunting lullabies for films, the most famous being, Nanhi kali soney chali [Sujata, 1959].

Born on 1 October, 1919, at Azamgarh, he was named Asrar ul Hassan Khan, but later took the takhaluss, Majrooh [the wounded,] pursued unani medicine, but found his passion in poetry and went to Bombay in 1945 for participation in a couple of mushairas. His film career began in 1946, and he spent the rest of his life there, breathing his last on 24 May, 2000.  A family man, fond of fishing, hunting, playing cards, and going out on picnics and vacations with his family,  he was a great host, who loved throwing parties. Everyone was a fan of his wife’s cooking.

He left behind a monumental legacy, also having won the Dada Saheb Phalke Award for Lifetime achievement in 1993.

Indeed, he started his journey alone, but along the way, many friends and collaborators jumped onto the musical-lyrical bandwagon, and the size of the caravan kept increasing. In the course of his journey, he met many geniuses and, in some very well-researched chapters, their collaborations have been discussed.

Deepa Buty, founder of TheSongPedia.com, an online music magazine, in her essay, Majrooh Sulatnpuri and R D Burman – Jag Mein Reh Jayengey Pyarey Terey Bol says that “Majrooh Sulatnpuri was an unstoppable soul. Through his poems, he found an aesthetic outlet of his thoughts and political beliefs and he balanced the other side by writing film songs. His poetry touched the hearts of simple music lovers and aesthetes alike.” [p 303]  Majrooh’s camaraderie with the Burmans was legendary, and between the three of them, they produced some of the best albums of their careers.

“An extravagant serving of lyrics from this gourmet, cutting and folding words to the tunes of Pancham. Be it a solemn, Tumney mujhey dekha hokar meherbaan, or the soulfully romantic O hansini, or the frothy Yeh ladka hai Allah, his recipes too like Pancham’s were never repeated, and yet people savoured them song after song.”[p 313]

In The Delightful Duo – O P Nayyar and Majrooh Sultanpuri, [PP 314- 325], Lata Jagtiani, a prolific writer of more than eight books, says, “Enraptured by their songs, listeners have gasped at the adroit sleight of hand of these two wizards. Whether the song was sombre or romantic, whether it was frivolously comic, or seriously philosophical, or whether it was a peppy ghoda gadi song, or a soul-stirring ghazal, we fell hopelessly in love with it.”[p 314]

In Majrooh-Chitragupt— Jodi Hamari Jamegi Kaise Jaani? [pp 338- 351]  Monica Kar, a freelance editor, living in Charles, Missouri, USA, writes that the Majrooh-Chitragupt partnership started with Zimbo, Teesri Gali and Taxi Stand released the same year [1958], and it was their spiritual wavelength that kept them together.

In The Nasir Hussain-Majrooh Sultanpuri Connection, [pp 352- 358] — film and music enthusiast, Sundeep Pahwa describes the collaboration between the two greats, emphasising the fact that Nasir Hussain was one of the main members of Majrooh’s creative caravan. Pahwa enlightens us about some of their films and some significant songs from them.

In the chapter, Roshan and Majrooh, Vijay Kumar, whose familial milieu had songs and music for every occasion, saw his music sensitisation mutating into a love for Hindi films. He talks about the Roshan-Majrooh synergy, making a special mention of two films, Aarti and Mamta, which, ‘significantly owed their greatness to the collaborative work of Majrooh and Roshan.  Majrooh’s words found an affinity for the music of Roshan.’

The chapter on ghazals penned in meticulous detail by Manek Premchand left me highly enriched.

This book is an effort at demystifying a great deal of Majrooh’s output, and a precious gift for all music lovers, especially unabashed admirers of Majrooh Sultanpuri’s poetry. Not a mean feat, because he was undoubtedly a genius who wrote romantic songs, sad ones, lullabies and qawallis and mujras too, offering his shoulders to many singers to sing their first songs, many composers debuting with his lyrics.  Neither conceited nor narcissistic, he did not like it when anyone interfered with his choice of words or imagery.

I really enjoyed the interview conducted by Manek Premchand with Majrooh Sultanpuri’s son, Andalib. It left me with wonderful images of the happy household which was frequented by the likes of Lata Mangeshkar, Raj Singh Durgapur, the entire Mangeshkar clan, Rahul Dev Burman, Rishi Kapoor, and Raj Kapoor, amongst many others. We get a whiff of those good old times when the family spent many a happy, musical evening in their rambling lawns from the chapter, Abba ka spine hamesha seedha raha. [pp 388-400]. We also get a peep into the sort of person he was — a loving father, who expected a hug from his kids, but did not choke them with their love, a loving husband, who took his wife, Firdaus along with him to cultural meets abroad,  a Sufi at heart, who lived a King’s life without having a King’s resources, never greedy and ‘happy with whatever he got’.

Manek Premchand has indeed done a commendable job of throwing light on the huge corpus of work, his ghazals and lullabies showcased under different headings. An intriguing fact that I came to know by reading the book was that Majrooh was extremely fond of his youngest daughter, Saba, and the iconic lullaby, which almost every mother has sung to her offspring, Nanhi kali soney chali was written by him for his daughter, as her mother was finding it difficult to put her to sleep.

In his interaction with Manek Premchand, Raju, his son-in-law, son of Naushad and husband of Saba, his youngest daughter of whom he was very fond, we come to know that the following mukhda from Saathi was also written with Saba in mind.
“Yeh kaun aaya roshan ho gayi mehfil kiskey naam sey.

In the Preface, Manek Premchand writes, “I hope you will find something of value in these pages.” It goes without saying that in this book, the reader finds a lot that is valuable, not just interesting vignettes from his life, but a lot of intellectually stimulating discussions on his poetry, the underlying myriad nuances, his various collaborative ventures, his friendships and his political leanings.

We find that there were two Majroohs perennially in conflict with each other – Majrooh, the literary poet and Majrooh, the filmi geetkar.

Ali Sardar Jaffry, his close friend, had this to say about him: “Pablo Neruda, when he visited India in 1950, greeted me with the words, ‘younger brother in poetry and struggle’. I pay my tributes to Majrooh in the same words.”  [p 552]  “His soul belonged to the entire humanity,” Jaffry sahab added.

This was also Majrooh Sultanpuri, a sensitive humanist to the core.

The Publishers, Blue Pencil, Manek Premchand and the coauthors who wrote their insightful pieces on him deserve great praise for this wonderful book — a book highly recommended for the lovers of Hindi film music and especially for diehard fans of Majrooh’s poetry.
34 views 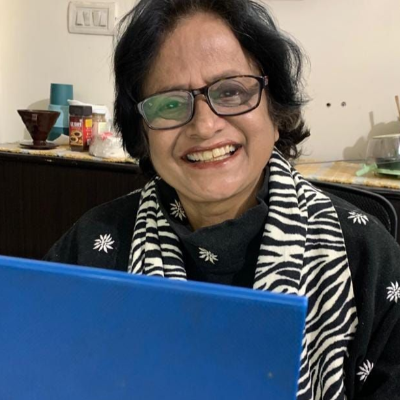 Critically acclaimed for her poetic biography of Mahatma Gandhi, Ballad of Bapu [Vitasta, 2015],
Dr. Santosh Bakaya is an academic, poet, novelist, essayist, TEDx speaker, biographer, and critic,
with more than twenty published books cutting across different genres.
The recipient of the International Reuel Award for literature for her long poem, Oh Hark! [2014],
Setu international Award, 2018, [Pittsburgh, USA] 'in recognition of a stellar contribution to world literature,'
her TEDx Talk on The Myth of Writer's Block is popular in creative writing classes.
She runs a popular column, Morning Meanderings in Learning and Creativity website,
which is now an e-book. [Blue Pencil, 2020]

Her e-books, Vodka by the Volga, with Dr. Ampat Koshy,
and From Prinsep Ghat to Peer Panjal with Gopal Lahiri [Blue Pencil] are amazon bestsellers.
Runcible Spoons and Pea-green Boats is her latest book [Authors Press, 2021]