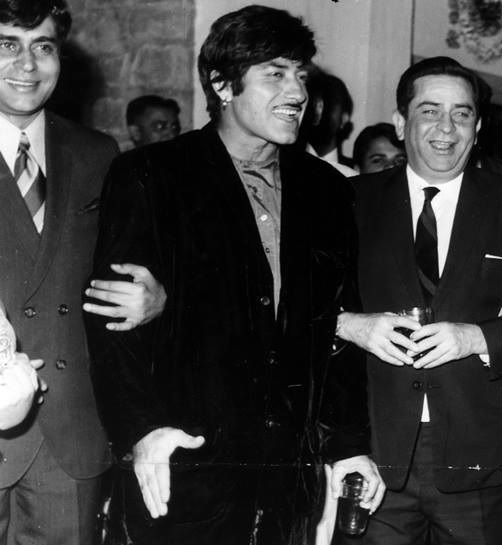 The three stars- Rajendra Kumar, Raaj Kumar, and Raj Kapoor - in one frame from a social gathering back in the day. Image Courtesy: Pinterest

Actually, there is no reason whatsoever why one should write about these three actors together, because probably the only thing they have in common is a similarity of first names. So probably do a million anonymous men all over India.

Two of the three sport a Clark Gable moustache and the third who doesn't is more averse to donning one for a screen role than one of the other two is to shaving it off when the role demands.

They have all sorts of idiosyncrasies, eccentricities, mannerisms and behaviour-patterns, both on and off the screen. Two at least, of the three of them, are enormous egotists while the third with refreshing and most unstar-like candour, keeps his feet on terra firma by reminding himself and others—that "Allah Mehrabaan to gadha pehlwan!"

The sizable fan-following which Raaj Kumar has developed indicates that the cine-fans of today are less amenable to having their screen idols cast in the standard mould of the screen-hero than before. Raaj Kumar does not fit the standard mould of the conventional hero. He is rugged, not soft. He prefers a characterisation rather than a moony lover's role. In his own way, he has made a science out of his art, calculating for — and getting — effects and responses from his audience in exactly the desired manner.

The strange thing about Raaj Kumar is that, unlike the other two, film or stage was never a part of his early life. He was born at Lorallai, Baluchistan, the son of an army officer in a large family of nine children. He studied there, later at Rawalpindi, and after that at Lahore, where he graduated with Honours in English.

Raaj Kumar's background is as rugged as his features. His family originated in Kashmir and had its roots at the Frontier. This background is indelibly stamped in his personality and reflected in the nature of the work he took up before he became an actor. Raaj Kumar was a police officer before films claimed him.

Both Raaj Kumar and Rajendra Kumar had a dull run-in in films before the late Mehboob Saheb claimed them both for the cast of  Mother India. For both, this film was the big spring-board for a fast sprint to success. After that, neither have looked back. The two actors who rubbed shoulders in Mother India met again on the same screen in Sridhar's Dil Ek Mandir (1963) which, Raaj Kumar says, he signed on a hunch without discussing the financial terms. This was unusual for an actor who is extra-ordinarily choosey about the roles he accepts. But the hunch paid off. Dil Ek Mandir was another feather in Raaj Kumar's histrionic cap.

From here, the histrionic paths of both Raaj Kumar and Rajendra Kumar go off at sharp tangents and so do their career-graphs. Immersing himself more and more in perfecting his work, Raaj Kumar made of Waqt (1965), Kajaal (1965), Oonche Log (1965) and Rishte Naate (1965) his personal histrionic triumphs. While doing this he also retired from the sort of limelight which Raj Kapoor and Rajendra Kumar made it a point almost constantly to enjoy. Unlike these two, who have striven to become national figures almost simultaneously with fine artistes so that the stature of the film industry as a whole be raised to a national, socially significant stature, Raaj Kumar shuns the public platform.

It would not be wholly true to call Raaj Kumar a recluse, for, if he complains to his diary about being left alone (he finds writing a satisfying personal experience), he can also "kick it up" and mix freely at the gayest floor-shows in town. In total contrast to this, both Raj Kapoor and Rajendra Kumar never patronise either the clubs or the floor-shows. His regular morning game of tennis is the only pastime Rajendra Kumar permits himself and that too is strictly in the line of duty, as it were. It helps him feel fit and fresh, for this dedicated actor knows that the star's face and figure are his fortunes.

Always maintaining the delicate balance between the actor and the star for himself can sometimes lead to amusing, though not wholly irrelevant, decisions. One such decision Rajendra had to face when Suraj (1966) was begun. A swashbuckling, action-thriller, its hero was visualised as a dashing young man with a Douglas Fairbanks moustache. Rajendra wore it only to take a look at himself in the initial stills, then decided his fans wouldn't care for him in it, and did the film without a moutache! On the other hand, however, for Asif's Sasta Khoon Mehnga Pani (1970) his fans will have to put up with a moustached Rajendra!

Probably the star was convinced that the actor would be better off with the hirsute adornment, for which Madhya Pradesh dacoit is clean-shaven? Talking of moustaches, it is a moot point whether Raj Kapoor would shave off his precious facial adornment for anybody's film, but for certain portions of Mera Naam Joker (1970) he has done exactly that!

On screen too, the acting styles of all three actors are sharply distinctive. Unkind critics have said of all three that they are personality actors, that is, to put it bluntly, stars. Or, in other words, those actors play themselves in every film. This is not though strictly true for, though Raj Kapoor, for example, has made of the lovable tramp with the heart-of-gold his personal stock-in-trade, the infinite shades and variety in his performance belie the star-stamp. He is more than just a star. He is a legend, a national image, the man who symbolises young India in many European and Eastern lands.

In the case of Raaj Kumar, the very pursuit of becoming a non-star has made him a star! Obstinately preferring controversial characterisations rather than goody-goody lover-boy roles, Raaj Kumar has given such a great deal of thought and dedication to his work as to almost develop a controversial reputation. But there is a mathematical precision behind every gesture, expression, movement or non-movement he makes on screen, indicating that every performance of his is a carefully thought-out one.
The proof of Rajendra Kumar's efforts at constantly maintaining for himself the fine balance between actor and star and how well he succeeds in this lies in the number of "Silver Jubilee" films he has to his credit. Probably no other star can boast of a greater number of hit-films. To achieve this, he concentrates on affairs only allied to the role and the performance. He will be selective about his set-up: the producer, director, music-directors, costumes and so on. He will look into the publicity, have a say in what theatres to release the finished product, and so forth. It is this shrewdness of judgement that has helped Rajendra's career so that he can be more eager to play a guest role in a Raj Kapoor film in preference to a lead in many another, which is exactly what he is doing in Mera Naam Joker.

Thus, each in his own unique way, has built up a personalised brand-image of himself. Of course, the fact that Raj Kapoor has had a head-start of many years over the other two, plus the fact that he is also a film-maker of fabulous dimensions, give him a totally different aura from the other two. But Rajendra and Raaj Kumar too, have an aura of their own.

So here are three Rajs - all totally unlike each other. If one is to find anything in common between them, it is perhaps the fact that all three of them together form fifty percent of the best actors on the Indian screen!

This article was originally published in Star & Style's 1 May 1967 issue. The images used are taken from the Cinemaazi archive and the internet. They were not part of the original article.
1173 views