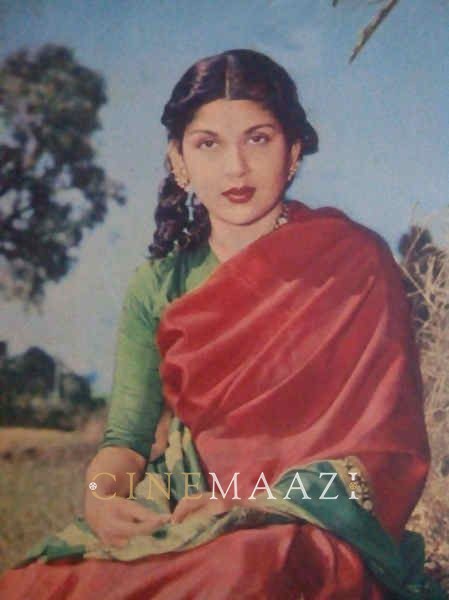 The doctor’s daughter wanted to become a lawyer. “I love to argue, and talking is my favourite pastime,” said Vijaylaxmi in that beautifully-modulated voice of hers, which along with her sad, expressive eyes is her greatest asset.

Born Kamla Verma, in a tiny, unpublicized town called Nagina, in Uttar Pradesh, the twenty-five-year-old Vijayalakshmi left her birthplace when only five months old. She did her schooling in Mussoorie, where she was a boarder, her parents’ home being in Kotah. The war scare made her parents recall her while she was doing her Junior Cambridge, and she eventually matriculated from Delhi. Both her parents being doctors (her father an eminent surgeon), Vijayalakshmi naturally drifted to the study of science in college at Agra, although she admits to being indifferent where the medical profession was concerned. After the Inter-Science examination, she was found to be underage for entrance to the medical college. So she did a third-year course in science and during this period was “discovered” for films.

At the time when she had expressed a wish to take up law, her father had objected to it on the ground that it was too venturesome a profession for a girl. “Little did he, or anyone else, imagine that I would someday be entering a much more daring profession!” said Vijayalaxmi.

She had never even dreamt of joining the films, but the urge to act was within her and it found its outlet in college dramas and debates. In 1947, while still at college, Vijayalaxmi was offered a contract by a film company. Taken with the idea of becoming a film star, she told her parents about it. Her father objected strongly (he still hasn’t reconciled himself to his daughter’s choice of profession), but her other stood by the little girl. “My mother has a habit of giving in to me on most occasions,” said Vijayalaxmi with a grateful smile. “And it was she who signed the contract on my behalf because I was still underage.”

Vijayalakshmi came to Bombay, with a contract to work exclusively for the film company which had engaged her. Unfortunately, the film was never completed. But while she was in Bombay, Kamal Amrohi spotted her talent and invited her to work in Mahal (1949) which he was making for Bombay Talkies. Then she went back to her home in Kotah, later to come back with her aunt to settle in Bombay – her mother being unable to accompany her because of her medical practice.

The trouble with film stars is that they are always in danger of becoming typed in certain kinds of roles. I have found that being educated can be quite a handicap to an actress. If you’re educated, producers take it for granted that you’re sophisticated. And, if you are sophisticated, they feel you must be made to play the vamp!”

Vijayalaxmi is quite prepared and willing to play all kinds of roles, but she has a preference for tragedy or an outright light musical comedy. That is why she liked her roles in Gauhar and Bahu Beti. “My role in Mahal was good, too, but I was inexperienced and raw at the time and I sometimes wish I could do it all over again,” she said.

Vijayalaxmi doesn’t really mind playing “the other woman,” but it is her contention that really good seductive roles are not forthcoming in Indian films. Besides, she feels that critics and audiences alike have liked her more in her “good girl” roles. In Aah she once again played “the other woman.” “But that is because I have a great regard for Raj Kapoor,” she adds.

Listing her other preferences, Vijayalaxmi says that Nargis and Geeta Bali are her favourite stars, while she considers Ashok Kumar to be an outstanding actor. She has worked with both Ashok and Raj Kapoor and would like some day to be co-starred with Dilip Kumar. “But don’t get me wrong,” she hastens to explain. “I would like to work with as many actors as possible and gain all the experience I can.”

She thinks Bimal Roy and Mahesh Kaul are the best directors and hopes one day to work under them. “Raj, of course, is highly talented and any actress would profit greatly by working with him,” she said.

Frank and outspoken, Vijayalaxmi is of the opinion that the film industry is no place for a girl to be entirely on her own, especially in matters of business. Now that her mother has retired and has joined her in Bombay, she consults her mother about her contracts.

Confessing to being temperamental and erratically moody, the lovely Vijayalaxmi says, “I love talking and can hold forth for hours on any subject, but there are times when I just clamp up and nobody can get a word out of me. It is so with my reading. There are times when I read heavy literature for months on end. Then suddenly I switch over to ‘cheap’ stuff and penny novels.” She likes to cook but admits that cooking palls on her when it comes as a responsibility.

Recently, Vijayalaxmi entered into matrimony – with unfortunate results. Speaking frankly about her hasty marriage and her divorce, she said with head held high, “I am not ashamed of it.” And it seems to be with her a case of “once bitten, twice shy,” for Vijayalakshmi says she won’t soon think of marriage again.

“I have no intention of getting married, either now or in the near future,” she declared with determination. This lovely, charming and very intelligent star is concentrating fiercely on her career. In a couple of years or so, she hopes to produce her own films. “I have, as an artist, seen so many things,” is what she says about her plans. “I feel that, as a producer, I may be able to avoid the pitfalls so obvious to me. “I do not say that my films will be greater than any made, but at least I shall make every attempt to do things in a proper way.”

Cinemaazi thanks Sudarshan Talwar and Cineplot for contributing this interview conducted in February of 1955.
Posters of films are taken from Cinemaazi archive and were not part of the original article.
1233 views