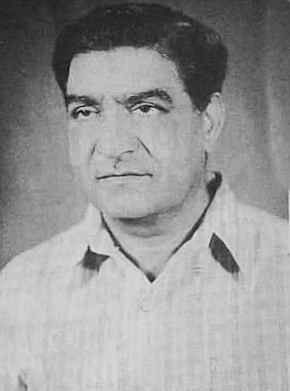 This song sung by Mohammed Rafi and Asha Bhosle is still played in radio. Other songs from the same film –

And the theme song of the Film —

You might be surprised to know that the popular song from Roti Kapda Aur Makaan (1974) Teri Do Takiya De Naukri was composed by this composer for the Punjabi film Mama Ji (1964) – Teri Do Takiya Di Naukri Oh Mera Laakhon Da Saawan Jaandha. There are innumerable cases when the same has happened. Mama Ji was a hit Film of S. Madan which had some other hit songs also :

This song created a ruckus in Bhatinda. One day the film was running in theatres and two drunkards went there. When the song was performed on screen by Bela Bose, the drunkards created a commotion stating that Bela Bose be removed from the film. She is taking the name of our enemy. If you aren’t taking her out from the film then tell her not to take the name of our enemy. If he wants ‘Juthi’, we can give a garland of ‘juthi’, how much ‘juthi’ does he want? At that time the manager came over there and told them that we have told her (Bela Bose) not to take the name of your enemy from tomorrow onwards and then they settled down on their seats.

Anyway, the composer of Batwara and Mama Ji, S. Madan was born on 7th May 1922 in Monga. During School days while reciting the prayers, S. Madan developed an interest in music. After school, during the college days he started taking part in dramas and also started to win awards not in academics but for his songs as his interest was more in music than in academics. He also started musical training under Ustad Nazir Khan Saheb to improve his talent in 1938. At that time the Lahore Film Industry was at its zenith. To try his luck, Madan used to visit Lahore from time to time. But his family didn’t let him stay there. When the partition happened half of the Lahore Film Industry shifted to Bombay and S. Madan made Bombay his place of residence.

Song writer and Scriptwriter Aziz Kashmiri made him an assistant in Lahore under music director Vinod in 1942. And as an assistant to Vinod, he composed music for films such as Ek Thi Ladki (1949),Ramman (1954), Wafaa (1950), and Sabz Baagh (1951). When Vinod passed away, S. Madan worked as an assistant to Aziz Hindi for films such as Danka (1969). During those days when Pradeep Kumar and Deep Khosla were involved in the making of the Film Police (1958), Deep Khosla met S. Madan. When Deep Khosla heard the tunes composed by S. Madan, he liked them very much and gave him a chance in Batwara. Although the songs for the Deep-Pradeep film Batwara became a hit but the film didn’t. Therefore, the Hindi film industry wasn’t convinced with S. Madan’s capabilities.

At the same time a well-known figure in Punjab, Hakim Lal Singh stepped into the production field of Punjab film industry. And he went directly to S. Madan as they both knew each other. The music of film Batwara was playing on streets all over the country. Hakim Lal Singh requested S. Madan to give music for his first Punjabi film Laado Rani (1963) S. Madan wasn’t willing to give music as he thought that if he started giving music in Punjabi films, he would be typecast in Punjab films and would lose opportunities in Hindi film industry. But at the same time, he didn’t want to ruin his relations with Hakim Lal Singh and composed the music for the film. Unfortunately, his worst fears came true. After the success of Laado Rani and Mama Ji, S. Madan became popular in Punjab in every nook and corner and S. Madan was labelled as the composer of Punjabi Films.

Some more Punjabi films to his credit include Sath Saliyaan, Pibaara, Dharthi Veera Di, Khaid Preetha De, Dulha Bhatti, Laiye Thod Nibhaiye, etc. After Batwara, S. Madan got two more Hindi films, but they never went past Muhurat. Mohan Ji Sulibhau, an assistant to Karunesh Kumar, the director of Batwara and Sath Saaliyan was very impressed by the music given by S. Madan in both films and promised S. Madan that if he became a director he would give S. Madan a chance. He fulfilled the promise with the film Sher Khan (1962). S. Madan also composed music of Hindi film Teesri Aankh (1982).

Talking about the composers of today and yesterday S. Madan remarks :

‘Those people (the composers of the old times) used to give importance to melody. It was the time when the hero used to sing his own songs, but still their songs used to get popular. That is the reason that even now Late Saigal’s songs bring in 800 Rupees per month as royalty. At that time, melody was the queen and noise in the name of the orchestra was kept to minimum. In one of my own Films Dharthi Veera Di there was a song Chande Mathe Daagh Ubar Dey Suraj Mathe Shaahiyaan, Dil Da Chehda Suna Sakhna, Bad Bad Kaan Judaaiyaan Dun Tha Aa Jaani had only eight instruments. Four Violins and Dholak, Taar, Shehnaai, Flute and Clarinet.’

Some more hit songs of S. Madan are :

The music of S. Madan can be heard in films other than the Hindi ones including Punjabi Films as Jai Mata Shera Waali (197), Sau Tere Pyar Di and Haryanvi Film Dahej.

Cinemaazi thanks Sudarshan Talwar and Cineplot for contributing this article. It was originally translated from Hindi by Ramaswamy Narayanan.
The poster of Batwara is taken from Cinemaazi archive and was not part of the original article
380 views