Suman Kalyanpur, a shy girl with a delicate voice as sweet as honey, carved a secure niche for herself as a singer with her sonorous voice and accurate use of vocal octaves. Her melodious singing of Dil Gham Se Jal Raha (Shama), Mere Mehboob Na Ja (Noormahal) and Haal-e-Dil Unko Sunana Tha (Fariyad) remind us of an era when songs were sublime and filled with purity. She has a mild tremolo in her voice which made her singing enchanting. Her skills and tastes leaned towards soft, melody-based numbers. She never sang cabarets, mujras or suggestive songs. She had a special knack for folk-based songs. It is sad that a singer with such enormous talent did not get her due - probably due to her uncanny similarity to Lata’s voice. Despite a relatively limited repertoire she has given some evergreen nuggets and she shines in her own light.

Suman Kalyanpur was born Suman Hemadey on 28th January, 1937 in Kolkata. Her father Shankar Rao Hemadi was an elite Saraswat Brahmin from Hemadi village (Udupi district) Karnataka. He held a high position in the Central Bank of India and spent a long time in Dhaka. Suman was the eldest of five sisters and a brother. Her family came to Mumbai during World War II. Everyone in the family was inclined towards art and music, but there was a ban on singing in public. Suman sang for the first time at a neighbouring Ganpati Mahotsav. After completing her schooling from Mumbai's famous St. Columbia High School, she joined Sir JJ School of Arts for further studies.

She received training in light music from Yashwant Deo. During the same time, she learnt the basics of music from Keshavrao Bhole of Prabhat. Later, she learnt nuances of classical music from Tawde Bua, Professor Navrang and Khan Sahib Abdul Rehman. Once Talat Mahmood listened to Suman in a musical concert. Highly impressed, he recommended her to HMV. However, the company found her voice “amateurish”. In 1952, she got the opportunity to sing on All India Radio. During her performance at a cultural programme, a relative of the Bholes, D.B. Jog was impressed and offered her a Marathi film called Shauchi Chandni. But the film never took off.

Music director Mohammed Shafi, impressed by her songs in Shauchi Chandni, got Suman Kalyanpur to record three songs for Sheikh Mukhtiar’s film Mangu (1954). However, midway through the film, Shafi was replaced with O. P. Nayyar. He retained just one song of hers, a lullaby Koi Pukare Dhire Se Tujhe, which couldn't be removed as it occurs repeatedly in the film. What an irony! Earlier, along with another music director, Roshan was replaced by O.P. Nayyar. Shortly thereafter, Suman rendered five songs including a duet with Talat Mehmood Ek Dil Do Hain Talabgaarunder Naushad's music direction for the film Darwaza (1954), produced by Ismat Chughtai and directed by Shahid Lateef. This film was released earlier so it is generally considered to be Suman Kalyanpur's first film. Later, she got the opportunity to collaborate with Rafi and Geeta in the hit song Mohabbat Kar Lo Ji Bhar Lo(Aar Paar, 1954), the only song rendered by her under the music direction of O.P. Nayyar. She waited until her big break came through later the same year, with Miss Bombay (1957). She had the first of her memorable duets with Mohammad Rafi - Din Ho Ya Raat.

Now Suman Kalyanpur had the opportunity to work with all the top composers including Roshan, Naushad, S.D. Burman, Madan Mohan, Chitragupta, Shankar-Jaikishan, Ghulam Mohammad, Pt. Shivram, Hemant Kumar, S. N. Tripathi, Dattaram, Khayyam, Kalyanji-Anandji, and Laxmikant-Pyarelal who had their own individual style. Shanker Jaikishan was her perennial favourite while Laxmikant Pyarelal experimented well with her voice. She sang the most for Usha Khanna for over 100 songs. She gave an effective female dimension to Na Tum Hamein Jano (Baat Ek Raat Ki), despite few music accompanists used by S.D. Burman at the time of its recording. This beautiful and wistful number became a super hit and the rest is history.

Suman Kalyanpur has sung with all the male and female singers of the Golden Era. Her voice had all the major factors like coordination, the balance of voices and ability to complement with each other. During the 60s, she balanced her singing with stalwart singers like the classic Manna De, the golden-voiced Hemant Kumar and the nasally rich Mukesh. Suman was considered lucky for duets and her co-singers ranged from Mohammed Rafi and Talat Mehmood to Mukesh, Manna Dey and Kishore Kumar. She has a large number of duets in which she added something distinct, beautiful and everlasting. While many of her duets with Mohammed Rafi are breezy in Shankar Jaikishan or Laxmikant Pyarelal style, there are several others which are soulful and melodious. She had sung almost 170 duets with Rafi most of which became super hits. The song Ajahu Na Aaye Balma (Saanjh Aur Sawera), showed the compatibility of Rafi with Suman Kalyanpur in classical songs. Dil-e-Betaab Ko Seene Se Lagana Hoga (Palki), had the ghazal andaz embedded therein. Madan Mohan’s composition Baad Muddat Se Ye Ghari (Jahanara) sung by Rafi and Suman stunned many listeners of ghazals. Suman had adapted her style of singing which suited the songs of the Mughal period. Her duets with Mukesh are of rare beauty. She sang duets with many female singers as well, from Lata Mangeshkar to Krishna Kalle, many of which are iconic.

However, Suman Kalyanur remained in the shadow of Lata Mangeshkar because of her uncanny similarity to Lata’s voice and singing style. Yet there are several songs which bear her special imprint. Some of the songs came her way fortuitously because of a rift between Rafi and Lata. But that was a minuscule benefit in her truly illustrious career. The upbeat structure of the popular song Na Na Karte Pyar (Jab Jab Phool Khile, 1965), which incorporated a unique theka on the dholak, was markedly different from the intricate, raga-based songs. Suman’s well-known duet Aaj Kal Tere Mere Pyaar Ke Charche (Brahmachari, 1968), met the same fate. Even many Lata acolytes couldn’t make out the difference. This quality enabled her to render a number of romantic duets with several male singers.

Punjabi music directors like S. Mohinder, Hans Raj Behl, Sardul Kwatra and S. Madan etc. gave Suman Kalyanpur opportunities to sing in Hindi films. They also used her melodious voice in Punjabi films. Suman has rendered 65 songs in 33 Punjabi films from 1960 to 1977. During the peak of her singing career, Suman was also the favourite of Punjabi movie makers. In 1960, she entered the Punjabi film music arena when she was roped in by music director SardulKwatra to sing two songs in his home production HeerSyal. Both the songs Ukkad Dukkad.. Chicho Cheech Ganeriyan and Been Kahnu Sajna Vajana Aein became instantly popular. The following year, Sardul Kwatra recorded the most popular song Raatan Ne Hanerian Chann Maithon Doorin the voice of Suman for the film Billo (1961). In the same year, she gave playback in three more Punjabi films - Guddi (Kise Di Tute Rabba), Jatti (Baithi La Ke Udeekan, Ambi Da Boota) and Jeeja Ji (Main Kundal Waliyan Zulfan). All these songs were musical chartbusters and Suman Kalyanpur became a household name on both sides of the border.

Suman’s first song in Marathi Bhaatuklichaa Khel Maandila for the film Pasant Aahe Mulgi was a super-hit. Putra Vhawa Aisaa, Ekti, Manini and Annapoorna were her other memorable Marathi movies. Her hits are legion and include over 50 timeless gems of Marathi films, Bhavgeet and Bhaktigeet. Later, Suman worked on various albums. She sang Ashtavinayak, a Marathi album; an album of Sant Tukaram’s abhang and albums like He Govind He Gopal, Te Sur Aikataa and Kaise Karu Dhyan.

While sharing her memories, she reminisced, “I was 16 when I went into the recording room. I was asked to stand on a foot-high stool to sing. I was wondering why and how I could do that. I was nervous but Hemant Kumar had such kind words of appreciation and encouraged me to sing. Lata Mangeshkar was also present in the recordist room. On one hand, I was excited to be in the presence of such stalwarts and on the other I was nervous.” Among the many milestone songs from career, she recalls her best as Mere Preet Mera Pyaar (Teerth Yatra, 1958), Juhi Ki Kali Meri Ladli (Dil Ek Mandir, 1963), Na Na Karte Pyar’(Jab Jab Phool Khile, 1965), Aj Hun Na Balma (Sanjh Aur Savera), Aaj Kal Tere Mere Pyar Ke Charche (Brahmachari, 1968) and Mere Mehmoob Na Ja (Noor Mahal).

Suman married Ramanand Kalyanpur,a Mumbai-based businessman in 1958. After her marriage, her husband accompanied her to every recording session. She wasn’t good at negotiating contracts, so he handled all her financial matters. She never attended premieres or socialised with her colleagues. Her sister Shyama Chittar sang in films like Purab Aur Paschim (1970) and Shor (1972) etc.

Suman Kalyanpurwas one of the first female playback singers to represent India and perform in the US and West Indies. She did her riyaaz regularly. T-Series released Sunehri Yaadein, a re-recorded two-volume pack of her film hits in 1997. Kalyanpur is no old-fashioned puritan but favours technological advances. But she is against the remix concept. Mangala Khadilkar has written a book ‘Suman Sugandh’ about the story of her life. Suman’s interests include painting, embroidery, flower arrangement and gardening.

On three occasions she was awarded the prestigious Sur Sringar Samsad award. In 2010, she was awarded the prestigious Lata Mangeshkar Award for 2009 by Government of Maharashtra. In 2017 the Madhya Pradesh government also honoured her with the Lata Mangeshkar award. She was nominated for the Filmfare Best Female Playback Award in 1975 for the song Behena Ne Bhai Ki Kalai Main (Resham Ki Dori). 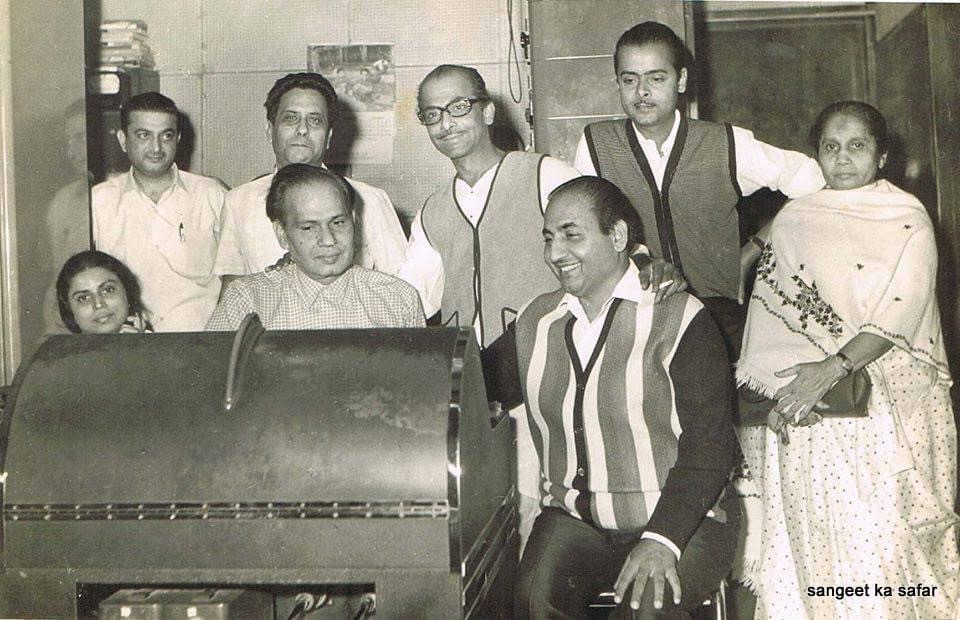