AMAANAT, a sacred trust or sacred custody involving sacrifices for the person under one's custody of trust, is one of the highest norms of civilisation developed by human society since the beginning of time. In fact AMAANAT is the essential quality that differentiates a human being from all other living animals, but for AMAANAT the human society would not have been developed from generation to generation and we would not have been different from what man was during the Stone Age. AMAANAT is the story of the sacred trust practised by a good human being even at the sacrifice of everything. Unfortunately in our human society there are also humans who are less than human and whose inhuman behaviour and selflessness causes all the strive and struggle between the force of good and evil.

Suresh, an honest, hard-working artiste, lives happily with his wife and son despite his meagre earnings. Unfortunately he becomes a victim of a mercenary couple who frame him up for murder. Now a fugitive from law, this man meets another disaster and it is during his disaster when the care of a baby girl is bestowed upon him by her dying mother. Suresh brings up the child with utmost devotion and sacrifice demanded of him for carrying out his human duties in preserving the sacred trust entrusted to him. The baby girl grows up into a blooming young woman named Suchitra, who falls in love with a young man, an orphan brought up by a well-to-do couple as their own son. This young man Deepak falls in love with Suchitra and yet Suchitra cannot accept Deepak as her husband, till her foster-father (Suresh) gives her the permission. Meanwhile, Deepak's friend Mahesh, a dealer in stuffed animals, falls in love with Suchitra's friend. Now both the couples try their level best to acquire the happiness of their life. But fate, which is the ruling factor in human life, intervenes to create testing, dramatic and impossible situations for the loving ones.

Who is Deepak? Is he related to Suresh? Do Deepak and Suchitra achieve their goal of life? Does Suresh come out from the quagmire of conspiracy against him and gets rid of the charge of murder, which he never committed or is fate cruel again to him, to his wife and to his son? These and hundreds of other pointers and posers are answered in the film AMAANAT with breath-taking actions, emotional interludes, humours goings-on, lilting romance and hauntingly melodious music, in this suspense-packed, emotional, musical and lyrical film.

In fine, AMAANAT is the struggle between good and evil, altrustic and progressive idealism and self-created rigid and stagnant evil which retard the progress of human civilisation. Yet this highly dramatic and emotion-charged film is designed as an entertainment from the first shot to the last because cinema means mass entertainment and mass entertainment is in fact the democratic need for our democratic nation. 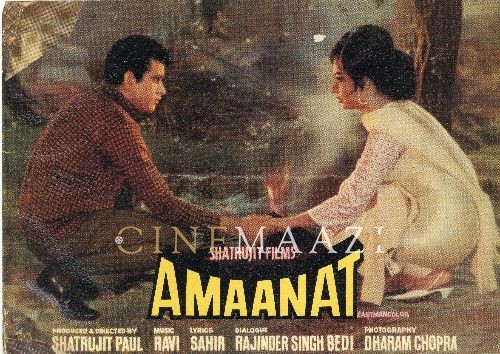