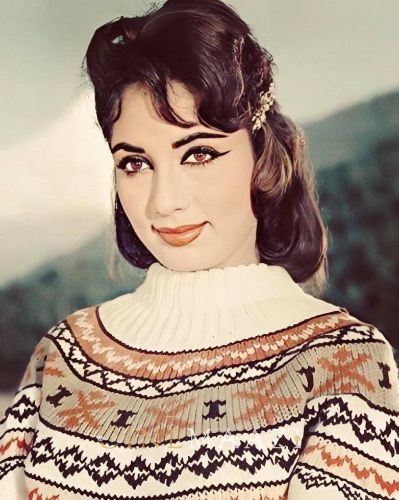 Remembered as the beauty whose cropped Audrey Hepburn-inspired fringe set a trend that is still referred to as the ‘Sadhana cut’, Sadhana is one of the most popular actresses of Hindi cinema of the 60s and 70s. Renowned for her beauty and talent, she defined style, elegance and grace onscreen. Amongst the highest paid actresses of her time, she had around 30 box office successes to her credit. These include Hum Dono (1961), Mere Mehboob (1963), Woh Kaun Thi (1964), Rajkumar (1964), Waqt (1965), Mera Saaya (1966), Anita (1967), Sachaai (1969), and Ek Phool Do Mali (1969). Nominated for the Filmfare Award for Best Actress for Woh Kaun Thi and Waqt, she chose to retire from the film industry in the mid-1970s before which she also directed and co-produced a few films. She was also dubbed the 'Mystery Girl', not only because she featured in a series of mystery films but also because she believed that an artiste should maintain a certain mystique, shouldn't become too familiar, and should not be seen too frequently by the public in order to nurture charisma and star-power.

Born on 2 September, 1941 in Karachi, Sindh, British India, Sadhana was apparently named after her father’s favourite actress, Sadhana Bose. Migrating to Bombay post-Partition, Sadhana was schooled at Auxilium Convent, followed by Jai Hind College. Inspired by Nutan to be an actress, it was Sadhana’s father who helped her enter films. She started off playing a chorus girl in the hit song, Mur mur ke na dekh mur mur ke in Raj Kapoor's Shree 420 (1955). She went on to be cast in Abana (1958), India's first Sindhi film, wherein she played the role of Sheila Ramani's younger sister. Noticed by leading producer, Sashadhar Mukherjee, she joined Mukherjee’s acting school along with his son Joy Mukherjee who was to be her debutant co-star. She was thus introduced in Filmalaya Productions’ Love in Simla (1960), a film that not only succeeded at the box office but also made it to the top 10 films of the year. She was groomed by the film’s director R K Nayyar, who was also instrumental in creating the ‘Sadhana cut’ hairstyle for her to disguise a high forehead. Incidentally, it was while working on the film that the teenaged Sadhana and the 22-year-old Nayyar fell in love, though the relationship was frowned upon by her parents.

Sadhana went on to feature as a simple village girl in renowned director Bimal Roy’s award-winning film Parakh (1960), which is memorable for the Lata Mangeshkar-rendered song, O sajna barkha bahar aai. The decade unveiled a red carpet of hits, beginning with Hum Dono (1961) in which she essayed Dev Anand’s love interest. Praise continues to pour in for her, as was witnessed when the colourised version of the film was re-released in 2011, and paeans were sung about Sadhana’s ‘expressive and captivating’ eyes. Incidentally, the duet from the film has also been declared as the most romantic song by Shah Rukh Khan and Sanjay Leela Bhansali. The following year she was paired with Dev Anand again in Asli-Naqli (1962) directed by Hrishikesh Mukherjee, with its songs Tujhe jeevan ki dor se and Tera mera pyar amar becoming especially popular. Cast opposite her debutant hero Joy Mukherjee again in director-screenwriter Raj Khosla’s Ek Musafir Ek Hasina (1962), her next, Mere Mehboob (1963) became the highest grossing Indian film of 1963 and featured among the top five films of the 60s. Woh Kaun Thi (1964) saw Sadhana essay a double role in what was to be the first instalment of a suspense-thriller trilogy. Her ‘intriguing Mona Lisa-like smile’ came in for special mention as she played the white-sari-clad mystery lady opposite Manoj Kumar, also bagging her first Filmfare Best Actress nomination. Her songs from the film - Naina barse and Lag jaa gale continue to haunt. Sadhana went on to star in two more successful mystery films, namely Mera Saaya (1966) and Anita (1967). This resulted in her being adorned with the ‘Mystery Girl’ label. If she had another box office success with Arzoo (1965), there was more to come with Mera Saaya (1966), the Raj Khosla-directed courtroom drama film in which she played a double role. Her song Jhumka gira re sent audiences into peals of delight, as they showered coins at the screen in cinema halls. It is also among the most requested songs on radio, even as the film’s other songs Mera saaya saath hoga and Nainon mein badra chhaye remain well-liked. She received her second Filmfare Best Actress nomination for the role of Meena, in Yash Chopra's ensemble cast directorial saga Waqt (1965). The film, a blockbuster hit of the year, included such musical hits as Aye meri Zohra Jabeen, and Hum jab simat ke. Anita (1967), a suspense film, saw her in the last film of the Khosla-Sadhana suspense-thriller trilogy. The year 1969 saw Sadhana return to the screen after a brief illness, with the hit Inteqam (1969) directed by R.K. Nayyar, which also featured the cabaret number Aa jaane jaan. Rajkumar (1964), Gaban (1966), Budtameez (1966),  Sachaai (1969), one hit followed another for the popular star. Ek Phool Do Mali (1969) pleased with its string of popular songs including Ye parda hata do, Aulad walo, O nanhe se farishte, Saiyan le gayi jiya and Tujhe suraj kahoon ya chanda.

She was also a fashion icon—besides the popular fringe that was all the rage in the 60s, Sadhana ushered the tight-fitted churidar-kurta into fashion, aided by fashion designer Bhanu Athaiya. The trend lasted well into the 70s.

Eventually, it was her health issues, namely a thyroid problem, that proved a serious hindrance to her career. Returning after undergoing treatment in the USA, her directorial venture Geeta Mera Naam (1974) was released. Produced by her husband R K Nayyar, she played the lead in the film with actors Sunil Dutt and Feroz Khan. It was to be her swan song, as she retired from acting, preferring not to be cast in side roles or character roles. Forming a production company with her husband, she also produced the Dimple Kapadia-starrer Pati Parmeshwar (1989).

Sadhana married her debut film director, Ram Krishna Nayyar on 7 March, 1966. They had fallen in love while filming Love in Simla but faced opposition from her parents on account of her being very young at the time. The couple was married for nearly 30 years, until R K Nayyar passed away in 1995. ‘Mystery Girl’ Sadhana later refused to be photographed owing to the changes wrought in her by hyperthyroidism.
She received the IIFA Lifetime Achievement Award for her contribution to Hindi cinema in 2002. Suffering from illness in the later period of her life, Sadhana passed away on 25 December, 2015 in Mumbai. 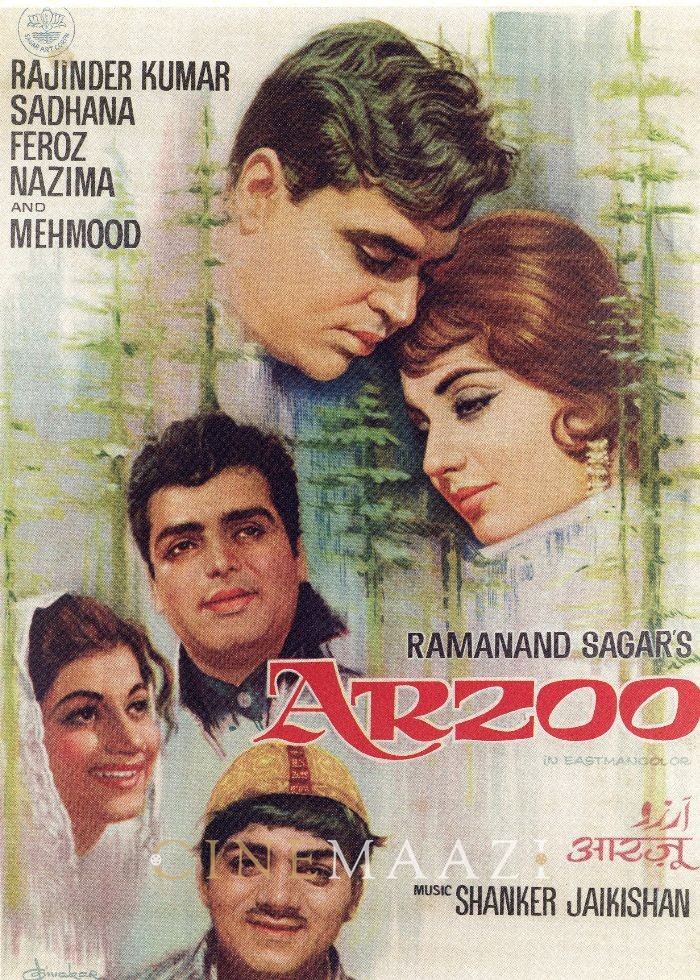 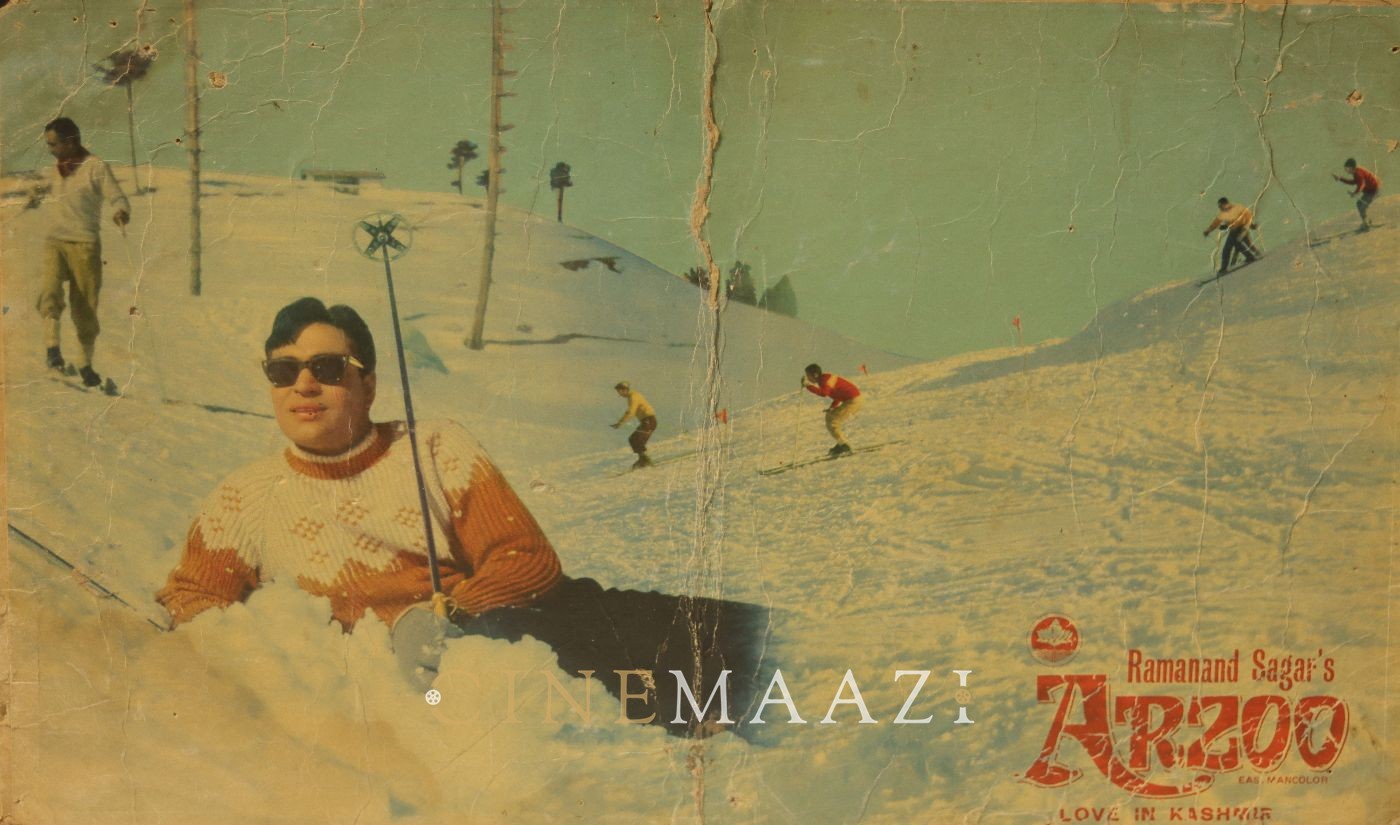 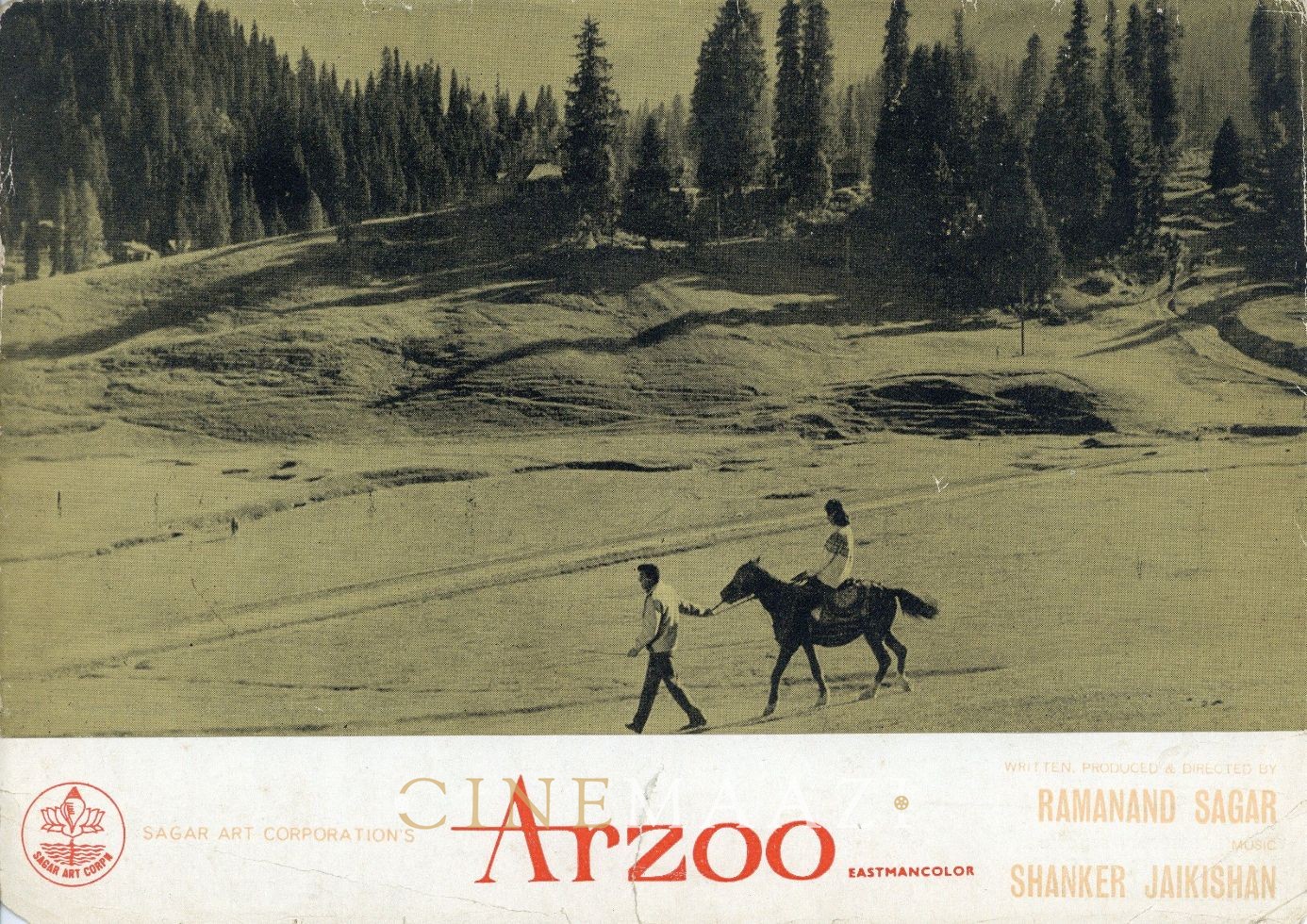 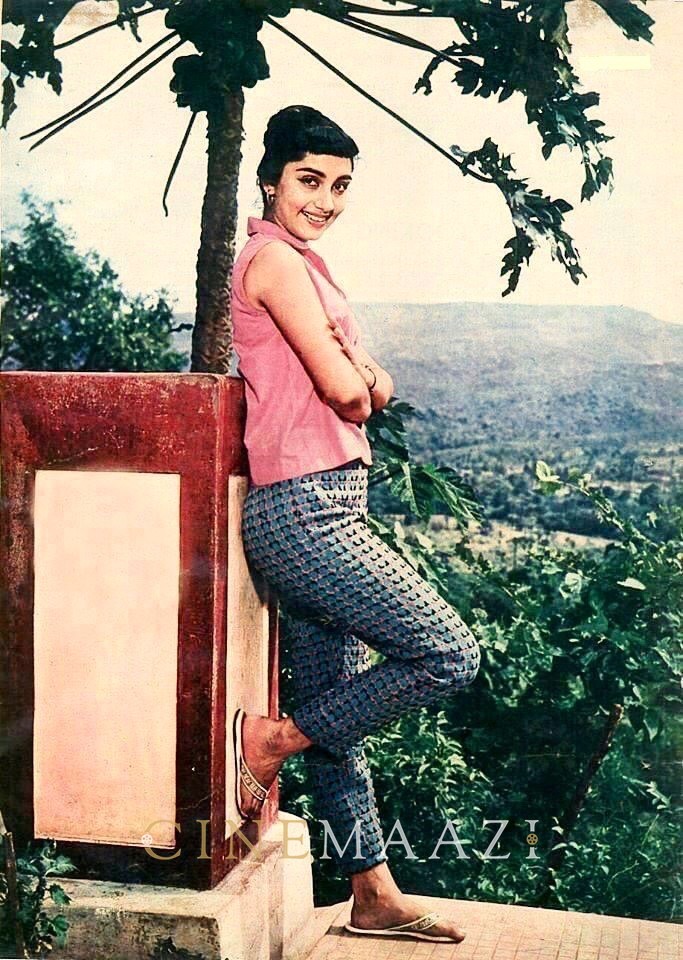 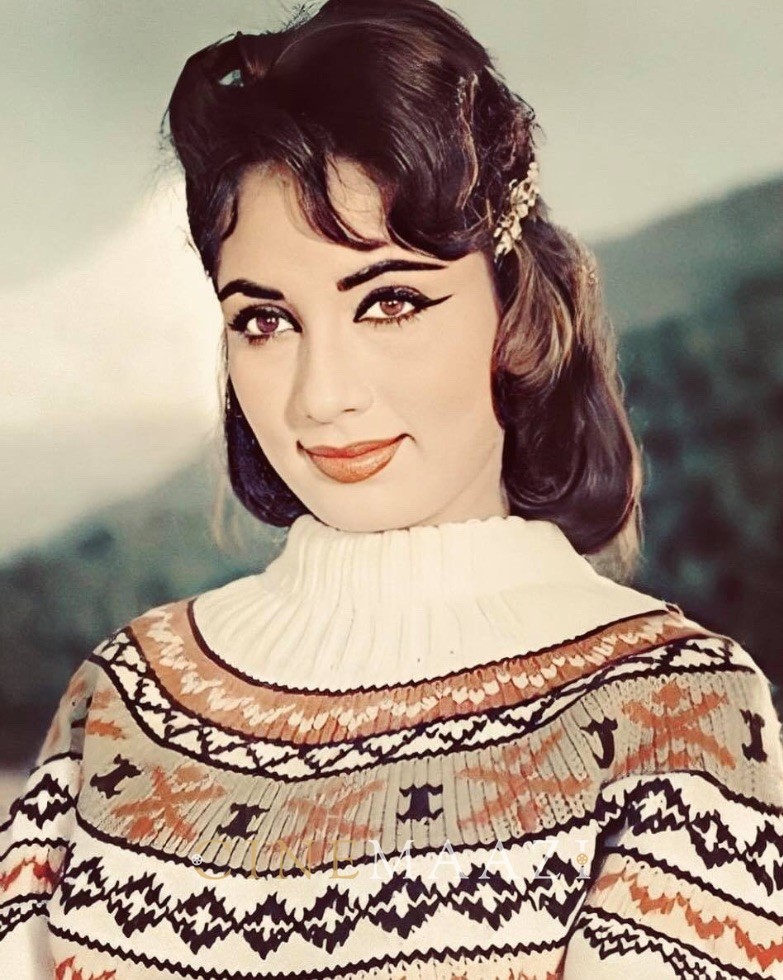 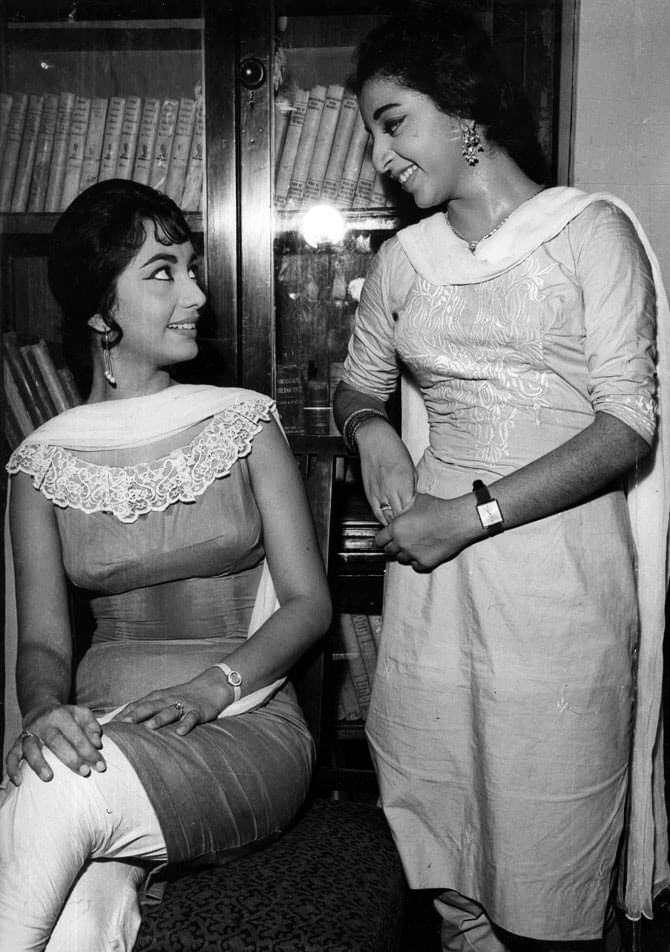 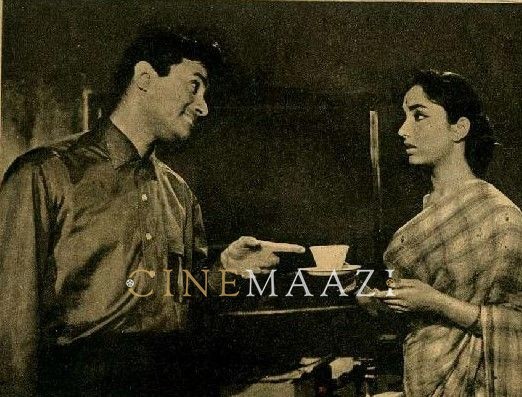 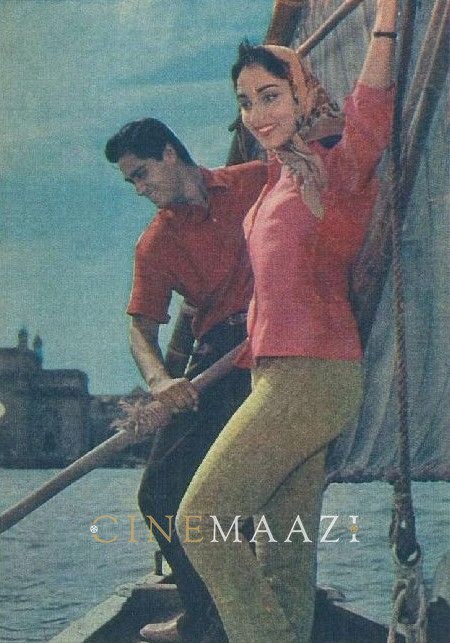 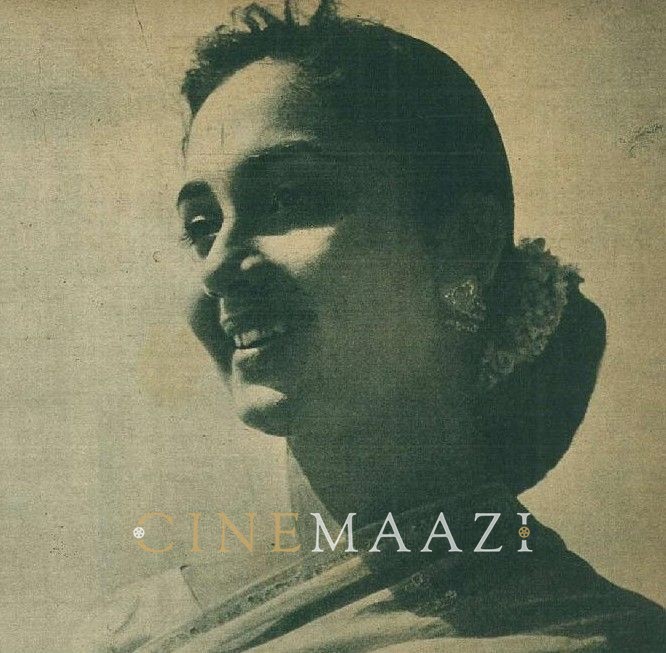 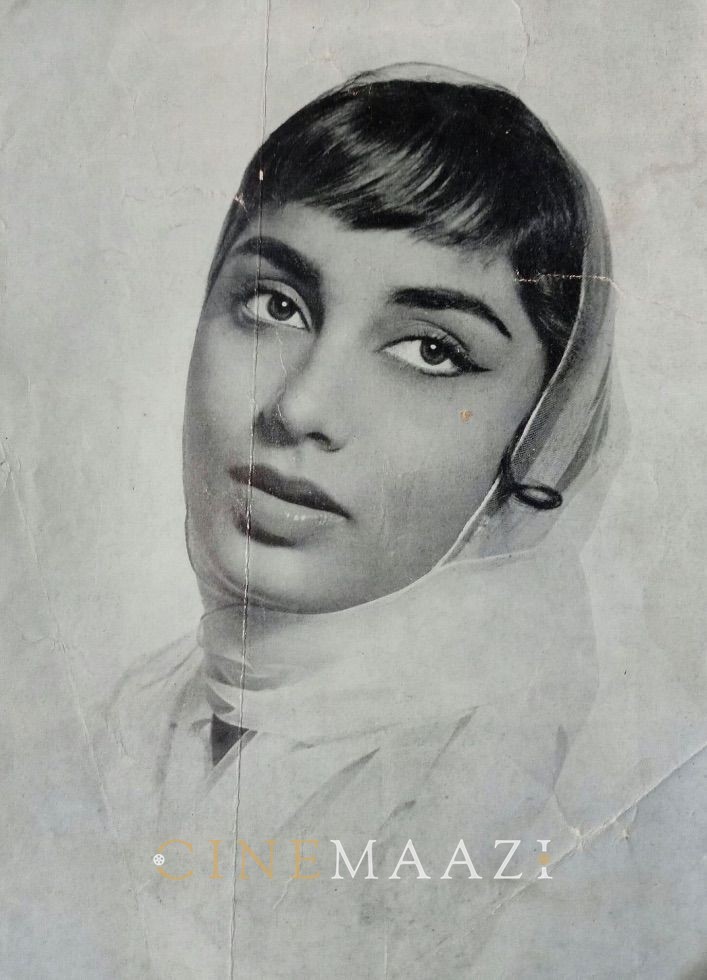 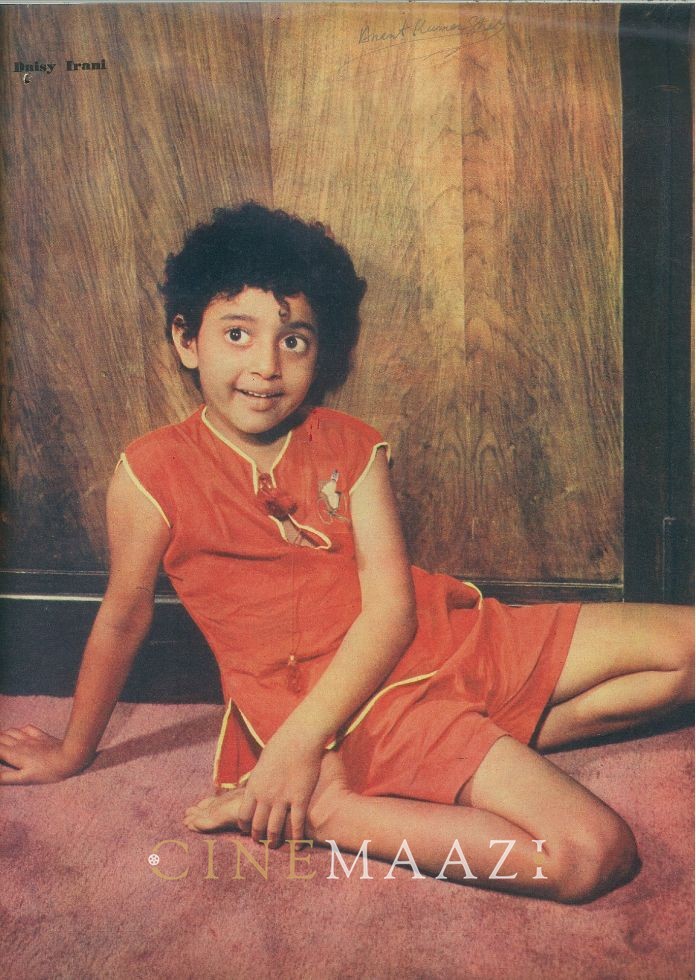