Arvind Desai Ki Ajeeb Dastaan begins in a small village with mud huts, where we are shown the elaborate process of manufacturing a luxurious carpet, which is then sold for a whopping price in a showroom in the city. Arvind is the son of a wealthy businessman who owns a showroom of luxury artefacts in the city. While Arvind holds the post of manager of the shop by virtue of his inheritance, the shop is primarily run by two men, Mahesh, Arvind’s cousin, and Gopal, an employee. Arvind comes to the office occasionally, and usually leaves with the secretary, Alice D’Costa, whom he is dating.

Though Arvind seems ineffectual and uninterested in the business, he drives a hard bargain with a middleman who tries to hike up the prices for carpets citing workers’ unrest. He tells him to take a smaller margin of the profit himself, and reveals his own awareness of his privileged position when he tells the contractor to pay the workers a higher sum. It soon becomes clear that Arvind takes a keen interest in discussing social issues like inequitable distribution of wealth, unemployment, and gentrification, but he feels trapped within his own position as a wealthy, advantaged young man.

Arvind moves from one space to another within the city, unable to confront the oppressive silence at home. We occasionally glimpse his devout mother busy in her prayers, and his refined, elegant father, who wishes his son to share his cultured sensibilities. Arvind’s friend, Rajan, has recently moved to the city. He holds Leftist sympathies, and teaches in a college. Arvind often visits him, but though there is an understanding between the two, it is tempered by their knowledge of the distance between them. As he drives around, Arvind recoils from the squalor of the city, and finds its pretensions to grandeur jarring and dissonant. Looking to relieve some of his frustration, he visits a prostitute with a large birthmark on her face, but this encounter leaves him feeling even more jaded than before.

Alice’s mother invites Arvind over to their house for lunch. After lunch, Arvinds asks to take Alice for a drive. Though her family is uncomfortable with their relationship, they feel put upon to allow it, something Alice seems to understand only too well. Arvind and Alice, while spending time with each other, struggle to share any meaningful intimacy: Alice is withdrawn and quiet, wary of forming too deep an attachment to such a wealthy man. Meanwhile, Arvind’s father is trying to arrange his marriage to his friend’s daughter, the beautiful, foreign-educated Maya.

At home, Arvind’s loneliness grows. His mother spends a great deal on religious charities, and his father is dissatisfied with this. When she is hurt by his father’s reproaches, Arvind attempts to console his mother, but she barely responds to him. Leaving home again, Arvind goes to visit Rajan with a few bottles of beer, and chances upon Rajan’s Marxist acquaintances discussing revolutionary literature. He attempts to absorb Rajan’s understanding of contemporary conditions in India, but his attention drifts to the sounds of the bustling city instead. Unable to fit in here either, Arvind goes to meet his sister, Shilpa.

Meeting Shilpa disturbs him further. He sees her future laid out for her: a woman confined to a sumptuous but empty life, and seeing his own loneliness reflected in her is almost too much to bear. Dissatisfied with this meeting, he returns home, and is drawn into a conversation with his father. The Seth reprimands Arvind for being lax about accounts in the shop, which has allowed Mahesh to embezzle funds from the store. Since Mahesh is their relative, he does not want him to be fired for his transgressions, and he lays on Arvind the responsibility to deal with the problem. With full knowledge of the hypocrisy of his actions, Arvind fires Gopal, who helped Mahesh carry out his clandestine operations from within the shop. In a bad mood, he has a spat with Alice, and abandons her on the road.

Driving alone, he gives a lift to a young couple, and while talking to them, invents for himself an idyllic life outside the city. When he leaves his car unattended, it is destroyed, and caught on the streets without it, he is attacked by an angry Gopal. He refuses to engage, and visits Rajan yet again. This time, Rajan shares with him his own frustrations: the large gap between his beliefs and his actions troubles him daily. Filled with a sense of growing hopelessness, Arvind comes back to the store and puts a pistol to his head. Though he cannot bring himself to pull the trigger, he accidentally fires the pistol into his own chest while cleaning it, and bleeds out on the luxurious carpet that lines the office floor.

Arvind Desai Ki Ajeeb Dastaan was the debut film of the renowned director Saeed Akhtar Mirza. It was produced by the Yukt Film Co-op, set up by Mirza, Hariharan, and Mani Kaul, along with others like Kamal Swaroop, Om Puri and Ashok Tyagi, in order to undertake exercises in collective film-making. 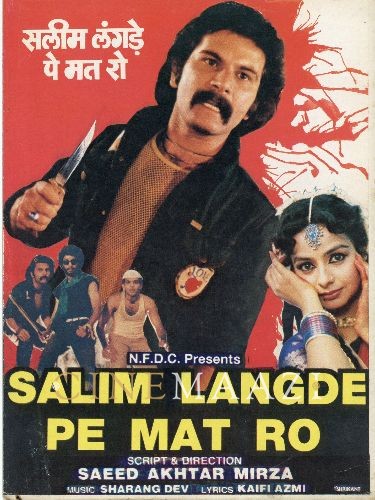