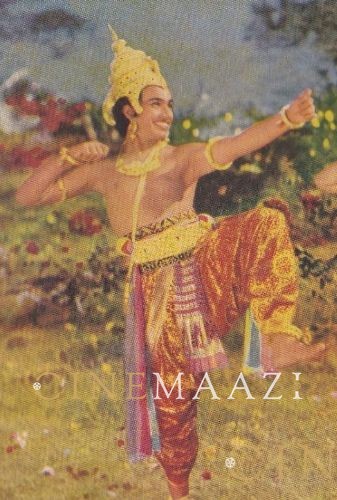 Acclaimed Indian dancer, prolific choreographer, and actor Gopi Krishna was an exponent of the Benares gharana style of Kathak. His immense creativity saw him also incorporate multiple elements of Kathakali and Bharatanatyam in his dance. Just 15 when he received the title of Nataraj (King of Dancers) at the All Bengal Music Conference, he choreographed the dances for Madhubala in Saqi (1952) when he was 17 years of age. A sought-after choreographer in Hindi films, he choreographed for approximately 70 films such as Jhanak Jhanak Payal Baaje (1955), Ghunghat (1960), Jab Pyar Kissise Hota Hain (1961), Grahasti (1963), Amrapali (1966), Suhaag Raat (1968), Heer Ranjha (1970), Reshma Aur Shera (1971), Bawarchi (1972), Namak Haram (1973), Do Anjaane (1976), Khubsoorat (1980), Umrao Jaan (1981), Razia Sultan (1983), Jaag Utha Insaan (1984), Tawaif (1985), Eeshwar (1989), Rajnartaki (1991), and Zid (1994). He also featured onscreen in approximately 30 films such as Jhanak Jhanak Payal Baaje, Bharat Milap (1965), Ram Rajya (1967), Har Har Mahadev (1974), Rocky (1981), Zamana (1985) and The Perfect Murder (1988). His performances radiated ‘individualistic interpretation, showmanship, uncanny tempo and imaginative temperament’. Marked by a unique, individualistic touch, his contribution in the field of choreography is equally significant. Composer of several solo dance ballets, he was also the first to divide the continuous Kathak style repertoire into distinctive items. This practice went on to be followed by other exponents of Kathak.

Born on 22 August, 1935 in Calcutta into a family entrenched in Kathak, his maternal grandfather Pandit Sukhdev Maharaj was a teacher of the dance form, while his aunt Sitara Devi was known for performing Kathak across the world and also in films. His mother Tara, the eldest daughter of Sukhdev Maharaj, was a noted thumri singer. Dancing naturally from the age of four, he was 11 when he started his rigorous training in dance under his grandfather; later he would also learn from the popular Shambhu Maharaj. Along with Kathak, he also learnt Bharatanatyam from Mahalingam Pillai and Govind Raj Pillai from the school of Sri Raj Rajeshwari Bharat Natya Kala Mandir. Despite his health challenges—he suffered from chronic asthma—he pursued his passion, expanding his repertoire, and was just 15 years of age when he was bestowed the title of Nataraj (King of Dancers) at the All Bengal Music Conference.

He made his debut as a choreographer in films just two years later when, as a 17-year-old, he was assigned the choreography for Madhubala’s dances in the film Saqi. He went on to make his onscreen debut in the film Jhanak Jhanak Payal Baaje (1955), essaying the role of Girdhar, a young and gifted dancer whose career in dance is threatened by his love for his partner. Songs such as Nain so nain naahi milao from the film, rejuvenated public interest via this classical dance. He played a major role in giving classical dancing a new status and new dimension in this celebrated film. A milestone in the history of India's dancing and cinema, it demonstrated the rich yield that classical dancing could bring, blended accordingly and used properly. With this film, he won fame across the country. His dances in the film would establish his trademark; namely the high-speed Kathak chakkar pirouettes!

In Aandhiyan (1952) his signature spins and back-leans are showcased, while the Kannada film Mane Thumbida Hennu (1958) shows him performing perhaps his best Bharatanatyam/ Kuchipudi-inspired dance on film with E.V. Saroja. His Bharatanatyam style was infused with his effortless energy, even as his Kathak radiated force and presence. The Perfect Murder (1988, English) portrayed him teaching the heroine dance in a scene, and displays his love for dance which endured over the decades.

Gopi Krishna’s film dances proved to be marked by ‘acrobatic freeform furore’ as opposed to conventional classical Kathak. They were rendered electrifying with uninhibited energy that flowed through a series of rotations, backbends and quicksilver movements. It can be said that no male dancer in Indian films came close to matching his style of joyous abandon. His dances featured ecstatic movements, quick transitions, multiple spins, and fast-paced movements inspired by classical dance.

In dance duets he was usually paired with a female dancer who could match steps and energy with him, and possessed a similar inborn joy for dance. These included talents such as Madhumati, Vyjayanthimala, Kamala, Priyadarshini, Helen, and Roshan Kumari.

Continuing to leave his mark in the realm of dance, he set a world record for the longest continuous Kathak dance at 9 hours and 20 minutes. The 1960s and 1970s also saw him touring India's border posts, where he would entertain soldiers with Sunil Dutt’s Ajanta Arts Cultural Troupe. He later established the Nateshwar Bhavan dance academy and the Nateshwar Nritya Kala Mandir in Khar in Bombay.

Recipient of several distinctions and honours, besides the title of Natraj, he was also awarded the distinction of Nritya Samra in 1966 by the Prayag Sangit Samiti Allahabad.

Married to Kathak dancer Savitri in 1964, his adopted daughter Shampa Sonthalia is also a choreographer and dancer.